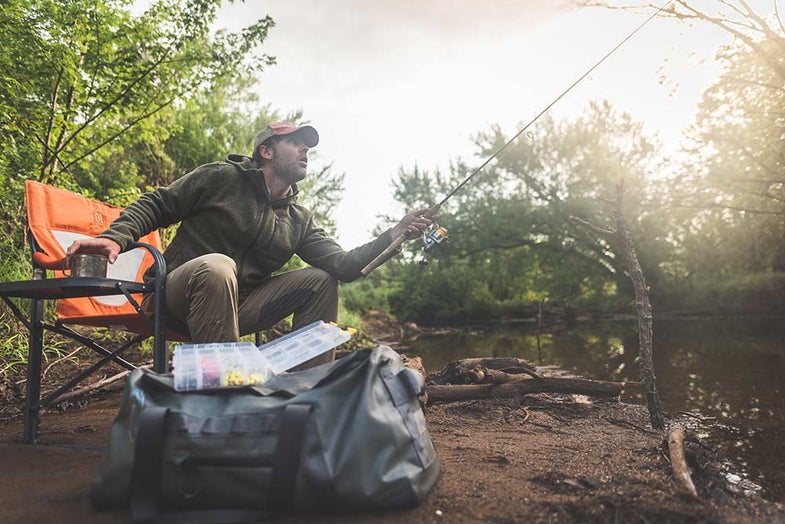 I’m checking out a clearance rack of fox pelts while Tom tries to make arrangements with a cranky canoe shuttle guy. It’s Monday morning, and we’re rendezvousing at a gas station just outside the small Wisconsin town of Dairyland. Despite the preponderance of cheese in all its forms—curd, block, string and wedge—I would have named the town Bassville. Just a few miles away flows the upper St. Croix river—ground zero for smallmouth bass—and Tom and I have been meaning to fish it for years. The guy puts Tom on hold and I head over to check out some beaver fur mittens, priced to move at $180.

I shrug and hang the mittens back on the display, right next to a wall of jerky guns.

This is, if you can’t already tell, not your everyday—or even every year—smallmouth bass float. “50 Miles to Freedom” is the going name for this adventure, though we’re also considering “Journey to the Center of the Bass” and “Close Encounters of the Bass Kind”. Whatever the moniker, the plan is simple: to put in as far upstream on the St. Croix as we can and Huck Finn it for a 5 full days, camping on the bank each night and seeing how far we can go. It’s a trip born of two beliefs. First, that to really honor a river as legendary as the Croix you must follow the course and take what it gives you, not cherry pick its best beats. Second, that in the latter half of summer, on the lee side of the vernal equinox, there’s no better way to pass a week than chasing big smallmouth.

We check out a few launches before settling on a bridge crossing with just enough water to float the raft, load our gear—we were utilizing some of the new Guide Life base camp products—to the hilt and go, two drag-free drifters with no clock but the sun and no direction but downstream.

It’s one thing to float an unknown stretch of water. It’s another to do it for 5 days. We get to see the river in all its shifting glory, here a one-mile scrape of gritty sand, there a hundred-yard hole where mammoth smallmouth sulk like waterlogged footballs. At least four times a day we encounter rapids so bony we have to hop out and walk the raft—how neither of us lost a foot in a crevice is a miracle. I’ve fished more than is reasonable for several life times, but I’ve never felt quite so deserving of the respect of my quarry as now.

Our effort is well compensated. Over the course of the week we bear witness to the full catalog of smallmouth bass eats, all in water so clear you sometimes feel like you’re floating on air. There are bass busting sucker pods like bowling pins as they chase our baitfish imitations. Bass exploding in greasy slicks to smash our poppers. Bass that fight each other for our jigs and bass that refuse to eat at all.

After four days and countless fish our feet are pruned to the point of dissolving, our landing thumbs are mangled, and we have sand in every craw. In other words, perfection. It’s been an amazing week of big healthy fish, but now with the end approaching a new question emerges: what note do you end such an epic trip on? For me it’s a no brainer. From my chest pocket I produce a clear sandwich bag inside of which sits a single yellow popper, given to me by the legendary Lefty Kreh during the last few months of his life. As the Godfather, Grandfather and Original Gangster of American fly fishing, Lefty had fished with some of the biggest names of the 20th century, and this fly puts me one degree of separation from the likes of Ernest Hemingway, Ted Williams, even Fidel Castro. On receiving the gift I had promised myself never to fish it, but a legendary bass river calls for a legendary bass bug. I like to think Lefty would have agreed.

Read Next: Rafting and Camping for Wisconsin Wilderness Smallmouths

On the third cast a large bass untucks itself from a logjam, stares the bug right in the face, and sips it delicately as hot soup. Two jumps and four charges later and it’s in the net, not the biggest fish of the trip but close, and perfect in every way.

I release the fish, get back up in the casting brace and scan the horizon. A promising trench appears at two o’clock, and I get ready to cast.