A father-daughter duo taped out the gar at more than eight feet, but opted to release it instead of weighing it for the youth record books 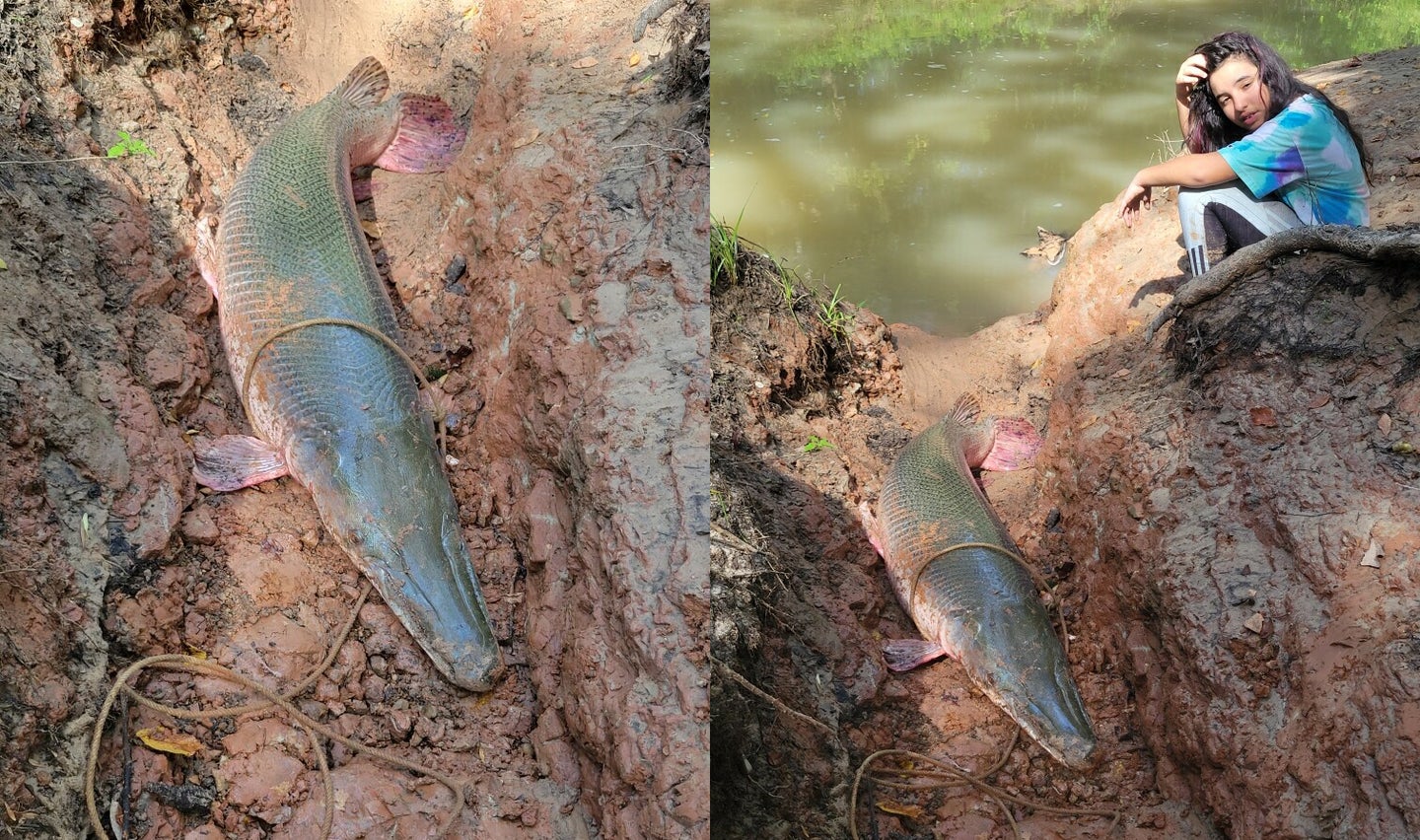 Emily Myers, 10, with her personal best alligator gar, which measured 8 feet long. If it had been certified, the fish likely would've taken the new youth state record for the species. Courtesy of Paul Myers
SHARE

Houston fifth-grader Emily Myers landed her personal best alligator gar while fishing with her dad, Paul Myers, in a greater Houston area waterway on Sunday. The 8-foot gar was nearly twice as long as the 10-year-old is tall.

The Myers fish together often, and Paul has caught at least five 8-foot gar in more than a decade of fishing the area. This time of year, he rigs several Shimano Baitrunner 12000Ds with 125-pound braid and 500-pound hollow core, then baits the 1/0 hooks with cut tilapia.

“I sharpen the hooks myself so they’re extra sharp, and set them early for safety [of the fish],” Paul, a Houston teacher, tells Outdoor Life. “I’d rather lose a fish than kill one. They’re older than we are.”

Paul was setting up his rods with help from Emily, noting that his elder daughter knew exactly what to do. She’s been fishing since she was three and is, according to her dad, “very bright” and a nature lover.

“She cast-netted her own bait, she got the bait in, she knew what bait to go for in these conditions, she [was aware of] the water level, she knew exactly where to place her bait,” says Paul. “I hadn’t even gotten the third rod out when she started screaming, ‘Daddy, Daddy!’”

Emily grabbed the bent rod as her dad cheered her on. The fight lasted just over 10 minutes as she fought the big female toward the bank.

“What took a long time was me getting the lasso around the fish and making sure it didn’t hit the gills,” says Paul. “It’s a big fish, and it was thrashing around down there.”

He slipped a rope over the gar’s head and wrestled it out of a crevice and onto the shore. The fish measured 96.5 inches long with a girth of 47 inches. (He says he wished he’d snapped photos of the gar with the tape on it, but that the measuring tape was only 60 inches long and made things difficult.)

“Woah look at that thing,” says Paul in a Facebook video that he broadcast live on Sunday. “Say something Emmy—come a little closer, I can’t [move the camera] up that far—I don’t want anybody to even attempt to see where we are.”

The father-daughter team regularly fishes around the Houston area for gar and catfish, and Myers carefully guards his spots to protect the gar from too much fishing pressure. Emily doesn’t appear to say anything in the video, but her wide smile in the photograph says plenty.

If the Myers had officially weighed the gar, it would likely have become the new youth state record for the species. Its length outstripped the current youth alligator gar record by 3.5 inches. That 192-pound fish was caught on a flat shad Rat-L-Trap in 2007. Paul knew that his daughter’s fish was likely the new record at the time of the catch—he mentions it in his video and later estimated the weight of the gar around 225 pounds—but the two opted to tape it, snap a few photos, and release it instead.

“I let her choose,” says Paul, who doubts the fish would’ve survived the time and stress of weighing. It was an easy decision for Emily to forgo the record. “She didn’t care about a piece of paper. She’s all about the experience, and the fact that she’s been after an 8-footer, at her age, that’s bigger than anything she has ever caught.”

Shortly after releasing the huge gar, they landed another that taped out at 6.5 feet “literally two minutes after the big girl swam off.”

The fifth grader described her fish as “really heavy,” and told the Houston Chronicle that her next fishing goals include landing an 80-pound flathead, a 100-pound blue cat, and an 80-pound hammerhead. Emily has never been shark fishing, says her dad, but she’s eager to try.