Jack Mensing harvested the rare fish while bowfishing at night 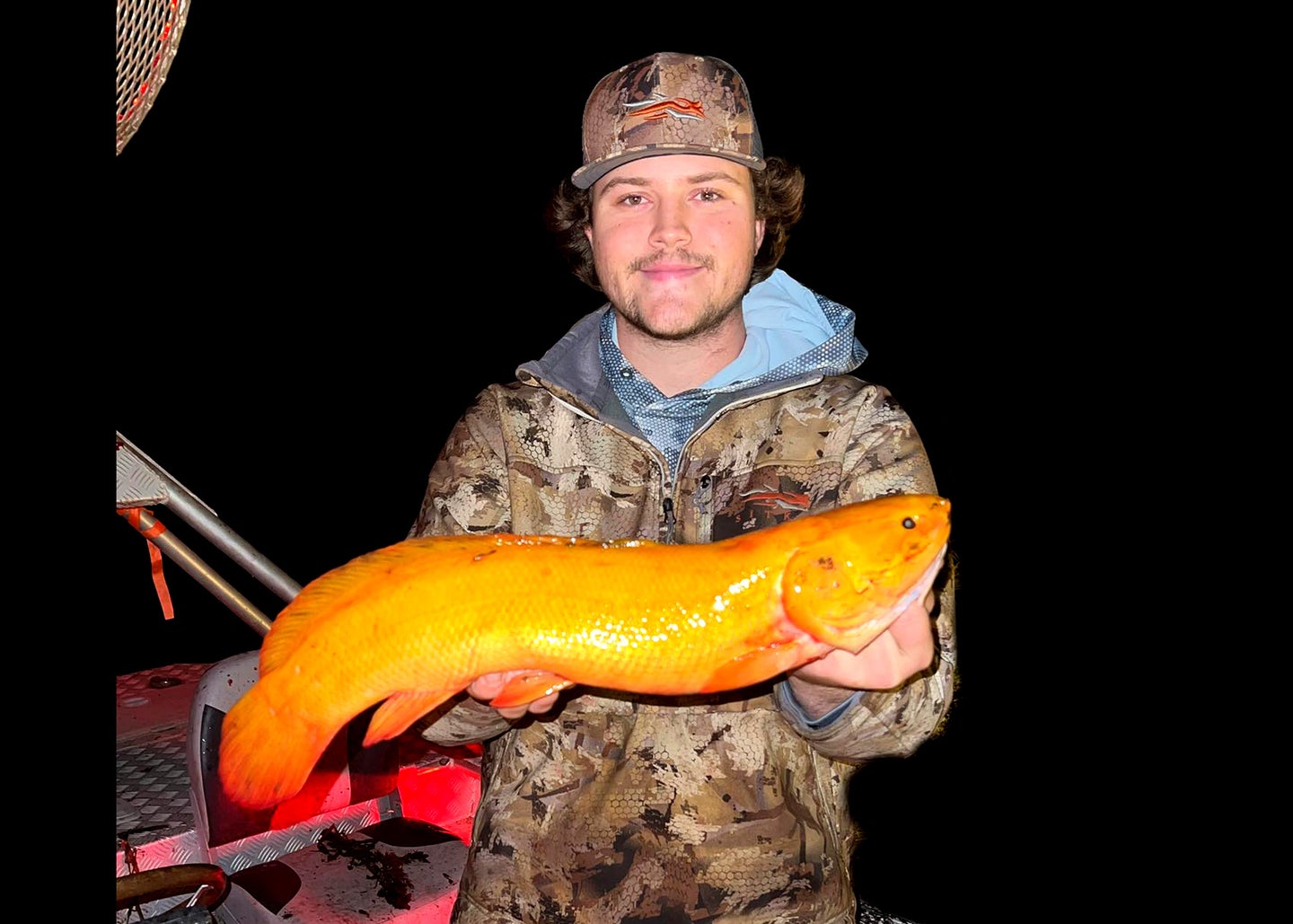 A bowfisherman in Minnesota arrowed a rare, golden bowfin over the weekend. Jack Mensing, of Perham, Minnesota, harvested the fish while out at night with a couple friends, and he shared photos of the bowfin to Facebook on Oct. 23.

“Last night was a night I will remember for the rest of my life,” Mensing wrote on Sunday. “This fish could possibly be one of the only ones ever documented in the entire world.”

Solomon David, an aquatic biologist and professor at Nicholls State University, would agree. He told Newsweek that he had never seen a golden bowfin in person or in photos, and he called the fish “extremely rare.”

David explained that the unique coloration of the bowfin can be attributed to a genetic mutation called xanthochromism, which causes an animal’s skin to turn orange or yellow. There are other examples of what David called “xanthic morphs” in the fishing world, and at least a couple have been caught in the Midwest this year. In July, a Michigan angler caught a neon-orange smallmouth from the Muskegon River, and in February, a Minnesota ice fisherman pulled a golden crappie from Clear Lake.

“These individuals seldom reach adulthood because they stand out to predators,” David said. “The fact that this was an adult ‘gold’ bowfin makes it even rarer, it was able to evade natural predators and beat the odds up to the point it was shot by the bowfisher.”

Read Next: The 10 Most Underrated Freshwater Fish

It’s unclear what body of water Mensing and his friends were on the night of Oct. 22, but judging from their photos, the archers were primarily targeting carp when they came across the golden bowfin.

Bowfin are one of the oldest species native to eastern North America. Their historic range included the Great Lakes, Mississippi River Basin, and watersheds throughout the South, according to USGS. They have lost some of that habitat over the years, but there are still healthy pockets of bowfin scattered throughout the Midwest and Southeast. The species has also been introduced to several states in the Northeast, including New Jersey and Pennsylvania.

Although they aren’t considered a trophy gamefish by many anglers, they should be. Bowfin are aggressive, hard-fighting fish that will smash artificial lures and destroy light tackle.