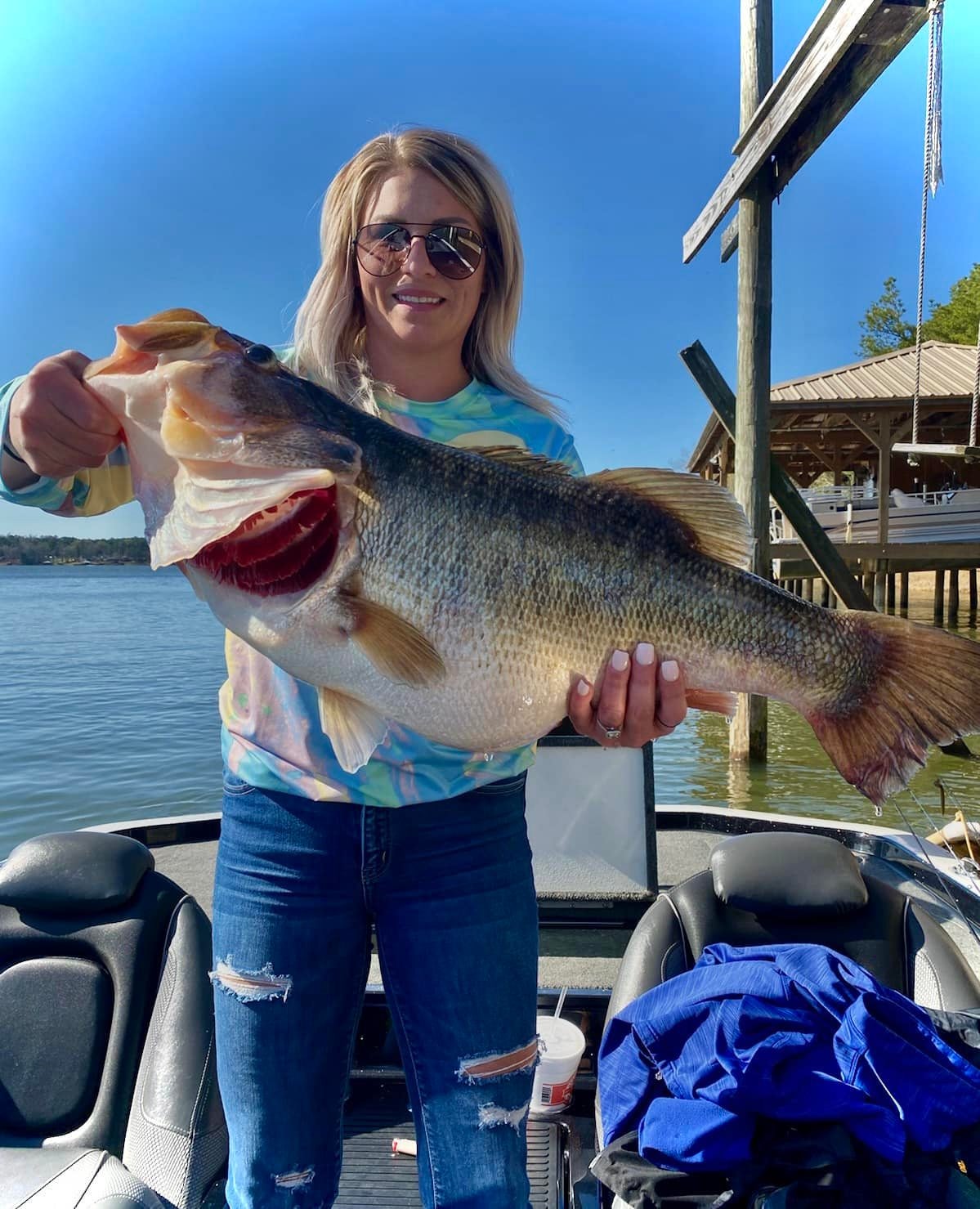 Renfro said that she and her husband caught the fish on a "last minute" trip to the lake. TPWD
SHARE

Kellie Renfro and her husband didn’t have a lot of time to fish last Thursday when they took a quick trip out to Lake Nacogdoches. They had to make it to their kids’ baseball practice in a few hours. But as it turns out, they didn’t need very long. Renfro was able to put a 13.27-pound largemouth in the boat, making her the first woman in almost four years to catch a Legacy Class ShareLunker in Texas, KLTV-7 reports.

Renfro told the local news that shortly after making the “last minute” decision, they were on their boat fishing a lake point and her husband caught a 2-pound fish. He then told her to cast from the front of the boat, and when she did, something grabbed her bait right away.

Renfro was using a spinning rod rigged with a V&M Baby Swamp Hawg soft-plastic lure. She said at first, the bite felt like a snag.

“I turned to my husband and said, ‘Well, I’ve hooked a stump,’” Renfro told KLTV-7. “Seconds later, that’s when she started pulling drag, and that’s when I realized I had just hooked into the largest fish I have ever felt.”

Renfro said the fish pulled some serious drag, jumped twice, and took her all the way around the boat before her husband grabbed the net and “made the perfect scoop to get her in the boat.”

After realizing just how big the bass was, the two headed for the dock and contacted the ShareLunker program. Texas Parks and Wildlife Department sent someone out from the Freshwater Fish Hatchery in Athens to weigh the bass and collect data, and they used an official scale to confirm the bass’ weight: 13.27 pounds. The heavy female was 26 inches long, with a 23.5-inch girth. Aside from being Renfro’s personal-best largemouth, the 13.27-pounder was also the first ShareLunker of the season from Lake Nacogdoches.

TPWD confirmed that Renfro is the first woman to catch a Legacy Class ShareLunker (13-plus-pounder) in almost four years. The last Legacy Class entry made by a woman in the state came from Stacy Spriggs of Huntsville, TX, who caught a 13.06 bass during a tournament on Sam Rayburn Reservoir on March 31, 2018.

TPWD also explained that the big, egg-laden female was released into Lake Nacogdoches soon after she was weighed and measured. Typically, the fish would have been taken to the hatchery in Athens, but a spokesperson with the agency said that with all the 14- to 16-pound fish they’ve taken in this year, the “Lunker Bunker” is starting to reach capacity, and they’ve had to be more selective than usual.

Read Next: Two 14-Pound Bass Kick off the 2022 ShareLunker Season in Texas

TPWD’s Toyota ShareLunker program runs year-round. The program allows anglers who catch bass over 8 pounds to loan these fish to TWPD, where they are added to the state’s selective breeding and stocking program that aims to enhance largemouth bass genetics in Texas lakes. To qualify for the Legacy Class, anglers have to catch a bass over 13 pounds and loan it to TPWD during the spawning period, which runs from January through March.