This 164-pound paddlefish will go down in the books 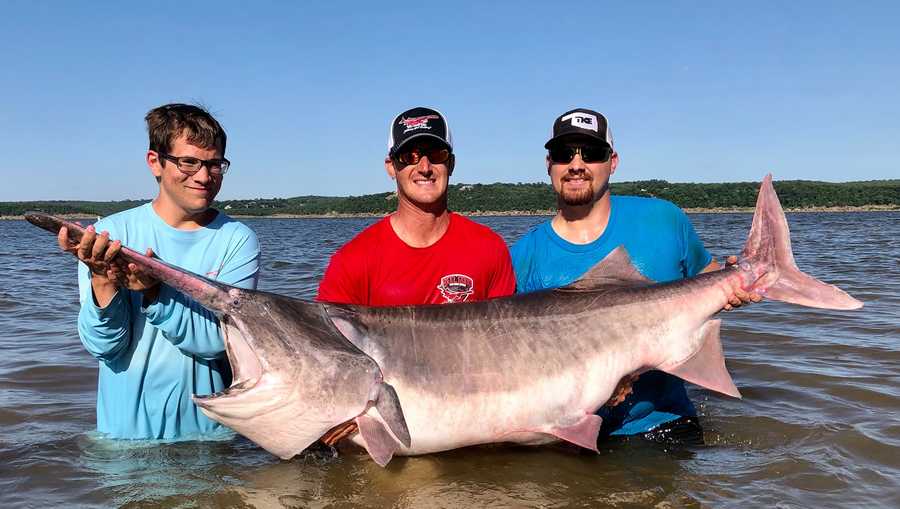 Grant Rader, age 18, had just graduated high school and made a celebratory trip with his dad and grandfather from his home in Wichita, Kansas to Keystone Lake, Oklahoma, reports CBS-TV6 in Tulsa. It turned out to be a historic trip that landed a world-record paddlefish.

Keystone is widely known as a home to many record-weight paddlefish, and that’s what the anglers wanted. They were fishing with noted guide Jeremiah Mefford when Rader caught a giant 164-pound paddlefish that tops the current world record of 151.9 pounds caught by Cory Watters, also taken at Keystone Lake.

Mefford had guided two other anglers to paddlefish world records on Keystone. And when Rader hooked his fish and got it close, Mefford recognized the giant as the same one a client caught in February 2020. That fish weighed 157 pounds, but was never certified as a world record, and was released.

Mefford knew Rader’s fish was the same one caught in 2020 by an unusual marking on it.

“It’s got a big, black spot on the same location as that 157-pounder, Mefford said. “As soon as I saw that thing crest the top of the water, I knew exactly what fish it was. I’ve been looking for her for over a year.”

“Before coming here [my biggest catch] was a 6-pound bass at a neighborhood pound,” said Rader, who was born with a rare form of muscular dystrophy. “It was heart-pounding, [most] exciting moment of fishing for me. I can’t describe it, it’s one of the greatest things ever to be able to pull in that kind of new state and world record.”

State fisheries biologists officially weighed and certified Rader’s paddlefish catch, with paperwork properly documented with witnesses. Rader and his family are still awed by the catch.

“We might have to make this an annual trip,” said Terry Rader, Grant’s grandfather. It seems that Rader was on a hot streak—the night prior to his world-record paddlefish catch, he won $1,000 at a casino.