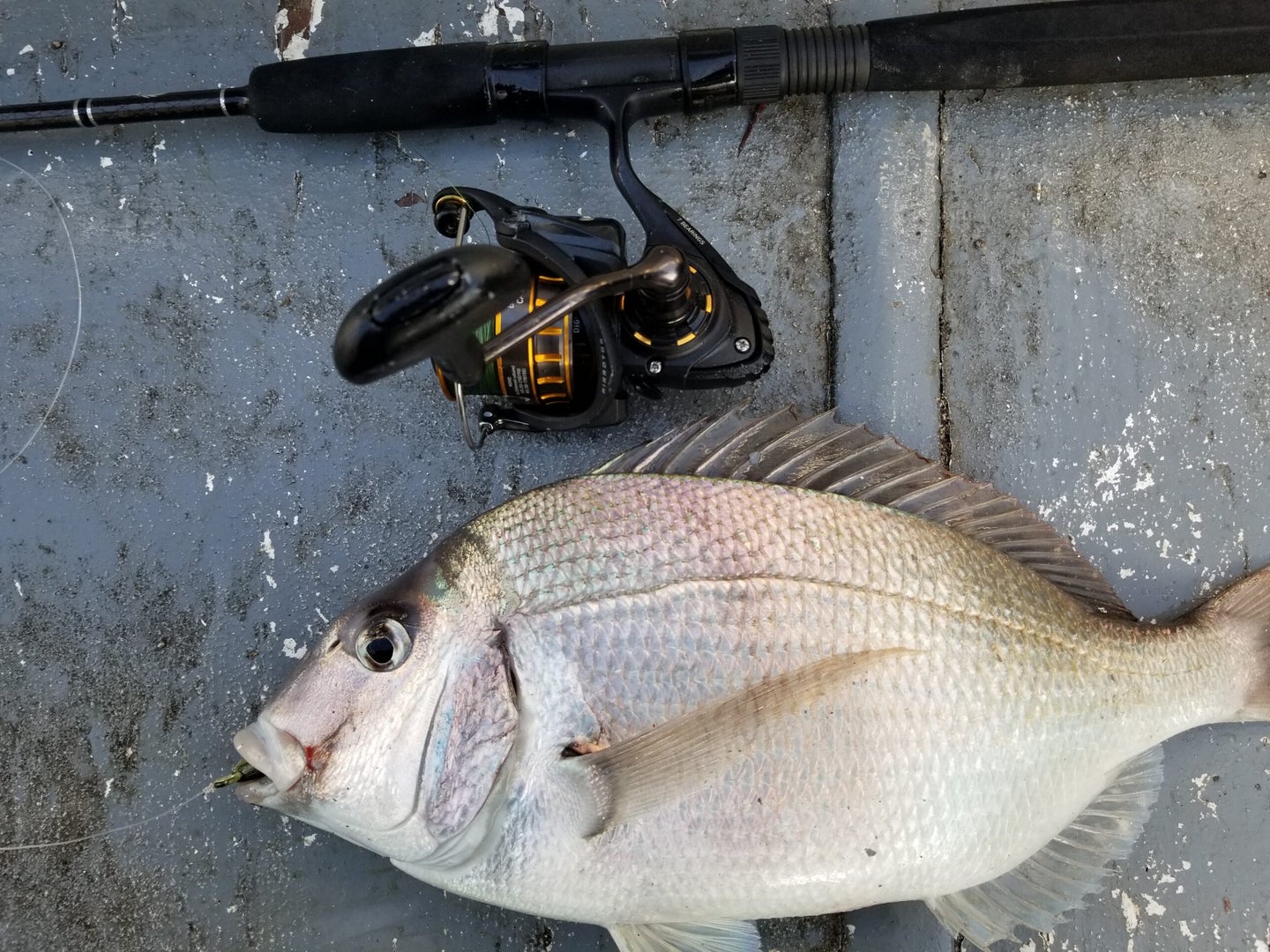 The Daiwa BG caught this porgy off of Long Island. John Skinner
SHARE

I have to confess that I sometimes lose track of reel prices. The three main spinning reel brands that I use are Penn, Tsunami, and Daiwa. Among those are multiple models that range in price from around $100 to $400. I know which reels are best for different applications, and I have a feel for where each reel falls on the quality scale. So when I sat down to write a Daiwa BG spinning reel review, which I’ve had for five seasons, I thought I was writing about a $150+ reel that was on par with the Penn Spinfisher and Tsunami Evict.

When I went online to nail down the exact specs and price range, I was very surprised that, even in this day of price increases, the reel was priced at only $110. In my defense, I have good reasons for overestimating what I thought this reel should cost. The Daiwa BG is a saltwater spinning reel that punches well above its price.

When the topic of the best saltwater spinning reels for $100 comes up, the BG is always in the conversation. It has a track record for being one of the best spinning reels for the money because it has a lot of premium features found on more expensive Daiwa reels. Those premium features have fancy names that sound good, like DIGIGEAR, Air Rotor, and Automatic Tournament Drag. Those features might sound promising, but do they actually do anything? Here are my findings after five years of fishing the Daiwa BG 2500.

Many reels start out very smooth, but after a season or so you can start to feel the gears. This doesn’t mean the gears are about to fail, and they may in fact last many years, but the initial smoothness and sensitivity that you felt out of the box is diminished. But, after five seasons of use, my BG remains as smooth as any brand-new reel at any price.

Reel companies have all sorts of brand-specific names for the important features on their reels. Digigear applies to the gearing on the Daiwa BG and is defined as “digitally engineered gear design that ensures a perfect mesh between the ultra-tough drive gear and pinion gears for optimized speed, power, durability and smoothness.” I can vouch for this not being an overstated gimmick. I have never owned a reel that stayed as smooth as the BG after several seasons of use.

My 2500 is spooled with 10-pound-test braid and is used for a variety of light tackle applications such as weakfish and porgy jigging, along with casting for speckled trout and redfish on the Southwest Florida flats. A charter captain friend of mine who specializes in blackfish (tautog) jigging uses the reel for that application. Neither of us have had any gear issues, and when I checked out his reel in preparation for this article, I found it to be as smooth as mine. Charter businesses are known to be pretty tough on tackle. Daiwa states that their gears are 20 to 40 percent larger and have a larger tooth pattern than those on competitors’ reels of equivalent sizes, resulting in extended gear life.

Air Rotor is another one of those feature terms used by Daiwa. They say it “delivers a great leap forward in rotor design and function and delivers the ultimate reel sensitivity and rotational balance.” Again, given the exceptional smoothness of my reel after several seasons of use, they will not get any arguments from me. Smoothness in a spinning reel isn’t just about comfort. The increased sensitivity it provides can translate to more fish hooked in finesse applications, such as working unweighted soft plastics across a shallow flat.

ATD Drag stands for Automatic Tournament Drag. That’s a pretty meaningless name, in my opinion, but their description is indeed interesting and addresses an issue I’ve noticed with drag systems that is rarely discussed for spinning reels. Daiwa says the ATD Drag “uses an improved drag grease that exhibits a low viscosity at rest, yet becomes more viscous immediately after drag startup. This reduces initial drag start-up inertia and, combined with the structural changes of the ATD Drag System, results in a smoother drag from the initial hookup.” It’s their mention of “initial drag start-up inertia” that gets my attention in a big way.

I set drags as tight as I can without having to worry about breaking the line. This comes from the species and environments that I fish. Stripers and blackfish are always headed for rocks, snook want to get into the mangroves and dock pilings, and grouper want to dive into whatever structure they’re set up on. False albacore simply want to strip my spool. Drag start-up inertia is often expressed as a percentage of the drag setting. For example, if your drag’s start-up inertia is 25 percent (rather high), and your drag is set at 10 pounds, you’ll actually need 12.5 pounds of pressure to get the drag going.

I don’t use a scale to set my drag, and I don’t hesitate to adjust my drag pressure several times when fighting a fish. My reasoning is that the appropriate drag setting at the initial hookup when the fish is a fair distance from the landing point, and potentially near structure, is not necessarily the best drag setting when the fish is close to the boat or shore. The problem with a high start-up inertia is that my drag needs to be set lower than I want for a running fish because I have to allow for the extra stress required to get the drag going every time a fish pulls line from the reel. I’ve actually noticed it on my videos with certain reels because the drag clicker gives out bursts of sound as start-up inertia is overcome and the drag slips in an initial spurt before giving up line in a smooth fashion. To say it annoys me is an understatement.

What the Daiwa BG Does Best

Consider the above description of how much thought Daiwa has put into the drag system on this reel that retails for a little over $100. Add to this the smoothness and tough gearing provided at this price point, and although I rarely will use this term, I think it’s fair to say that this reel is a bit underpriced. It’s right up there with other reels that cost at least 40 to 50 percent more.

What the Daiwa BG Does Worst

The BG would benefit from a larger handle knob on the reel. My Daiwa BG is now equipped with a power handle and a 39MM EVA knob from Tackle World. This transforms the reel to another level when fighting a big fish, but significantly increases the total cost of the reel for the consumer. It would cost very little for the manufacturer to equip the reel with a larger knob to start.

A feature I don’t like is that the reel has an anti-reverse switch. When flipped to the appropriate position, this allows a spinning reel to go backward. I personally see no use for this because I believe that the drag system should be used to give line to a fish, or the bail should be flipped to let line out. The vast majority of spinning reels these days have an always-on anti-reverse with no extra gearing required to allow for turning it off. Before this was the case, anti-reverse failures were my number one source of problems with spinning reels.

The reel has a waterproof drag, but otherwise is not waterproof. If you’re looking for a hardcore surf reel or one that will catch a lot of saltwater on the gunwale of a boat, I’d spend a little more for something like a Penn Spinfisher.

The Daiwa BG is an exceptional value. You’ll have a hard time finding a reel of its quality and price point. Although I stressed its relatively low cost throughout this review, its greatest strengths are in its gearing and drag system. If you need a great all-around reel for all but the most extreme applications, you can’t go wrong with a BG.