The Tsunami SaltX is a fully submersible reel at a great price. 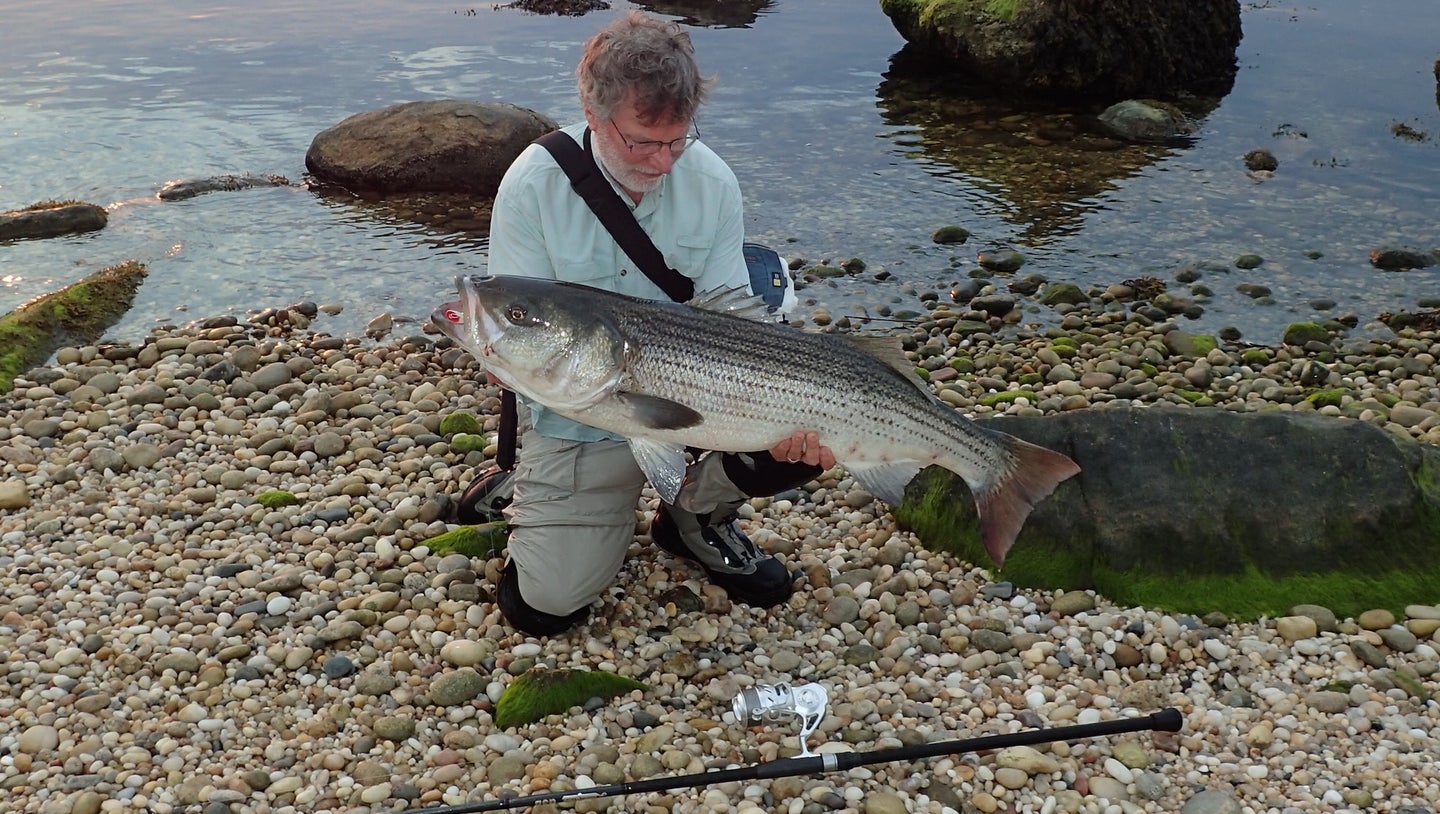 A hefty striper caught from a Long Island beach with the Tsunami SaltX 6000.
SHARE

Solid is the first word that comes to mind when I think of my Tsunami SaltX reels. I was fortunate to get my hands on a SaltX 6000 early in the 2018 season, before they released it in 2019. This means that the Tsunami SaltX reel that I use for most of my surf fishing is one of the oldest in the field. Like most anglers who fish salty shore environments, I’ve had saltwater fishing reels that were spectacular out of the box, only to fail or degrade quickly with use. As I’m now into my fourth season using the SaltX 6000, I can confidently report that the reel is in the same shape as the first time I used it.

How to Choose a Saltwater Spinning Reel

There are a number of features I consider when choosing the best fishing reel for my needs. I do a lot of surf and kayak fishing, so I want fishing reels that can, at least, tolerate occasional brief submersions or washovers by waves. I prefer reels that are entirely waterproof so they don’t start slipping when rained on or splashed. While only a small percentage of reels on the market fall into this category, many are water-resistant enough for most of my applications. The most common failure on my saltwater spinning reels over the years has been stripped gears, so I’m looking for machined gears as opposed to die-cast, and I would prefer stainless steel. It’s important to be aware of gear ratios on fishing reels because high-speed reels are great for some species, but not the best for others. No one wants a heavy reel or one that corrodes if not rinsed after every use, so I’m looking at weight and finish, as well. I’ve found almost all bargain basement reels these days hold enough braided line and can provide sufficient drag pressure for nearly all applications, but I’m still looking at line capacity and max drag.

Tsunami boasts that the 14 strategically-placed internal seals render the reel waterproof and submersible and that you can crank it underwater without risk of water intrusion. I have a bad habit of using my surf rod as a support stick to get on and off rocks, so my reel has been submerged and dunked many times. It has also seen its share of sand-laden waves in the ocean surf. I’m almost embarrassed to admit that I very rarely give this reel a freshwater rinse after use, and have never opened it up or serviced it in any way. Despite my laziness, the reel remains as smooth as the day it came out of the box. I can only assume no water has gotten inside the gearcase because I’ve had this happen to other saltwater reels, which inevitably began binding while cranking. I have never intentionally cranked this reel underwater, although it has certainly happened sporadically in rough surf.

The fact that the reel is as smooth as it was in 2018 is likely due to its stainless steel gear train. We’re talking stainless machined main gear, pinion gear, shaft, and seven sealed stainless ball bearings. All of this is housed in a fully machined aluminum body and rotor. The result is a very solid reel weighing only 18 ounces for the 6000 and 14.6 ounces for the 4000.

I have two SaltX 4000 reels that I have fished since early 2019. One is spooled with 30-pound braid and sits on a relatively inexpensive — but very capable — 7’ Tsunami Classic Spinning rod (TSCS-701H). I use this for tarpon and sharks in Florida backwaters, mostly from a kayak. It has experienced my only SaltX failure so far. On two occasions, with a shark screaming line off the reel, I’ve had the drag clicker spring come off. The only impact this had was that the drag no longer made the ZZZZZZZ sound we all love so much. Big stripers and blues have not caused this to happen on any of my other SaltX reels, but a big shark in 3 feet of water will challenge any 4000 size reel. Other than that aesthetic inconvenience, the reel has performed flawlessly. My other SaltX 4000 is spooled with 20-pound braid and splits its time between an 8’ Lamiglas GSB81MS and an 8’ 6’’ Tsunami SaltX Surf Rod. It’s used mostly for bay and Long Island Sound shore applications, and is as good as new after two seasons.

I believe the desire to fish with bailess reels is a regional preference favored mostly by Northeast surfcasters. I happen to be one of those who thinks no angler would miss bails if they were never invented. That’s why I was excited to see a bailess conversion kit included with the reel. I now own two Tsunami SaltX 4000s and one 6000, and all of those reels have been converted to bailess. Most anglers will likely leave the bail on and find it as solid as the rest of the reel. In either configuration, the titanium-coated line roller is as good as they get. Mine shows no wear and spins freely, despite not being rinsed with freshwater very often. This is an important point because my failure to rinse reels after saltwater use has resulted in line rollers on other reels getting sticky and freezing up. This renders a spinning reel nearly useless because a malfunctioning or frozen line roller results in issues with braided lines that cause wind knots and other problems. Lesser quality rollers can become grooved by the braid, which will quickly result in damaged line.

The SaltX drag system is waterproof and I can vouch for its smoothness. As with the cranking, the drag on my 6000 has seen no degradation after three seasons of use. The max drag on both SaltX sizes is rated at an amazing 50 pounds. I never understood the desire for such high drag ratings until I tried to keep large Florida grouper from diving into reef structure. Although the sealed design and bailess option of these reels initially made me think they were designed for surfcasters, it’s clear from the drag rating, high line capacity, and overbuilt gear train that they are also targeted to a variety of boat-based inshore and offshore fisheries. Both reels provide a lot of stopping and cranking power in a small and lightweight package.

Almost all of the spinning reels I use these days are either Tsunami or Penn. A significant difference between the two is in the gear ratios. A Tsunami SaltX 4000 has a 5.3:1 gear ratio. This means every full rotation of the reel handle will spin the rotor 5.3 times. The Penn Clash II 4000, and most other 4000 size Penn reels, has a 6.2:1 gear ratio. This translates to how many inches of line are retrieved for each full rotation of the reel handle. When comparing the retrieve speed of a SaltX 4000 to a Penn Clash II 4000, which has the same diameter spool, the SaltX is a slightly slower reel.

The only time I find this to be a drawback is when I’m targeting false albacore by skipping tins across the surface of the water. This is a popular fishery in Northeast waters in September and October, and at those times, I’ll choose the faster Penn reels. The difference in inches per turn of line retrieval between the SaltX 4000 and Penn 4000 reels is roughly five inches. Penn also offers some high-speed 4000 reels with a 7.0:1 gear ratio. While faster reels have an advantage for false albacore fishing, I prefer the slower Tsunami reels when winter fishing for snook, redfish, and trout in Florida. Slower presentations usually do best in the relatively cool winter water, and the slower reel is better matched to slower retrieves. Although factors related to gear train construction definitely come into play, it is usually accurate to say that reels with lower gear ratios have more power, similar to how lower gears on a truck are more suited for trailering a boat up an incline.

What the Tsunami SaltX Does Best

These are waterproof and submersible workhorse reels with exceptional drag strengths, and they stand up to abusive elements with no maintenance beyond an occasional freshwater washdown. While the same could be said of some other reels on the market, the SaltX offers these features to anglers on a tighter budget.

What the Tsunami SaltX Does Worst

These reels are not as smooth as some others on the market, but that can be the trade-off of integrating enough seals to make a reel waterproof. My newer 4000’s are noticeably smoother than my heavily-used 3-year-old 6000, but maybe that wouldn’t be the case if I finally opened it up and refreshed its lubrication.

Final Thoughts on the Tsunami SaltX

I was skeptical about the Tsunami SaltX reels when they first hit the market because I would have expected to pay 50 to 100 percent more than what they cost to have completely submersible reels with equivalent features. After three seasons and a lot of great fishing, I have total confidence that the SaltX is one of the best fishing reels at an amazing price. Only time will tell if they have the longevity of competitors’ reels that cost twice as much, but so far, so good.