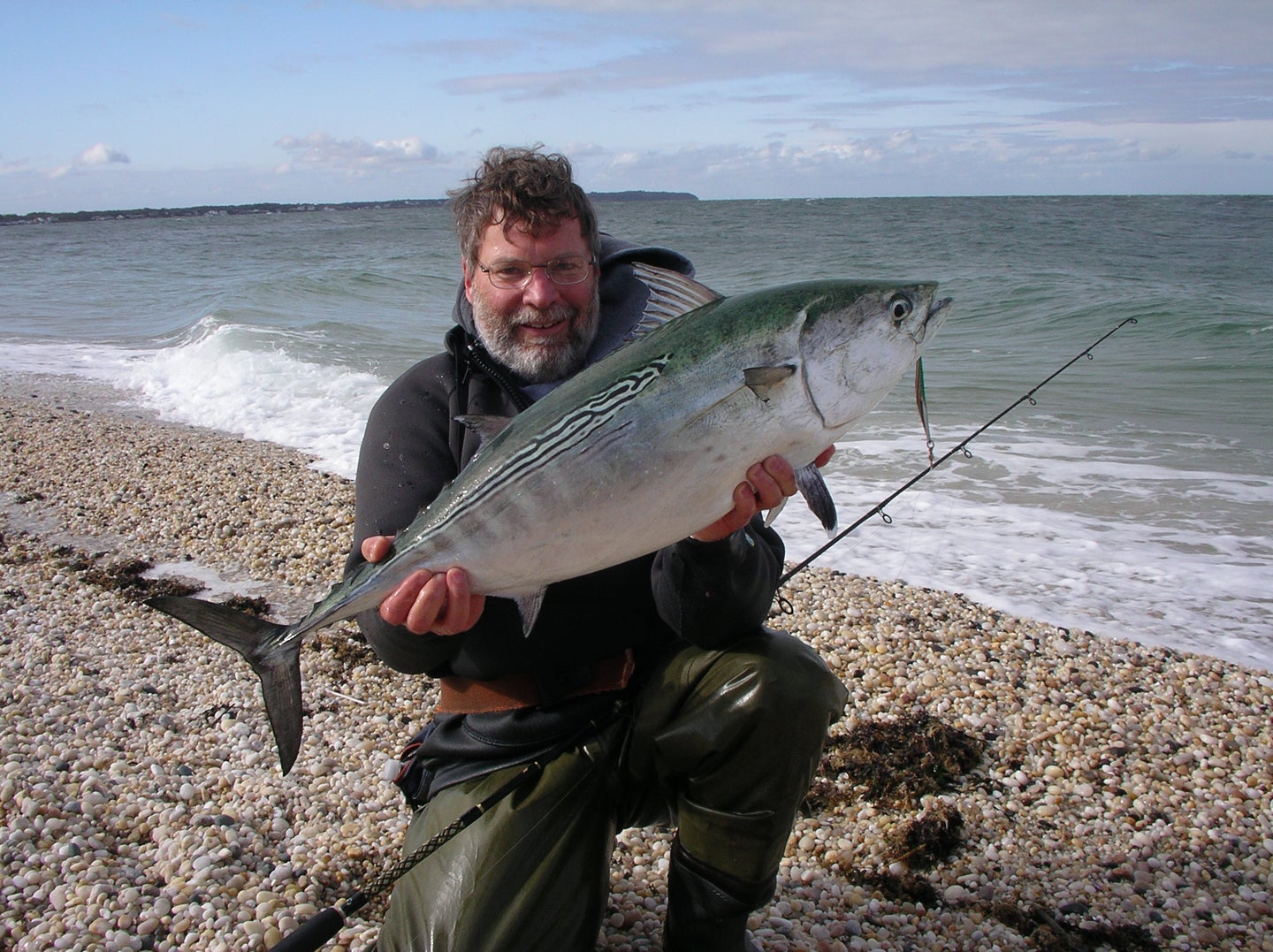 The author with a 16.4-pound false albacore that held the New York State record from 2009 until 2021. John Skinner
SHARE

Imagine a fishery where you throw metal lures as far as possible, and then skip them back to shore as fast as you can. I just described how I, and many others, fish for false albacore. It’s a popular fishery in the Northeast and one that I’m passionate about.  The high number of casts during a typical albie session is interrupted by explosive surface hits and screaming drag that is matched by few other fisheries. The physical demands of making so many casts necessitates lightweight gear that’s still capable of landing fish that frequently strip one hundred-plus feet of line on the hookup. Throw some saltwater on the fishing gear, and it becomes clear that this fishery is tough on even the best fishing reels. These brutal conditions make it the perfect testing ground. For the past six years, my Penn Clash reels have been through the albie gauntlet and remain my top choice.

The demands of albie fishing dictate the important features required for saltwater spinning reels to do the job well. I prefer the 4000 size Clash because it has the power and line capacity to handle the fish while being light enough to cast all day. The standard Penn Clash II 4000 weighs only 10.6 ounces. With eight sealed stainless-steel bearings and a clutch bearing, the reel is as smooth as any I’ve used.

Pound for pound, I’ve never caught an inshore gamefish that can smoke a drag system like a false albacore. The Penn Clash II HT-100 drag system is more than up to the task in this department. High retrieve speed is a requirement for skipping metal lures on the water’s surface. The standard Clash II 4000 has a 6.2:1 gear ratio and pulls 35 inches of line for every full turn of the reel handle. While this does the job nicely, I opt for the high-speed version of the 4000 that has a 7.0:1 gear ratio and pulls 44 inches per turn. This gives my cranking arm some relief, since I don’t need to reel at breakneck speed to keep my lure on the surface.

The combination of an albie’s savage hits and the low-stretch braided line I prefer puts a lot of stress on a reel’s gear train. Several years of experience showed that Penn’s CNC machined gears are mostly up to this task (more on that later).

Line management is where the Penn Clash stands out among all other reels that I have used. This is a function of the reel’s Hydrophobic Line Roller Bearing and its Leveline Slow Oscillation System.

This will buy you a little extra casting distance because the line will come off the spool with less resistance on the cast. But the bigger advantage is a reduction in wind knots. This is huge in albie casting, because of the number of casts and the fact that skipping a tin on the water’s surface generates inconsistent line tension on the retrieve. Add an onshore wind—that is often the most productive for this fishing—and you have the perfect recipe for wind knots that will snap off lures and ruin pricey braided line. My use of slow oscillation reels, the Penn Conflict II is another, has effectively shut down this issue for me.

When I first became aware of the impact oscillation speed had on line management and casting distance, I asked a Penn staffer why weren’t all reels slow oscillating. He explained that the crisscross line wrap of a standard oscillating reel allowed for more pressure to be exerted on the line without the risk of it cutting into the spool. When the line wraps are more parallel, there is more of a chance that a very tight drag could bury the line between the wraps. But I always spool line tightly on a reel. I also fish a tight drag with 20-pound braid for albies, and have never had a problem.

The only drawback that I see with the Penn Clash II is that it’s not waterproof. I would not use it in rough surf where it would be subjected to washovers with sand-laden waves. I would also not use this reel in applications where frequent dunking in saltwater would be likely. That said, my best False Albacore fishing occurs with a 20-knot wind in my face while my gear is splashed occasionally. The Clash handles this fine, and the drag has enough water resistance to keep it functioning perfectly through the shots of saltwater or rain.

I had an older Penn Clash develop a noisy line roller, but this didn’t impact function. I also stripped a gear on a heavily used old Clash. Don’t judge the reel too harshly on this failure, though, as I beached over 500 albies combined in the 2016 and 2017 seasons using the same two Clash reels. That many albies is quite the workout for even the best saltwater spinning reels.

Penn made a nice improvement on the original Clash when introducing the Clash II: The company upgraded the handle to an EVA power knob. Prior to that upgrade, I was replacing Clash handle assemblies with those from Penn Slammer reels. This no doubt put extra stress on those original Clash gears, and may have contributed to my one gear failure. The upgraded knob, smoothness, and lightweight combine to make the Clash II an exceptionally comfortable reel.

What This Fishing Reel Does Best

These reels are the best I’ve ever owned in terms of braided-line friendliness, thanks to the slow oscillation speed. They also have exceptionally smooth drags, and I think the bearing under the spool and the hydrophobic line roller bearing contribute to this smoothness. The reels are also very smooth cranking. The 7.0:1 gear ratio option makes the Penn Clash II, in my opinion, the best spinning reel for high-speed presentations.

What This Fishing Reel Does Worst

This is not a good choice for a reel that will see a lot of saltwater from either surf waves or frequent splashing on the gunwales of a boat. I would describe the reel as “water-resistant” as opposed to “waterproof.” That said, my Penn Clash reels take periodic splashing on choppy days without issue.

This review focused on false albacore fishing, but I’ve also found this Penn reel to be excellent for all light surf fishing and have used it many times for striped bass and summer flounder. If you are plagued by wind knots when fishing braid, I’d suggest trying the Penn Clash II or some other slow-oscillating reel to solve your problem. Overall, I won’t say that this is a great reel for the money—this is a great reel, period. Penn hit a home run with this reel, but they’ll hit a grand slam if they someday come out with a waterproof version.