Gun News of the Week: Credit-Card Sized Pistol Gives Your Wallet More Bang with Your Bucks

Plus: Federal Firearms Preemption Bill Proposed In A New York State Of Mind 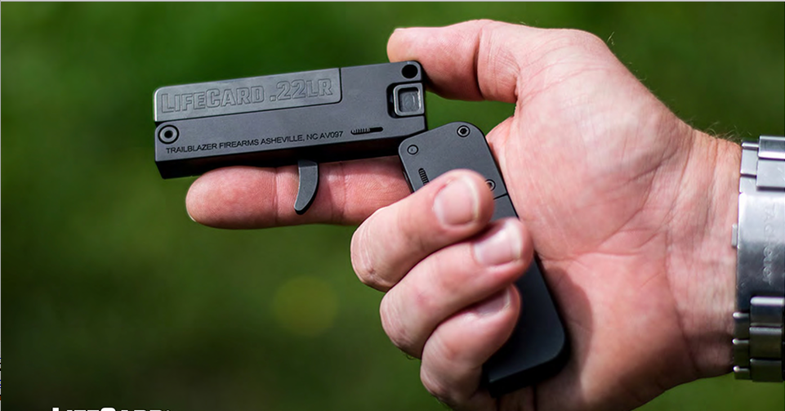 Collins’ pre-emption bill, titled “The Second Amendment Guarantee Act (SAGA),” explicitly limits “the authority of states to regulate conduct, or impose penalties or taxes in relation to rifles or shotguns.”

Adopted in a knee-jerk response to the December 2012 Sandy Hook massacre, the SAFE Act requires firearm registration, an “assault rifles” ban, a high-capacity magazine ban, and an expansion of background checks — none of which, as pointed out by Brietbart’s AWR Hawkins, “would have prevented the attack on Sandy Hook.”

Collins told the AP that SAGA would “protect the Second Amendment rights of New Yorkers that were unjustly taken away by Andrew Cuomo. I am a staunch supporter of the Second Amendment and have fought against all efforts to condemn these rights. I stand with the law-abiding citizens of this state that have been outraged by the SAFE Act and voice my commitment to roll back these regulations.”

— Rod Watson: I stand with Collins on SAFE Act ‘abomination’

This Will Give Your Billfold More Bang With Its Bucks

Its dimensions are 3 1/2 inches-by-2 1/8 inches and a half-inch wide. It weighs 7 ounces. It can fold into wallet billfolds along with credit cards and driver licenses. It’s the LifeCard, a single-action .22 folding pistol introduced in late July by Trailblazer Firearms, a North Carolina-based start-up that promises it will be “the last gun you’ll leave behind.”

LifeCard’s no-snag designed pistol’s frame and grip handle, which can store up to four bullets, is constructed from fully-machined aluminum billet and hard-coat black anodized. The tilt-up barrel, bolt and trigger are made of steel with an Isonite finish for corrosion resistance.

Trailblazer Firearms President Aaron Voigt told Ammoland on Aug. 1 that LifeCard will be available for purchase by late August. It will be distributed by Ellett Brothers and Jerry’s Sport Center.

A former Marine and Army infantryman, Voigt grew up hunting and shooting in the mountains around Asheville, N.C. He’s been developing the LifeCard since 2010. “Initially,’ he told Ammoland, “I had no idea that going from concept to actual product would take seven years, but in essence, that time spent was valuable and will show in every aspect of this remarkable product. I am looking forward to putting this pistol on the market and can’t thank my family and friends enough for all the support and patience.”

Voigt said LifeCard is only the beginning for his newly-founded company. “Trailblazer Firearms fully intends to spearhead innovative new firearms products starting with the LifeCard. New designs and true innovation have been the exception and our goal is to be the pioneer laying new trails for gun enthusiasts, designers and manufacturers,” he said.

— GET FIRED UP WITH THIS FOLDABLE, CREDIT CARD-SIZED HANDGUN THAT FITS IN YOUR WALLET

— New Soft Side Zip Up Pistol Case from STI International

— Maybe The Greatest Innovation in Firearms in 150 Years

— Triggrcon 2017: Innovation in the Firearms Industry

— From obsolete to trendy: The second coming of roller locked firearms

When Seattle City Councilman Tim Burgess convinced the council to adopt its “Gun Violence Tax” in 2015, he predicted it would generate between $300,000 and $500,000 annually to “study the root causes of gun violence in hopes of reducing the costs to taxpayers.”

The tax assesses a $25 tax on every firearm and between 2-and-5 cents for every round of ammunition sold in the city. Since it went into effect on Jan. 1, 2016, however, the tax has only generated about a fifth of Burgess’s projections.

Not that the city of Seattle wanted to disclose these facts. In fact, the city did not want facts to distract the public from the fantasy that the “Gun Violence Tax” is an effective tool in limiting and paying for “gun violence.”

It took a July 28 ruling by King County Superior Court Judge Lori K. Smith to force the city to comply with public record requests that would confirm it has actually spent more defending the tax in court — and all continue to do so — than it has collected in revenue from the “Gun Violence Tax.”

Smith issued her decision in a Public Records Act suit filed by the Second Amendment Foundation (SAF). The gun-rights group filed suit after the city refused to fulfill a public record request from Dave Workman, editor of SAF-owned TheGunMag.com.

SAF Founder Alan Gottlieb called the actual, factual, real-life revenues that the city was forced to reveal “an embarrassing shortfall.”

“It was silly for Seattle to withhold this information,” he continued, “but we’re pretty certain why the city did it.”

Most likely because now the city has to tell its constituents how much money it has spent defending the “Gun Violence Tax” in court. Those figures — which will certainly far eclipse $108,013.04 — weren’t quite handy, as yet, because the meter is still running on that bill.

Now the meter is running on the city to tell its taxpayers how much they’re paying lawyers to defend a tax that isn’t doing what its supporters said it would.

— Florida: How firing a warning shot got a man 20 years in prison

The fait filed their original suit after the adoption of the Cook County Assault Weapons Ordinance in November 2006. They claim the law violates the due process clause of the U.S. Constitution, as applied to the states by the 14th Amendment, because of vagueness in its definition of “assault weapons” which Second Amendment advocates and legal scholars have long claimed to be a politically contrived term that means nothing.

SAF Founder and Executive Vice President Alan M. Gottlieb said refiling the lawsuit is timely because the “recent violent history in the city of Chicago clearly demonstrates that this prohibition has not prevented a single slaying or injurious shooting.”

The suit maintains that under the ordinance, commonly-owned semiautomatic sporting shotguns and rifles could be banned due to the language of the law.

“Laws like this should never be written in the first place,” Gottlieb said in a press release, “and especially they shouldn’t be written by people who do not appear to know anything about firearms.”

— Where Would We Stand Without Heller?