Alaskan DIY Hunter Tags the Ram of a Lifetime 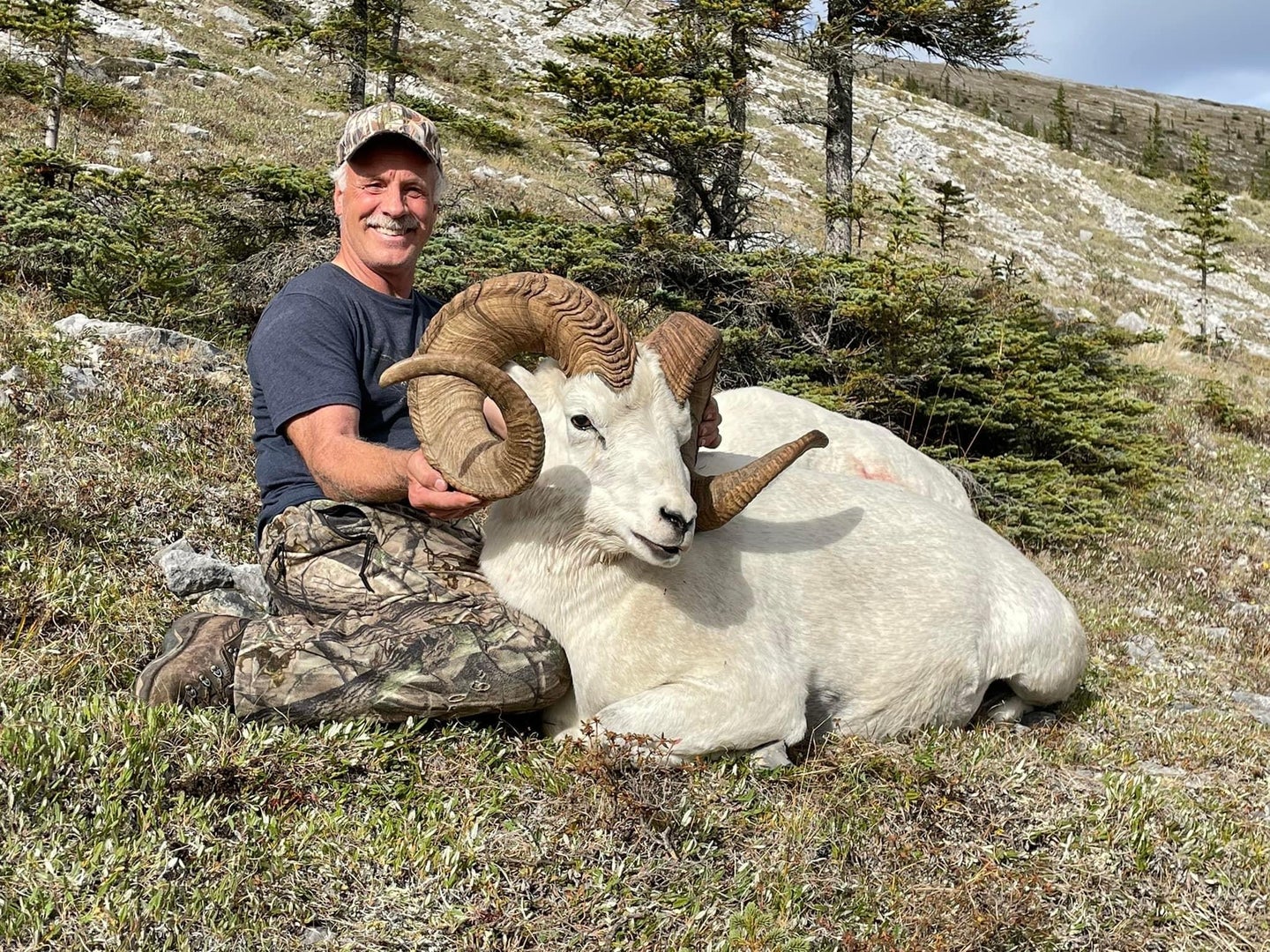 What a ram! I thought enviously, hefting the heavy Dall head that long-time sheep hunter and Fairbanks resident Jerry Lees took here in Alaska this fall. It’s a truly special ram, and in 19 years of hunting sheep myself, I’ve never seen anything close to its equal on the hoof. The ram is 12 years old, and his unbroken right horn measures 46 5/8 inches long. It should easily make the Boone and Crockett record book—an exceptionally difficult benchmark to reach with Dall sheep.

There’s been plenty of doom and gloom around Dall sheep hunting in Alaska lately, and especially this year. Exceptionally harsh winter conditions across the state in 2019, 2020, and 2021 resulted in dramatic winterkill of some sheep populations and generally depressed numbers in many areas. The current attitude of many sheep hunters is less-than-optimistic, and some worry that the future of Dall sheep hunting in Alaska is uncertain. A glimmer of hope (and an indicator that Alaska is still producing big rams) is the handful of monster rams taken this season.

Giant rams like the one Lees took are rare, and it’s not easy for them to grow to that size. It takes not only good genetics, but also the right environmental circumstances for a giant Dall ram to reach his true potential.

“It’s not just genetics or good feed that’s important, but good feed and growing conditions in years two through five that are critical—when a ram is really putting on length,” says Lees, who has been hunting, observing, and watching Dall sheep grow for 43 years. To become a super ram, he explains, a ram must possess the right genetics, dodge predators, experience good winter conditions at the right times, and avoid the watchful eyes of hunters.

After decades of targeting exceptionally big sheep, Lees has developed a rubric of self-regulation when it comes to killing certain rams and letting others reach their full potential.

“I’m only interested in killing rams that are at least 10 years old and over 40 inches in length, or genetically inferior,” says Lees.

This is because once a ram has reached 10 years of age, his horn growth has essentially stopped, and he’s had enough time to spread his genes. Natural mortality greatly increases after rams reach 8 years of age, and once they’re 10, they are near the end of their life expectancy.

If there’s a lesson to be learned from this ram, according to Lees, it’s that persistence pays off. Eventually.

“If you’re persistent and keep getting out there, eventually something really good will happen. You also must be prepared to take advantage of an opportunity like that too,” Lees tells me.

Lees has taken a number of rams that would make most sheep hunters weak in the knees. Looking back on all those, however, he says that this is not only his longest-horned ram, but the only true giant that he had never seen before his hunt. Lees and his hunting partner found his ram with another one—both 12 years old—and were able to capitalize on both rams. The other ram is equally impressive in its own way, with broken horns that carry exceptional mass.

“I haven’t been that excited about a sheep in a lot of years,” Lees tells me.

I’ve never come across a ram like his, but I can vouch for the fact that persistence pays off in many hunting situations. On more than one occasion, when almost all time and hope had run out, opportunity appeared in an instant because I kept going and kept looking. It doesn’t always work out—it rarely does—but that’s why it’s called persistence. Eventually it will.

A Glimmer of Hope

Sheep hunting in Alaska is going to be harder for a while, and it’s easy to get discouraged. Some areas of the state get hammered by commercial operators and outfitters, and a string of bad winters has taken its toll on certain herds. On top of all this, millions of acres of publicly accessible sheep country have been eroded since the 1980’s, and we continue to lose ground. There is plenty for a sheep hunter to fret about.

Read Next: The Best Hunters Go on Instinct. Here’s How to Sharpen Yours

However, it’s a sliver of light to see that despite all the negative focal points, there are still monster rams out there that no one knows about. Giant rams don’t often stay secrets for long once someone spots them, and a hint that there was a whopper seen in this mountain range or that drainage often brings an avgas-fueled wave of sheep hunters looking for them with an un-matched hysteria.

Personally, I find some hope in knowing that there are spectacular and exceptionally special rams still out there. I know that If I keep going, someday I might just peek over a ridgeline and see one of them myself.