With a 16-inch barrel and detachable AICS-style magazine, the new Ridgeline Scout is an incredibly handy and accurate scout rifle 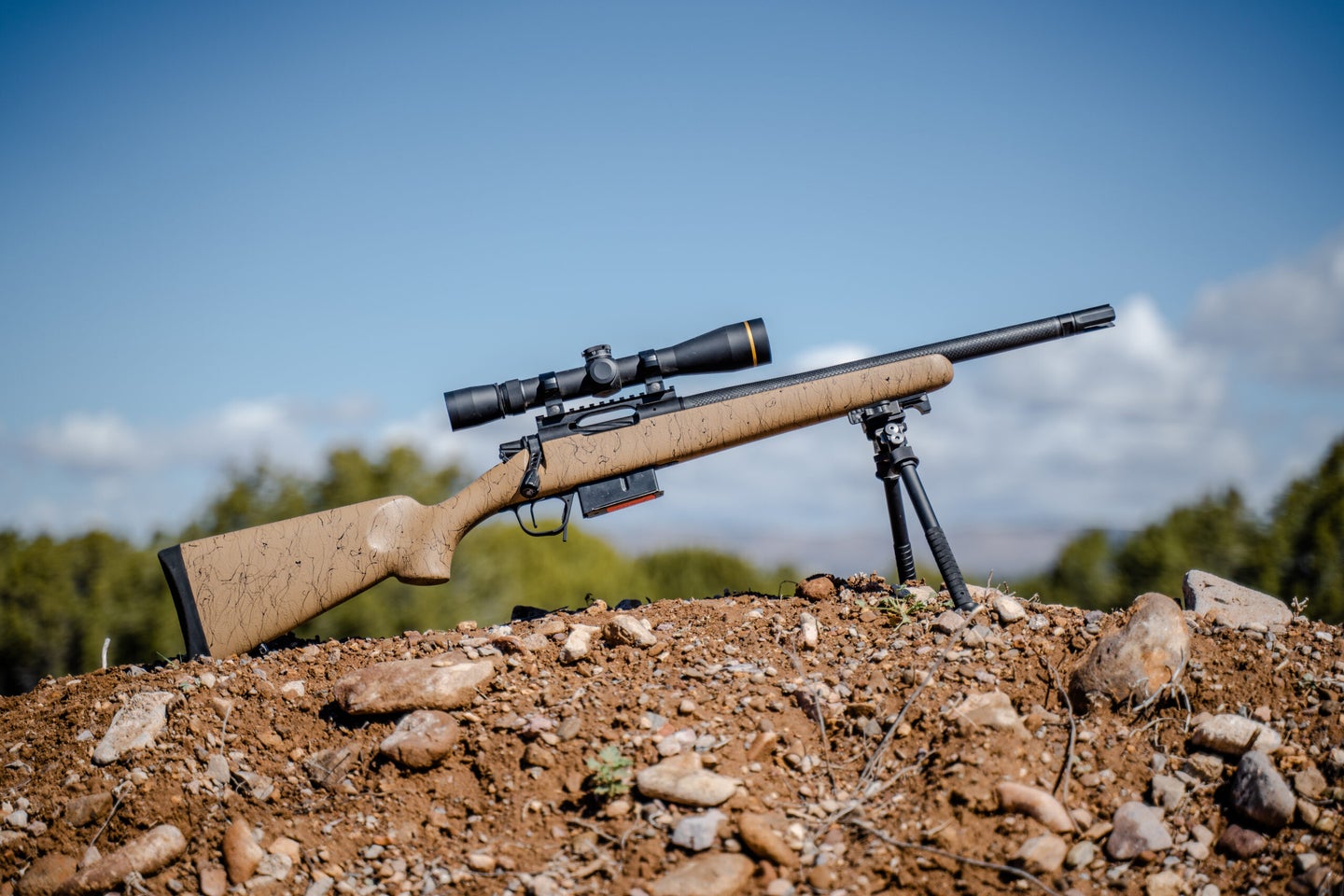 If there was ever a place to test the Christensen Arms Ridgeline Scout, it would be at Gunsite Academy, which is the birthplace of the modern scout rifle. Gunsite was kind enough to host the Outdoor Life 2022 gun test where we put the Ridgeline Scout through intensive accuracy testing at 100 yards, plus plenty of dynamic handling and shooting.

The Ridgeline Scout initially grabbed my attention by being short, handy, and lightweight. It’s a good-looking rifle that takes the design of the Christensen Arms Ridgeline series and adapts it to more of a scout-rifle profile with a shorter barrel, detachable AICS magazine, and a slightly tactical feel. The Ridgeline Scout is offered in five chamberings, all with 16-inch barrels: .223 Rem, .300 Blackout, 6mm ARC, 6.5 Creedmoor, and .308 Win.

Nothing comes for free when it comes to rifle performance, and reductions in weight and size often require a sacrifice in performance or handling. Lighter rifles are more difficult to shoot precisely and accurately, and sometimes a rifle’s utility can be lost in chasing sentimental concepts. The Christensen Arms Ridgeline Scout comes with a sub-MOA accuracy guarantee, so I expected to shoot it well, but I wasn’t sure how the balance of usefulness and scout rifle novelty would settle out.

Features and Function of the Christensen Arms Ridgeline Scout

To evaluate the Christensen Arms Ridgeline Scout as a scout rifle, we have to understand what a scout rifle is and what it’s intended to do. Shooting Editor John B. Snow wrote the following great description of what a scout rifle is intended to be in an article when Ruger introduced their Gunsite Scout Rifle in .223 Rem in 2014. Here, Snow references Jeff Cooper’s (who established Gunsite) founding of the platform: “A Scout rifle, properly speaking, is a general-purpose rifle that can be used for survival, hunting and personal protection. It was to be a nimble magazine-fed bolt gun that could be carried all day and called upon to haul the shooter’s bacon from the proverbial fire when the need arose.

To give some meaning to this broad mandate, Cooper and his cohorts created a list of specific criteria that a Scout rifle needed to abide by. It was supposed to be less than one meter in length, weigh less than 3 kilograms, and have functional iron sights capable of hitting a man-sized target at 450 meters. The rifle was also to have a useful shooting sling (not a carrying strap) and could be topped with an optical sight, but one that offered no more than 4X magnification.”

The Ridgeline Scout doesn’t meet all of Cooper’s mandates (no iron sights, obviously) but it is a nimble little rifle, and you’ll notice how light it is immediately. Although it might not conform to the original scout rifle stipulations to the letter, I believe it captures the concepts and might even bring an improvement in versatility. There are some incredibly light rifles on the market (most of which are longer-barreled and designed specifically for mountain hunting) but a sub 6-pound gun isn’t really the norm for scout-style rifles with bull-profile barrels.

The 16-inch carbon-wrapped barrel is short and stout. Certainly, one would give up some velocity in a shorter barrel like that, but for many standard applications, it likely wouldn’t be a detriment in practical field applications. The included 3-prong-style flash suppressor gives a nod to the scout rifle ancestors but it’s a bit impractical for most users. The rifle begs to be suppressed, and even if used for hunting without a can, I’d certainly want a flush thread protector that would be easier to tape over when using in the field. The rifle could be used in NRL hunter, where a brake would be appropriate.

The sporter-style stock is sleek and handsome. It’s carbon-fiber and bedded with steel pillars and additional spot bedding as well. Steel pillars add a little bit of weight, but they are less susceptible to thermal expansion and contraction changes than aluminum. For a lightweight rifle that’s intended to be driven hard in a wide variety of conditions, it’s a smart choice.

The stock features a thin, comfortable grip, a section of rail with a barricade stop on the fore-end, and a black-on-tan Bell and Carlson-looking dappled web paint job. The stock finish is relatively smooth but with enough fine texture to provide a great grip. There was a bit of unevenness in the fit of the stock around the trigger guard and magazine well, but overall, it was fit well and certainly within acceptable standards for a rifle of that price.

The machined action on the Ridgeline Scout is coated in a black nitride finish and is very smooth to operate with the AICS magazines. The bolt handle is skeletonized to reduce some weight, and a slightly over-sized bold knob aids with rapid cycling and confident operation. Although some traditional scout rifles are set up to mount a scope forward of the receiver, the Ridgeline Scout features a zero-M.O.A. rail mounted to the action.

The Ridgeline Scout in Action

The Ridgeline Scout proved to be very accurate—especially for a rifle of its size and weight—but it really shined in dynamic handling and shooting. It was easy to carry and quick-cycling, and the slim stock was easy to shoulder quickly.

The thin, traditional American-style grip is comfortable and functional, but the combination of that design and a flat trigger shoe didn’t mesh well. The rifle has a great trigger function, but the flat trigger shoe with the more traditional-style grip makes it more difficult to apply an even, smooth pressure. We found that it contacts just the bottom edge of the pad of the trigger finger. Flat triggers are popular, and they work well with a more vertical grip, but a curved trigger shoe probably would be a better fit for this rifle.

Being at Gunsite Academy, part of our dynamic testing protocol was to run the rifle through the famous “Scrambler” course. The Scrambler is a simple but challenging run-and-gun course-of-fire with a steel silhouette target at each of seven stations. You get into position, shoot the target, then quickly move to the next station. It’s a course built for scout rifles, and the Christensen Ridgeline Scout was my favorite rifle to run it with.

It’s nice to have a 10-round magazine sometimes, but it’s not always ideal for hunting scenarios. It can still be important to reload quickly sometimes when using smaller magazines. I found that when using 5-round AICS magazines, the rifle topped off easily. I could just drop a single round in the open receiver and slam the bolt home. Many bolt-action rifles are designed in such a way that a loose round dropped into the receiver won’t feed, and you must fully seat the round into the magazine before the bolt will push it into the chamber. That wasn’t the case with our Christensen.

Read Next: Taurus G3X Review: A Great Pistol for a Great Price

What the Christensen Arms Ridgeline Scout Does Well

The Ridgeline Scout is an accurate and highly versatile rifle that would be perfectly suitable for a lot of situations and applications. Its size, weight, and suppressor-readiness make it an attractive rifle for just about anyone.

The only things that really don’t make sense on the Ridgeline Scout are the three-prong flash suppressor and the trigger. The flash suppressor looks cool, but I’d rather see a brake or thread protector—and I don’t care for brakes. The trigger would be better suited as a curved shoe rather than straight. It’s a good trigger, but the grip angle and flat-trigger shoe combo doesn’t do the shooters any favors.

At the end of the gun test, the Ridgeline Scout was one of the rifles I was most excited by. It shot great and handled even better. I’d hunt just about anything with it and my mind was racing through all the scenarios that I’d love to use this rifle for: blacktail deer on Kodiak Island, black bears, hogs, Dall sheep, coyotes—hell, probably even an African plains game safari. For the hunter or shooter who wants to invest in a quality rifle that will fill a variety of roles, this one is tough to beat.