Big Green’s re-entry into the ammunition market promises to make its flagship load more accurate and deadly. Here’s how the new Remington Core-Lokt Tipped performed on the range 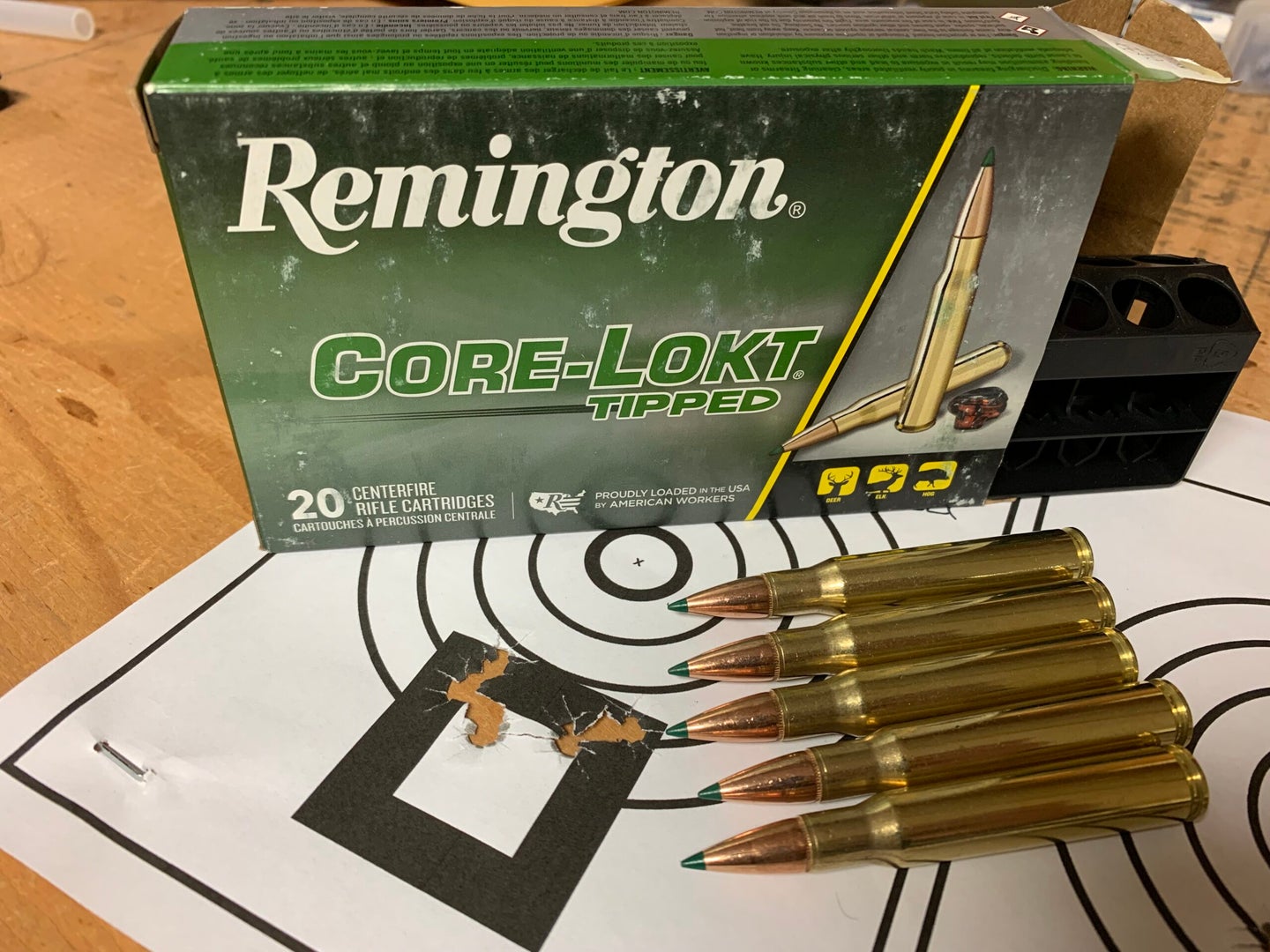 Amid continuing ammo shortages, Remington Ammunition is under new ownership and rolling out ammo right now. After the numerous woes the Remington brand has suffered in recent years, the return of Big Green’s ammunition is good news for all hunters and shooters.

A fresh start for Remington ammo brings promise with its new Core-Lokt Tipped bullet, which began rolling out in August 2021. Although Remington certainly isn’t ditching the traditional Core-Lokt, this updated load features a polymer tip, better ballistic coefficient, and a better mechanically locked jacket and core. It’s designed to increase accuracy with a more rearward center of gravity. Along with better ballistic performance, the polymer tip acts to initiate rapid expansion. The “lock” which isn’t a molecular bonding, but basically a mechanical connection keeps the core and jacket from separating, resulting in an expanded, but high-weight-retained mushroom. That’s just what hunters want.

History of the Remington Core-Lokt

There’s probably not a single, more well-known hunting ammunition load than Remington Core-Lokt, and it has been putting game on the table for hunters for decades. In fact, it’s probably the most popular deer hunting ammunition in history. The iconic load featured a pointed lead soft-point bullet with the jacket mechanically “locked” onto the core. It was a bullet ahead of its time when it was introduced in 1939, and it provided rapid expansion with good weight retention which resulted in its great success and popularity. In fact, I shot my first moose with Core-Lokt 220-grain ammunition, out of my first rifle, a Remington Model 710 in .30-06.

Unfortunately, quality control issues in the past did significant damage to the reputation of Core-Lokt ammunition. Although Core-Lokt always maintained a loyal following, stories of primers and bullets falling out of cartridges fresh off the shelf did the brand no favors. I never experienced any of that first-hand, but I quit buying it more than a decade ago after experiencing accuracy issues. I just couldn’t get the stuff to shoot, even in rifles that used to like it. Turning out 4-inch groups at 100 yards just wasn’t going to cut it. For years, I looked at it as junk ammo.

I was eager to get ahold of this ammo and got several boxes of .30-06 with 180 grain bullets, a cartridge and weight that’s suitable for just about any game in North America. My biggest questions revolved around the accuracy, consistency, and quality control of the ammo. A fresh start with good QC would be a huge revitalization for the brand, and ammunition that’s more consistently accurate would put it right back on my list.

I carefully examined the ammunition, looking at each cartridge. I noted the typical factory crimp on the case, and the only obvious inconsistency I could find was a variation in patina on some of the primers. Some of them were shiny brass, and some were darker, but aside from an aesthetic inconsistency, it didn’t cause me any concern. Through a box of these factory loads, I measured overall cartridge length to get a feel of the consistency of seating depths. The maximum variation was .011 inches with a standard deviation of .003 inches. I compared this to some of my own handloaded ammunition, as well as a box of premium factory ammo, both of which were also polymer-tipped bullets. My handload OAL’s varied by a standard deviation of .002 inches with a maximum variance of .006 inches. The other premium factory ammo had a standard deviation of .001” with a standard deviation of .003 inches. Overall, that’s pretty good consistency for factory hunting ammo, and I couldn’t find any defects or outliers in the cartridges as they came packaged.

In the year that I’ve been shooting Remington Core-Lokt Tipped ammo, I haven’t shot a lot of critters with it, but with a small sample size, I’ve liked what I’ve seen. I killed a caribou last winter with the .30/06 load, and it passed through from a 250-yard shot. It was uneventful, and uneventful is good. This fall, a buddy and his son took two nice bull caribou with the 130-grain .270 Core-Lokt Tipped load, which was also uneventful. Both of their 130-grain bullets passed through and were not recovered. It’s a bullet that seems to have great terminal performance and good penetration.

Looks are one thing, but how well would the new Core-Lokt Tipped shoot? Seeing as it’s an all-around load for an all-around cartridge, and for nostalgia’s sake, I wanted to see how accurately it would shoot in the first rifle I ever bought, that old Remington model 710. To be clear, the 710 is anything but a sleek, high-performance rifle. This one always shot well, however, and I used it to take a lot of game, including several moose, sheep, caribou, and bears. I used to shoot Core-Lokt ammunition in it and being able to use it once again with confidence would bring things full-circle. Through this rifle, I shot eight 5-shot groups, which averaged 1.48 inches. Many shooters might scoff at anything over an inch. But for shooting 5-shot groups with hunting ammunition, through that old rifle, is pretty damn good. My smallest group was 0.83 inches and my largest group was 1.88 inches.

For another reference point, I shot five 5-shot groups through a Winchester Model 70 that I know handles a variety of loads well. Of those groups, the Core-Lokt Tipped averaged a 1.39-inch group. Through that rifle, my smallest group was 0.96 inches and the largest was 1.49 inches.

Velocity was also pleasingly consistent for the grade of ammunition. The 180-grain load I used advertises 2,745 feet per second at the muzzle (likely out of a 24-inch barrel). Out of the 22-inch barrel of my Model 710, it averaged 2,528 fps with a maximum spread of 67 fps and standard deviation of 19.3 fps.

After initial testing of the Core-Lokt Tipped ammo in .30/06, I had the opportunity to shoot the 150-grain Core-Lokt Tipped load in .308 Win. through a variety of rifles, and the 130-grain bullet in .270 Win. in a Weatherby Mark V Hunter. Across the three calibers, the Core-Lokt Tipped is proving to be one of the most consistently accurate factory hunting loads I’ve tested this year.

I tested the 150-grain .308 Core-Lokt Tipped load in six different .308 rifles, along with 9 other types of factory .308 hunting ammo. Core-Lokt wasn’t always the best-shooting load for each rifle, but overall, it had the most consistent accuracy of any ammo tested. The average size of 29 five-shot groups through six rifles was 1.54 inches. The two rifles with the best averages with the Core-Lokt Tipped ammo were the Tikka T3X Lite (1.25 inches) and the Christensen Arms Ridgeline Titanium (1.22 inches). These were five-shot groups, and three shot groups satisfied factory three-shot MOA accuracy guarantees in all rifles that had them.

The Core-Lokt Tipped ammo proved to have consistently good accuracy in the 130-grain .270 Win. load as well—a cartridge that’s not known for outstanding factory ammo accuracy. Core-Lokt Tipped was one of six different factory hunting loads I tested in a Weatherby Mark V Hunter, and it was the second most accurate load in that rifle. The raw average for all 12 groups recorded with the Core-Lokt Tipped was 1.53 inches, just behind the most accurate ammo in that rifle which averaged 1.46 inches for its five-shot groups. With this rifle, the first three shots printed under an inch about 75 percent of the time.

Where Core-Lokt Tipped Is Lacking

Although I don’t have any complaints with this new line’s practical quality and performance, I would like to see a little more attention to detail in the coloration of the primers. Are we desperate for primers and components? Yes. Does a slight variation in the patina of primers in a box of ammo make any difference? Probably not. But there are scores of hunters out there who will be looking at this launch with a keen, skeptical eye, and a certain percentage of them will shy away from a perfectly good, consistent product because of inconsistent appearances.

What Core-Lokt Tipped Does Well

This new rollout seems to be much more consistent in accuracy, velocity, and quality control than some of what you used to find on the shelf. It brings better-shooting bullets that will still give the terminal results (if not better) that sold Core-Lokt fans on it in the first place.

The sample size that I was able to test indicated that the Core-Lokt Tipped will be a great all-around load. It’s made with the deer hunter in mind, but perfectly adequate for a wide variety of game. No decent ammo is cheap these days, but this load should fall in the middle of the road on price, and bring better consistency, accuracy, and modern bullet performance for the money. In a time where options are scarce, it’s a welcome sight, and an exciting new start for Remington.