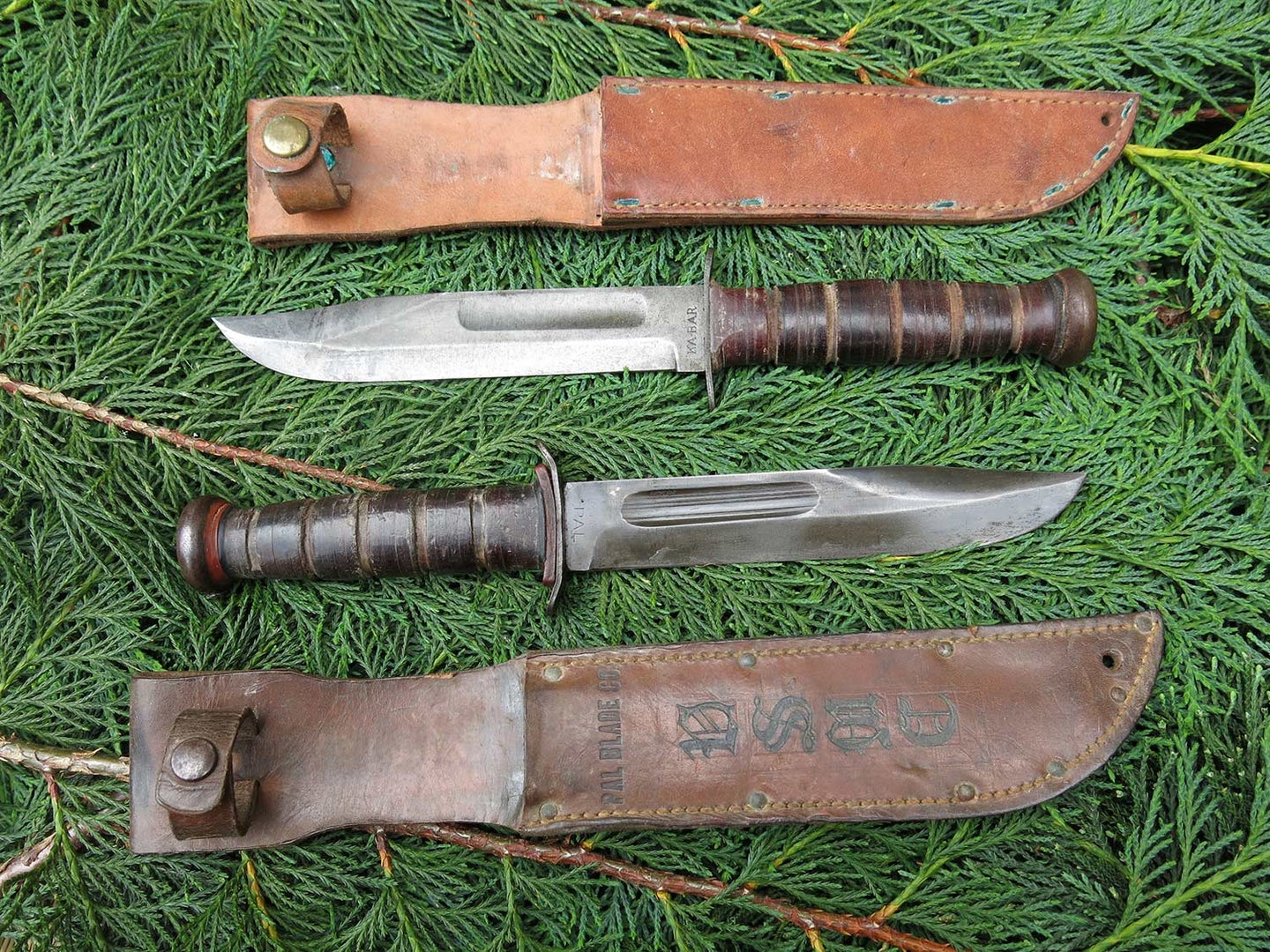 Strange as it may seem, the U.S. Marine Corps entered the jungle campaigns of World War II without a decent combat knife. Their first attempt was a double-edge dagger based on the British Commando knife, but it quickly proved to be a very poor utility blade for infantry combat. Going back to the drawing board and working with Union and Camillus cutlery companies, they came up with an all-purpose sheath knife, the USMC Knife/Fighting-Utility Model 1219C2. Camillus is said to have made the first deliveries to the Marines on January 27, 1943. Maybe “Knife/Fighting-Utility 1219C2” was just too big of a mouthful, and Camillus just didn’t have much of a ring to it. In any case, Leathernecks quickly unofficially labeled all knives of this pattern “kabars” after the trademark stamp of Union cutlery. (From this point on in the article “KA-BAR” is a cutlery company, “kabar” is a generic knife pattern.) A legend was born that continues to this day!

The basic design of the new combat knife was a blade (1095 carbon steel) 7-inches long by .18-inch thick, with a fully sharpened 2.25-inch false edge and Bowie point. The generously sized handle was made of stacked leather washers later treated to prevent rot under wet conditions. On the end of the handle was a flat, steel pommel well suited to light pounding chores. Even better, from an overloaded infantryman’s perspective, was the fact the knife only weighed 14.5 ounces in the leather sheath. (The Navy also adopted the knife as the Mark-II and later added a plastic sheath to make it a better dive knife during UDT operations.) The knife soon proved itself to be a great all-purpose tool for living and fighting on one Pacific island after another. And by the end of the war, practically every civilian back home had seen photos of Marines carrying the kabar through fiery hells, including the legendary flag raising on Iwo Jima. Of course, many Marines brought their kabars home with them after the war. As a kid, I can remember hearing the knife commonly being praised by combat vets as their favorite hunting blade.

When the Vietnam War started, the military made the wise decision to make the kabar pattern knife a service-wide standard issue item. The “USMC” and “USN” stamps were dropped and the knives were simply marked “US” with the maker’s name below. Camillus Cutlery Company produced the vast majority of the knives during this period of time. Outside of the Marines, the demand for the knives always exceeded the supply reaching the real troops on the ground. In my own Ranger Company about the only teams equipped with kabars were those that had spent time cross-training with Marine Recon units. The limited number of the Camillus knives that did reach our own supply system always seemed to end up in the hands of officers and senior NCOs. Special Forces teams did manage to find better quantities than we did, and the knife was available on the civilian market if you were willing to take the time to mail-order one. Still, this was the one model knife that most ordinary ground pounders wanted, but had a hard time obtaining throughout the long war.

While I admit I never carried a kabar during my tour in Vietnam, as soon as I returned stateside to the 82nd Airborne Division at Fort Bragg I bought one from the Smoke Bomb Hill gift and book shop. If I remember correctly, the price was around $5. Strapped to the side of my boot, that knife made many a jump over the next 18 months with the 505th Parachute Infantry. I even cleaned a large catch of bluegills and yellow perch (plus one unlucky copperhead snake) I caught while on a survival training project with the knife. So much for those who say the knife is too large for ordinary field chores.

The end of the Vietnam War was also the approximate beginning of the survival/prepper movement in the U.S. A heck of a lot of those early survivalists were military vets and or the sons and daughters of them. It was only natural that a kabar became a standard part of many of their emergency gear packages.

I live in the Pacific Northwest where we are perpetually waiting for “the BIG one”—the 9-plus earthquake this area experiences every 300 years or so. Some say we are overdue right now. When it happens, virtually every bridge in the state will fail, which means don’t expect to be going anywhere or seeing any kind of emergency services show up for some time. I have long planned around my home not coming through the quake in one piece, making access to any stored supplies an iffy thing. On the other hand, my two pickups should be relatively undamaged even if there is no place to drive them. With that in mind, I keep spare clothing and a few basic survival supplies in both rigs. Among those tools, under the seats of both pickups, are kabar knives.

There are a number of reasons why I have chosen these knives for this potentially life and death role. First, they are relatively inexpensive so I have no problem caching more than one where they might be most needed. As a design, they are time-proven as a basic utility tool. Although there are many so-called survival knives on the market that boast of indestructibility, most cut very poorly under everyday conditions due to their thick ground edges. The kabar pattern may lack some of that over-built strength but they will whittle wood, slice meat, and dice vegetables very adequately when called upon. It’s not something I would really like to contemplate, but back me in a corner, and I know those kabars will serve me well in a fight just as they have several generations of Americans before me.

Many modern cutlery companies have based their new models on the basic kabar theme. You can have serrated edges, sawbacks, synthetic handles, nylon sheaths, or even tanto points. I have tried one of the sawback models, but I can’t recommend it for much besides fish scaling. Sticking to the original pattern, you basically have two choices, the Ontario Knife Company Model 498 and the KA-BAR USMC. To complicate this a little, the Ontario is the actual current Mil-Spec USMC issue version, while the KA-BAR model is more of a well-finished replica. Ontario’s knife is a bit less expensive, but KA-BAR’s is generally considered prettier. Until recently the KA-BAR version carried the WW-II “USMC” tang stamp, something that kind of rubbed those from other branches of the service the wrong way. This year KA-BAR started offering the knife with a plain, one-sided tang stamp and no marking on the sheath. One other difference between the two knives is the fact KA-BAR does not sharpen the false edge. I believe this is to comply with various double-edge knife restrictions.

The Marines wanted a do-it-all combat survival knife, and the kabar is what they chose—76 years of use in and out of the military, on battlefields and wilderness hikes around the world has proven they made an excellent choice. You might say the kabar is the edged weapon version of the legendary 1911 .45 auto. It just keeps doing the job it was created for without any fanfare.