How to Hang Treestands to Target Mature Bucks 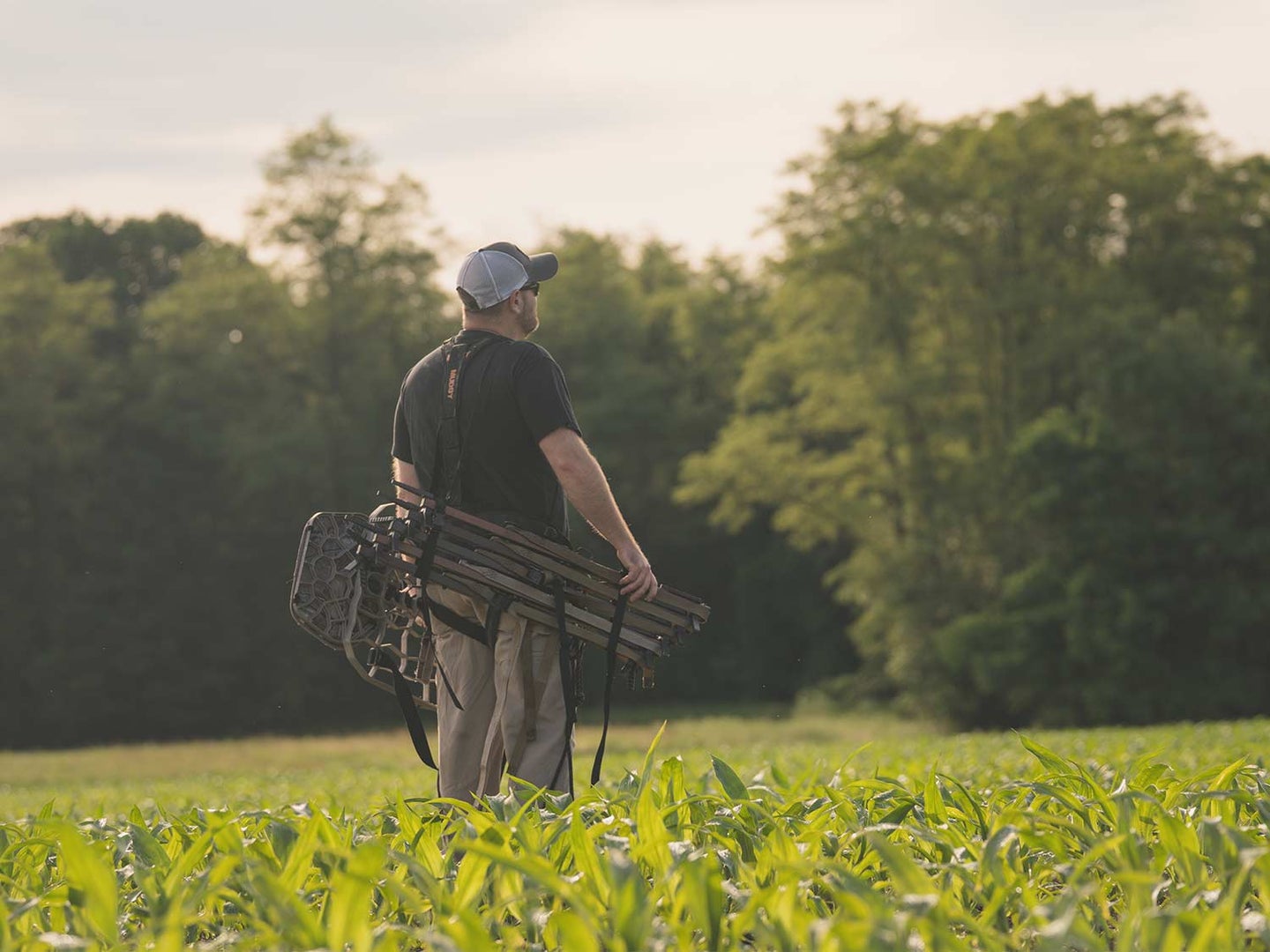 Editor’s Note: This is part 6 of a 9-part Respect the Game series on habitat improvement, whitetail management, and the tradition of deer hunting. We’ve partnered with Polaris to tell the story of the world-record buck, and the group of buddies who worked together to hunt the deer last fall. Stay tuned for more tips, stories, and videos from this series.

Maybe I’m on my own here, but hanging treestands is one of my favorite parts of hunting. Every new stand location is full of promise and unknown adventure.

I have no idea how many stands I’ve hung during my hunting career, but I do know it’s likely more than average given how many years I spent hanging double-stand setups for video purposes. This experience has also taught me a thing or two about maximizing concealment in a tree, and how to set stands efficiently. And because I personally choose to target only mature bucks, I’ve also developed a few tricks for stand sites specifically for hunting the big boys.

So here are a few of my go-to tactics for a stand site that’ll keep you hidden, save you time, and—most importantly—will keep you safe.

I made a lot of mistakes when I first started targeting mature bucks with my stand setups. I still make mistakes sometimes, but I’ve eliminated the most egregious errors. My biggest mistake was failing to make cover my top priority when choosing a stand site, especially in areas where bucks are heavily hunted.

I’d find a great area and choose a tree because it would offer the best shot opportunity, or because it was in the best location, even if that tree was arrow-straight and limbless for 50 feet. These “telephone pole” setups rarely, if ever, worked well. It was simply too easy for the buck to spot me from the ground, and any inch of movement was much too obvious.

Now, I’ll sacrifice the “perfect” spot for a “good enough” location if the tree available there provides superior cover. Trees without lower limbs are no good unless they are located very near other trees whose limbs can help break up your outline. I much prefer to hunt from oaks over any other tree species, save for maybe conifers. Oaks almost always feature multiple limbs, and they tend to hold their leaves much longer into fall than other big deciduous species. In short, they’re simply ideal for hiding hunters and treestands.

Another lesson that relates to cover: Keep the tree between you and the deer. I hunt a lot of public land and thus run into a lot of treestands in the woods. I can generally tell the experience level of the hunter based on how the stand is positioned. Less-experienced hunters place their stands facing the direction deer are coming from. More experienced hunters have their stands placed so that the tree is between them and the deer.

This is one of the biggest advantages of a saddle setup because it’s very easy to hide behind the tree in a saddle and move for a shot. With a treestand, you simply have to plan ahead. I like to angle my stands so that my left side (I’m a right-handed shooter) is about three quarters of the way around the tree from the travel path I expect deer to take. This makes it easy for me to stand, pivot a quarter turn, and take a strong-side shot as the deer passes by while quartering-away. If the deer is walking toward me, I simply pivot all the way around when the deer passes behind the tree, and take the quartering-away shot on my off side.

The tree-saddle movement has brought fresh attention to one of the most critical pieces of hunting gear I own—a lineman’s belt. The lineman’s belt is nothing more than a length of rope that wraps around the tree and attaches to your safety harness or saddle. These belts are standard issue for anyone who works in the timber or arborist fields, and for good reason. They add a level of safety to working off the ground that’s hard to beat.

The most dangerous aspect of hanging a tree stand occurs once the climbing sticks or ladder is in place, and it’s time to actually attach the stand to the tree. If you don’t use a lineman’s belt, this means you will be trying to hang the stand while leaning against the tree or balancing on the climbing sticks. That’s just a recipe for disaster. With a lineman’s belt, you simply lean back from the tree and are safely held by the belt. Both hands are now free to hang the stand.

This last tip is one I’ve started using over the past five years, even on public land, and it’s saved me a bunch of time and effort. It’s also made my time in the woods more efficient and effective because, I’m able to hunt a prime location more often without waiting for a specific wind direction. This works best in open country where edge habitat and cover are somewhat limited. But, with a little thought and planning, it can be employed anywhere.

Using a UTV, where legal, is a big-time help and I’ll use one every chance I get when hanging stands. It’s especially useful here because you’ll be hanging two setups in one area (so you’ll have twice as much gear to haul into the field).

The goal is to cover a hot area with two stands, for two different wind directions. You won’t be able to hunt the spot in every possible wind, but by hanging a pair of stands in the same vicinity, you can give yourself options. Mature bucks don’t simply walk straight into the wind, in my experience. Instead, they prefer to travel in a way that allows them to scent-check areas of interest. This is especially true during the rut. And this is where the dual-stand situation really shines.

Find an area where you think does are bedding. Then locate a transition area or habitat edge. That’s where bucks will likely cruise as they scent-check the bedding area. Hang one stand for a west wind. Then hang another in the same area for an east wind. Think about how a buck would check the area based on the wind direction, and plan your stand sites accordingly. By using two setups in the same area of cover, you can hunt that location more often and with less risk of the buck catching your scent.