Use backwaters and a boat for a stealthy approach 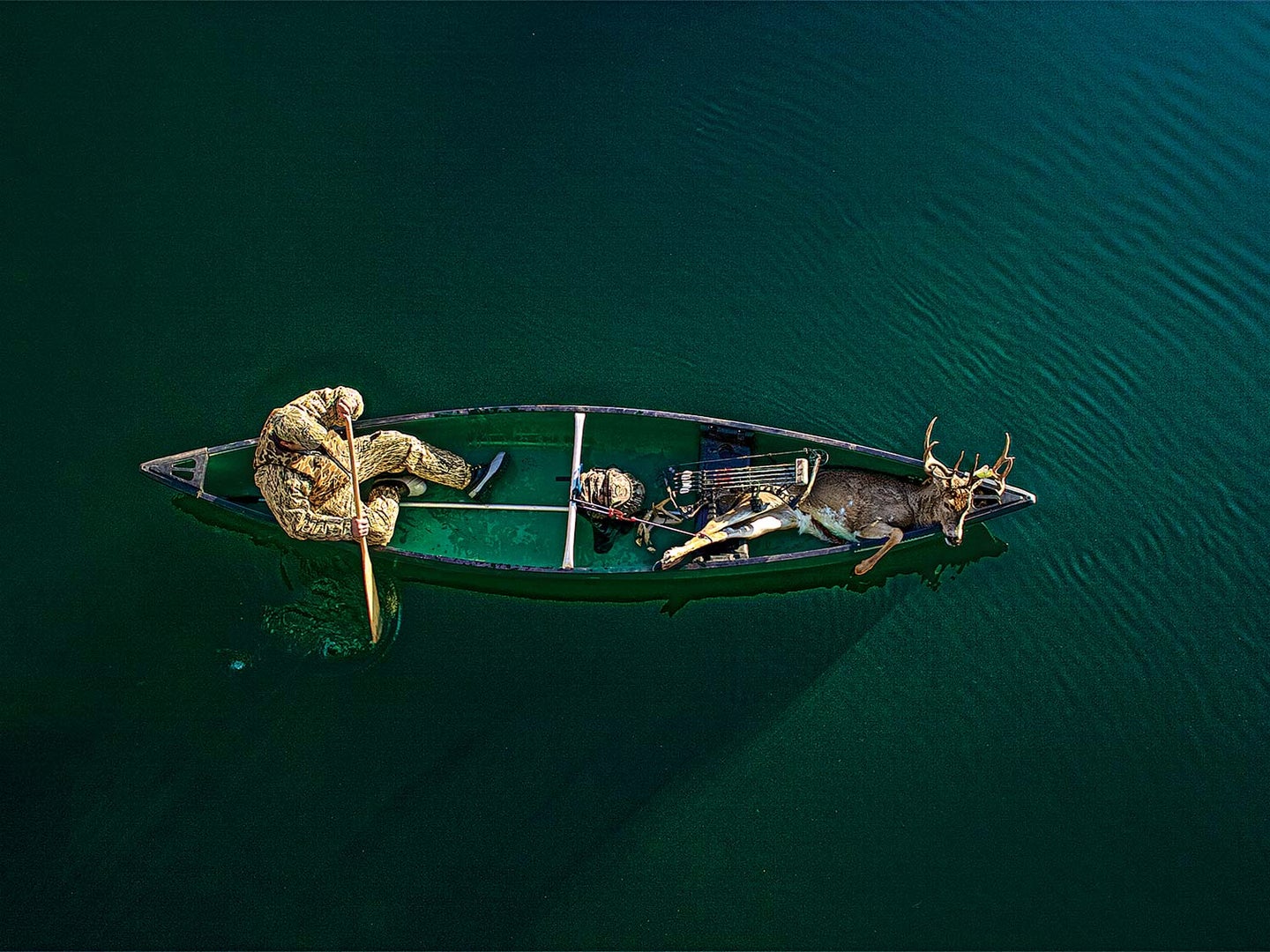 Any old canoe can be turned into an effective deer transporter. Lon Lauber
SHARE

Seven years ago, Aaron Warbritton borrowed his landlord’s fiberglass canoe to access a piece of hunting ground in Iowa. Along with a hunting buddy, he paddled a mile upstream to a prime riverbottom, and then paddled a mile back with a dead whitetail buck in his boat. These days Warbritton, a host of the popular YouTube series and podcast The Hunting Public, travels state to state, chasing bucks on public land, and taking viewers and listeners along for the ride. Warbritton and the other Hunting Public guys usually go in cold, speed-scout when they get there, then jump into a hunt. They use a variety of tools to fit their run-and-gun style—ghillie suits, tree saddles, and especially canoes and kayaks.

“You’re usually extremely quiet when approaching a spot via water, and you also leave minimal ground scent, especially if you end up hunting close to the bank,” Warbritton says. “We’ve noticed over the years that bucks tend to bed and live close to water sources. They have good cover and good security, but also a lot of available browse and water right there. That helps them stay secluded, so they don’t have to move far to get a drink.”

Bedding near a river also helps whitetails feel ­secure, and this is especially true for rivers with oxbows, or U-shaped bends. When he’s inside the U, a buck is protected on three sides, since predators don’t typically come from the water. Warbritton likes to home in on these areas and access them by boat. He selects spots using digital maps, then sets up when he finds fresh sign. To avoid bumping bedded deer, he does as little walking as possible when he gets there.

“If it’s a fairly shallow creek, there is usually a big cut in the bank on each side of the oxbow, and the dirt that came out of the cut bank kind of accumulates,” he says. “A lot of times, there’s a shallow water crossing there. The deer that bed on the tip of those oxbows have multiple escape routes down through the crossings. With the wind coming in from the land side, they rarely expect to see any danger coming from the water. We’ve paddled up to rutting bucks right on the bank in the middle of November. They just don’t know what you are.”

Zach Ferenbaugh, another member of the Hunting Public crew, stalked within 28 yards of a bedded buck last year along a muddy Iowa riverbottom after canoeing his way into the spot. He spent much of his archery season ditching the treestand and instead hunting riverbottom whitetails from the ground, like a Western bowhunter might spot-and-stalk mule deer. It made for surprisingly close encounters, and thrilling footage.

More often than not, Warbritton will just use a boat to simply cross streams and rivers, but he doesn’t let obstacles or long hauls get in his way. “In Kentucky a few years ago, we used a grappling hook to hook trees and climb straight up steep banks. It looked like something Batman would have used.” With bigger boats and outboard motors, he’s accessed areas more than 10 miles upriver. With canoes and kayaks, he’ll usually travel 2 to 4 miles.

Paddle Easy (or Embrace the Drag)

But getting there is only half the battle. Depending on local laws, a successful hunter may not be allowed to quarter a buck and will have to take it out whole in the boat. That’s not a problem with a big, sturdy canoe, but for smaller craft like lightweight fishing kayaks, Warbritton has a different solution. “You can get an inner tube, pull it behind you, strap the deer to it, and float him down the river. It gets a bit complicated if you’re dealing with any sort of current, but that’s one way to do it.”

Sometimes, Warbritton will just drag the buck out across land. “You can access a lot of the areas we hunt on foot, but your intrusion is way more aggressive that way,” Warbritton says. “A kayak helps us get in there, leave minimal ground scent, and pop up right in the middle of the bedding area. In situations where we’ve floated into areas that also have ground access, we’ll just paddle out in the kayak, and then go back and drag the deer out.”

Warbritton’s favorite way to float to and from a deer stand is to use two vehicles—one parked upstream and the other downriver. Launch your boat from the first parking area upstream and let the current carry you to your spot. When the hunt is over, get back in the water and float downstream to the second vehicle.

Whichever method you choose, scout the water beforehand for current speed, water level, and hazards. There could be snags or dammed-up logs in the way, plus rocks and rapids. Wear a life jacket, and pack along a set of hip waders in case you need to get out of the boat and portage around obstacles. Stay dry, and you’ll stay in the hunt.