Hunters all across whitetail country tagged some incredible bucks this year. Here’s a look back at some of the biggest ones 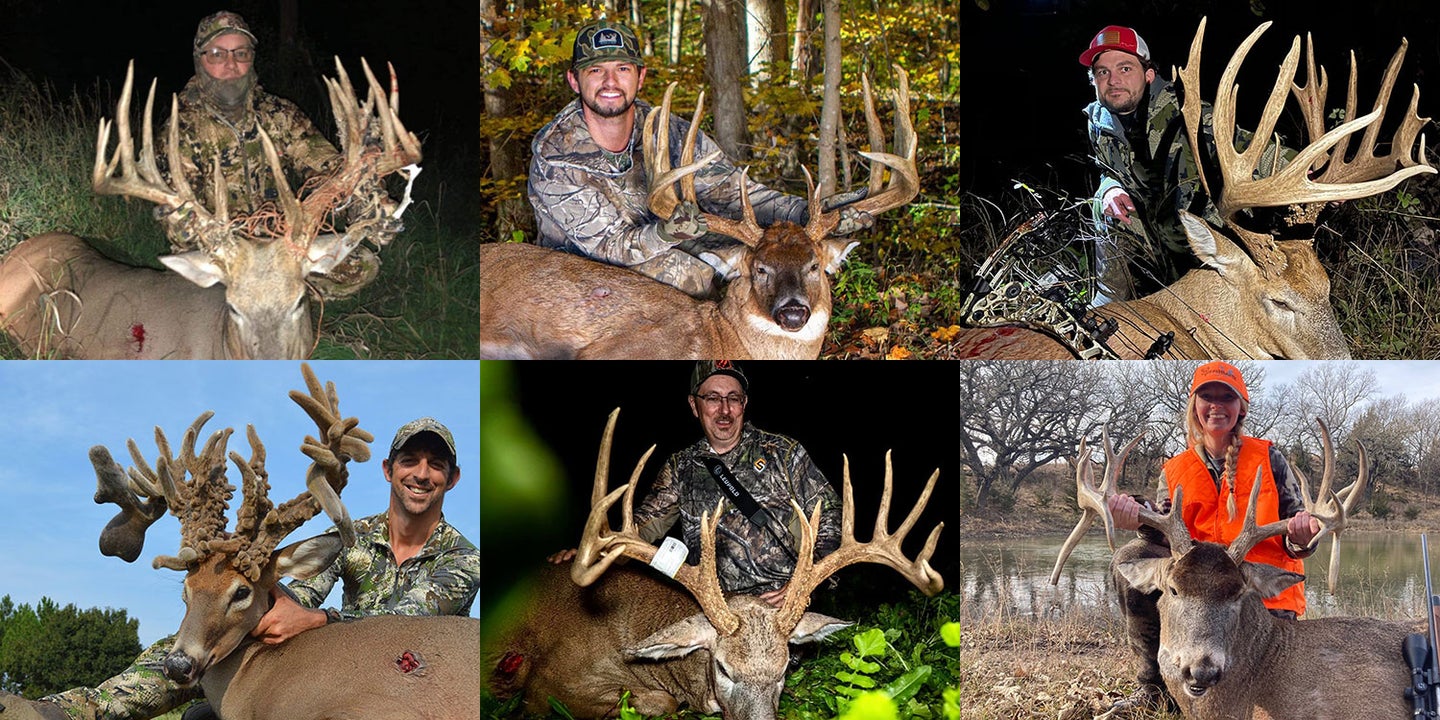 A snapshot of some of the biggest bucks taken this season. Outdoor Life
SHARE

Editor’s Note: There’s still plenty of time left to hunt this season, and to tell stories of bucks already taken this fall. Want to see your own buck story on Outdoor Life? Share it with us by emailing letters@outdoorlife.com for a chance to be featured.

No one loves a good deer hunting story more than us, and that’s why Outdoor Life dedicates much of our fall to covering the best, craziest, and strangest stories about whitetail deer that we can find. It just so happens that many of the best stories are about giant bucks.

That’s because there’s usually more drama built up around a big buck. More days, or weeks, or years are spent waiting for him, and then more nerves hit when he finally steps out. And then there’s the deer itself. A massive, mature whitetail buck is an animal to behold, and we never get tired of seeing pictures of one.

We know that there’s plenty of deer season left to hunt, and we can’t wait to see how it plays out. But with the year coming to a close, now is a good time to look back at some of the most incredible whitetail bucks taken by hunters this season. Not every one of these deer is a record breaker, but they’re all deserving of having their story retold.

Marc Somers’ first archery buck was the deer of any hunter’s lifetime. He and his buddy Cody Larrimore carefully hunted this giant Kansas whitetail on an 80-acre farm through bow season, and Somers finally got a shot on Oct. 15. The incredible buck has 21 scoreable points, with a rough green-score of 245-inches.

“My eyes filled with tears in the blind that evening with Larrimore after I’d shot the buck,” says Somers. “It’s the most humbling, rewarding and meaningful thing I’ve ever experienced hunting. I learned how smart mature whitetails are, what friends are willing to do for each other, and how much I value the chase of whitetail deer.” Read the full story here.

Our buddies at Field & Stream broke the story of this incredible typical whitetail, which will likely be the new Indiana state record and the new world-record crossbow buck. It could rank as the No. 2 all-time Boone & Crockett whitetail behind only Milo Hanson’s buck. The 12-point green-grossed 213-1/8 inches B&C and netted 208-4/8.

“I saw his tail wiggle, and then he stumbled and finally tipped over,” Huff told Field & Stream. “When I climbed down and walked up to the buck, it still didn’t even seem real. I honestly thought I had a 170- or 180-inch deer, as I’d never seen anything close to that big before. His body was big too; he field dressed around 230 pounds, and it took me and four buddies to drag him out.” Read the full story here.

We’re betting there weren’t many public land bowhunters who killed whitetails bigger than this one during the 2021 season. Doug Williams was hunting a patch of public Illinois timber with his grandson and his grandson’s friend when this stud stepped out.

“I looked down to snap my release onto my bowstring, getting ready to see the buck that was grunting,” Williams says. “When I looked back up I saw his rack outside his ears and I knew it was a shooter.”

Williams’ buck is a main-frame 7×6, with a split browtine on one side, for 14 scorable points. The deer is an estimated 5.5-year-old and rough scores 194 inches. It also happens to be the fourth giant buck taken by the Williams family from the same tree over the course of 17 seasons. Read the full story here.

Mark Drury has killed a lot of big whitetails, but this is one of his biggest of all time. The 17-point Iowa buck scored 216 5/8 inches and weighed well more that 200 pounds. The Drurys had been monitoring the buck on their Iowa property for years and had trail camera photos of him going back to 2018.

“I wasn’t even focused on him, but much to my surprise and delight I got some post-velvet photos of him in September 2021, then even a daytime photo on a food plot where I’d taken another great buck,” says Drury. “On Sept. 30 he just disappeared again. I was convinced he left our farm again to go off for the rut or his autumn range.”

“We decided to try hunting for him on Oct. 7, because a weather front came through that night, cleared off and a nice south wind made the spot ideal,” says Drury. “And we knew he was still around, he’d not yet left the property.”

Drury was right, and he made a 43-yard shot on the buck that evening. Read the full story here.

When C.J. Garrett’s 6-year-old son Grant was diagnosed with  with Severe Aplastic Anemia, a disease in which the bone marrow fails, C.J. knew that his best hunting buddy would have to sit out most of the season.

“He’s my best friend and hunting buddy, and he missed out on hunting the giant buck we’ve been tracking on our farm with trail cameras,” C.J. said. “I want this Kansas buck to catch the eye of people who can help Grant. There are over 4,000 people awaiting donors for life threatening conditions, like my son, without a matched donor. This deer is dedicated to Grant’s fight with AA, and I told him I’d call him the minute I arrowed the buck.”

C.J. was able to get into bow range of the buck he was after in November. The 18-point buck green scored 220 inches. Of course, he immediately called his son, Grant.

““I took Grant to the spot where the arrow hit the buck, and he tracked the deer right to where he fell,” C.J. recalls. “It was a great moment for all of us.” Read the full story here.

Zack Meadows passed up a 190-class buck to tag a deer that could break the Oklahoma record for a typical archery buck. When the big nontypical 190-inch buck started getting nervous, Meadows had a good idea that an even bigger buck was coming.

“I see [the nontypical] get all puffed up and licking his lips—acting scared,” Meadows told the Oklahoman. “I thought, what in the world could be out here scaring this deer? I knew something was happening. I start looking around and I could see the antlers [of the bigger buck] coming.”

The two deer sparred, and Meadows eventually made a 60-yard shot on the bigger deer. The giant whitetail fell after going only 25 yards. Terry Mayberry of Terry’s Taxidermy in Oklahoma City green-scored Meadows 16-point, 7-year-old buck at 210 inches. Read the full story here.

Danny Goldammer nearly died from COVID-19 last winter, but this fall he’d recovered enough that he was able to hunt. His hunting buddies were so happy that he had survived that they gave him the green light to target a giant buck, nicknamed “Tiny Ten,” that they’d been monitoring for years.

His buddy had spotted Tiny Ten in a hollow, so Goldammer snuck in to still-hunt the buck. Before long, he spotted the massive buck bedded in the timber.

“He was still laying in the same spot, and I could see his whole body,” Goldammer recalls. “That was the most exercise I’d had in 10 months following COVID, and I was excited and breathing heavy. So it took a few minutes for me to calm down, get a good rest with my rifle on a boulder, and settle my scope’s crosshairs on him.”

The 4.5-year-old, 15-point buck had a field-dressed weight of 220 pounds, and green-scored right at 200 inches. Read the full story here.

New York isn’t renowned as a big-buck state, but there are plenty of hardcore deer hunters killing mature bucks there each season. And this 20-point whitetail, nicknamed Houdini, is certainly among the biggest to come from New York this season. Colt Russell, a self-described meat hunter, still-hunted his way into bow range on this incredible buck.

“I didn’t even have an arrow nocked, and was only 250 yards from my truck, when all of a sudden I saw a huge-bodied deer moving through some woody cover about 60 yards from me,” says Russell. “I knew it was a large buck from its body shape, but I couldn’t see it’s rack well because it was getting dark in the canopy of big trees around me.”

“I could see the deer fine, and had an open window to its chest and vitals at 50 yards,” he says. “I just couldn’t see the rack well when I shot.”

At Colt’s shot, the buck dropped where it stood. It is, by far, the biggest buck he’s ever killed. Read the full story here.

When Georgia bowhunter Benny Overholt passed on a big buck with a broken rack last season it was one of the best deer hunting decisions he’d ever made. He watched through trail camera photos as the buck never shed its velvet the next summer and continued to grow a monstrous rack. Overholt later learned the buck must have had some type of injury. Its testes were malformed, which he believes had something to do with the buck not shedding its antlers, and instead just growing a giant rack covered in velvet.

In September, he made a perfect archery shot on the buck, which will score somewhere over 200 inches.

“I’m really humbled by the whole experience, and feel blessed and honored I just happened to be the bowhunter who took such an incredible animal,” Overholt says. “I didn’t do anything special to take such a remarkable deer, I feel truly fortunate to have been able to watch that buck grow on our farm, and to be able to harvest it.” Read the full story here.

South Dakota bowhunter Mike Beadle glanced behind him to spot this incredible buck standing broadside, only 18 yards away. He’d been monitoring the deer since May.

“I used the tree trunk as cover to draw my 60-pound Hoyt bow,” says Beadle. “But I had a hard time anchoring. I mentally couldn’t do it. It really was buck fever. I was so excited. But I gathered my senses, calmed down, and said to myself, just focus on the spot to aim.”

He made the most of the opportunity with a perfect bow shot.

The buck is a 12×14 main-frame with double drop-tines and sticker points going everywhere. It gross scored 218 7/8 inches and, strangely, it had about 100 feet of wire wrapped around its antlers. Read the full story here.

This old phantom buck would show up on trail cameras, but was never seen on hoof. That’s until Lyndzee Rhine spotted him coming out of a draw at 275 yards one cold Kansas morning. Rhine steadied her rifle and then made what felt like a good shot. But when her friends and family came to help recover the deer, they found little blood.

“Initially, the trail was difficult to follow, because there wasn’t much blood,” says Rhine. “I’d never shot a deer from that distance, and I was worried that maybe I’d just wounded him. But once we found the trail and started on it, we found more blood and it became easier to stay with him.”

“I was just at the right place at the right time to take this great buck,” Rhine says. “Now all I want to finish this great season is to help my sister Gracie get a deer, too.” Read the full story here.