Tips from The Hunting Public: How to Locate Big Whitetail Bucks on Public Land in Kansas

Ted Zangerle and THP crew didn't kill a buck on their first hunt in Kansas this season, but they did dial in a game plan for the next hunt 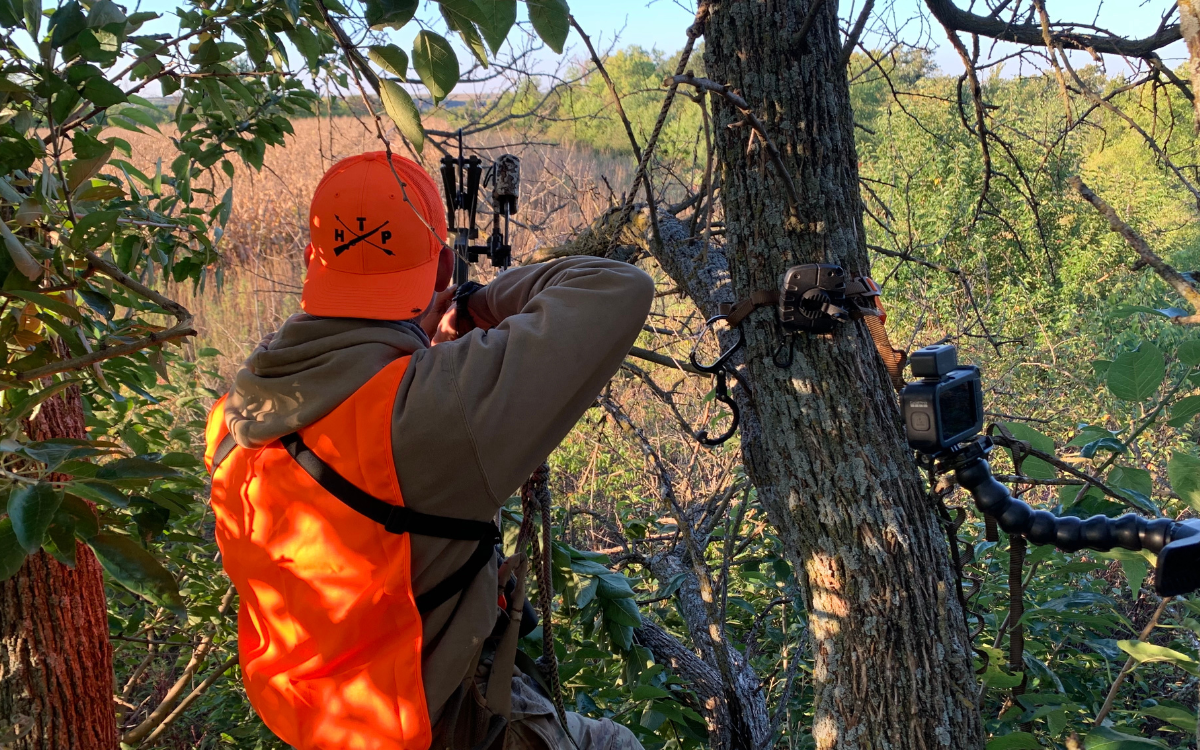 The crew treated this first hunt in Kansas as a scouting mission, but they spent plenty of time hunting, too. The Hunting Public
SHARE

For the third stop of The Hunting Public’s Deer Tour, Ted Zangerle set out for Kansas to chase whitetails on public land with his bow. Zangerle and his two cameramen, Keith Robinson and Aaron Warbritton, arrived a few days prior to opening day to scout and find find areas to focus on for their five-day hunt. Heading into their scouting, the crew planned to target agricultural fields like soybeans and corn field edges. Here’s what they learned from their hunt and how you can use it where you hunt.

Gain Elevation to Glass Wherever You Can

The Midwest isn’t known for glassing knobs or mountainous terrain, but that doesn’t mean you can’t glass. You simply have to get creative to gain elevation and observe your target areas.

The area of Kansas that Zangerle and the crew was hunting had some small rolling hills and those hills allowed the crew to glass down into a little ravine or at least to the next hill. It’s nothing like the glassing experience out in the Western states, but that elevation change allowed them to spot a few bucks prior to the opener.

Aaron Warbritton even took the opportunity to drive across a bridge, find a safe place to pull off, and glass an entire river bottom from the elevation of the bridge. Warbritton was able to glass up a few bucks from the bridge.

“Another option is to climb a tree and use that as your ‘glassing knob’, even 10- to 15-feet of elevation can give you such a better vantage point,” says Zangerle.

After a few days of scouting, Zangerle and the crew had spent the vast majority of their time picking apart large tracts of public land. Their goal on opening day was to head into areas near where they had observed bucks feeding in the agricultural fields, assuming that they would be bedding or traveling through small hedgerows or timber stands.

Once opening day arrived, Zangerle headed back into one of these areas to set up and wait for a big buck to cruise by. After an uneventful morning hunt, they relocated to a similar area a short drive away, but had similar results.

Heading into the second day, they knew they needed to switch it up.

“One of the areas Keith had scouted was a bean field a few miles back into a giant tract of public.” Zangerle says. “He had seen two or three shooter bucks feeding in the field, so we felt confident making a move to hunt the edge of that field.”

Zangerle and the crew circled their way into the area, playing the wind so their scent wouldn’t get blown out across the field, and found an oak tree about 200 yards from where they thought the buck might be bedding. There were tons of acorns dropping and clear feeding signs near that oak.

“We should have set up, but we kept pushing and ended up jumping the buck. After that, we looked at the map and saw another bean field up the creek about 300yards away,” says Zangerle.

Once they arrived at the edge of the bean field, they found a patch of oaks dropping acorns on the edge and decided to set up there. That evening, they saw 5 or 6 does across the field and right at last light, two big bucks came and ate acorns at the base of their tree, five minutes after legal shooting time.

READ NEXT: Will Kansas Become a Preference-Point State for Whitetail Deer Hunters?

Zangerle admits, he and the THP crew typically focus on the larger tracts of public land, but for good reason.

“That’s what we are used to, lots of acreage and the ability to dive deep into the public to get away from other hunters.”

“Once we got back to camp that night, we dropped off our equipment and drove around to check some small tracts of public land with a spotlight, just to see if we could locate bucks feeding in the fields,” Zangerle says.

While they were scouting that night, Zangerle spotted a nice buck on one of these small tracts of public. That next morning, they entered the small tract to hunt the buck they had seen the night prior. They didn’t end up having an encounter with the buck, but Zangerle had a game plan for the rest of their hunt.

“We did a lot of bouncing around driving around to these smaller tracts of public, trying to get eyes on deer. Once we started doing that, we ended up having more and more spots to bounce to. We didn’t get eyes on another shooter doing that, but we found areas that had deer and lots of sign.”

READ NEXT: Tips from The Hunting Public: How to Hunt Whitetails in Public Land River Bottoms

Zangerle used this hunt mostly scouting trip. There was a lot of public land and they wanted to cover as much as possible.

The big tracts of public land they were scouting and hunting in the beginning of their trip were over 10,000 acres. The smaller tracts where they spent the last two days were around 500 acres each (which sounds big, but in open country properties of this size hunt much smaller). Zangerle found that these smaller tracts allowed him to break down the area more efficiently and find an area to set up and hunt much more effectively.

“Those small pieces only have one or two little draws with trees and a creek cutting through them. Once you find a piece that holds deer, it’s easier to pattern them in such a smaller area.”

To quickly break down the small tracts of public land, Zangerle would pick out a spot on the map based on where he was seeing deer while driving around. He would then slip into that spot, set up and hunt it for a few hours. On the way in or out of these spots, they were scouting as well, looking for trails or feeding areas.

Zangerle noted, if they had simply gone into these small tracts just to scout, they’d have likely spooked the deer out of the area. They always made a game plan to go in and hunt a certain area on these small tracts so there wasn’t as much disruption.

If you find yourself consistently hunting large tracts of public land, trying to go deeper than other hunters with limited success, find one of these small off-the-wall public land tracts and make a move. You might be surprised by what you find. For Zangerle’s part, he’ll be back to Kansas later this month putting his new game plan to the test.