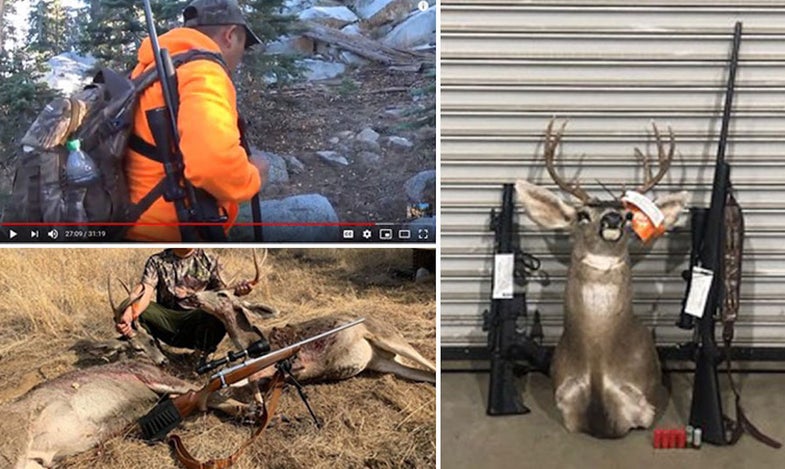 While watching hunting videos on YouTube, a California Department of Fish and Wildlife officer spotted a convicted felon carrying a bolt-action rifle during a deer hunt. It was a violation of his probation, according to a CDFW Facebook Post.

Sign Lee of Fresno, California, was on felony probation stemming from previous convictions for domestic violence and possessing a firearm as a prohibited person. Officers spotted Lee while watching hunting-related videos on YouTube (the video appears to have been taken down). In the video, Lee was carrying a bolt-action rifle while deer hunting.

In addition to the YouTube video, officers located social media photos that showed Lee with two bucks and a rifle on the ground. Officers with the CDFW, Fresno County Probation, and Fresno County Adult Compliance Team went to Lee’s home in Fresno to do a compliance check. While there they found the same bolt-action rifle in the video, a short-barreled AR15 (outlawed in the state) with no make, model, or serial number, and several rounds of rifle ammunition and shotgun shells. All of these weapons and the ammunition violated Lee’s parole.

Additionally, officers said the deer mount found in Lee’s residence was consistent with the one seen in the social media posts. Lee admitted to illegally transferring his tags to someone else who was without deer tags.

Read Next: Two Florida Men Arrested for Poaching Deer in a Subdivision with a Pellet Gun

Lee was arrested and pled no contest to being a felon in possession of a firearm, “possession of an assault weapon,” unlawful transfer of a deer tag, and unlawful possession of deer. On May 3, he was sentenced to 16 months in the California Department of Corrections and Rehabilitation. Officers seized all evidence, including the firearms and deer.

In California, it is illegal for anyone who has been convicted of or has an outstanding warrant for a felony in the state of California or any other state to own or possess a firearm, according to the California Department of Justice. There are also several other infractions that can cause the state to prohibit gun ownership, including but not limited to various misdemeanor crimes, several types of violent crimes, and court orders due to insanity or mental incompetence.