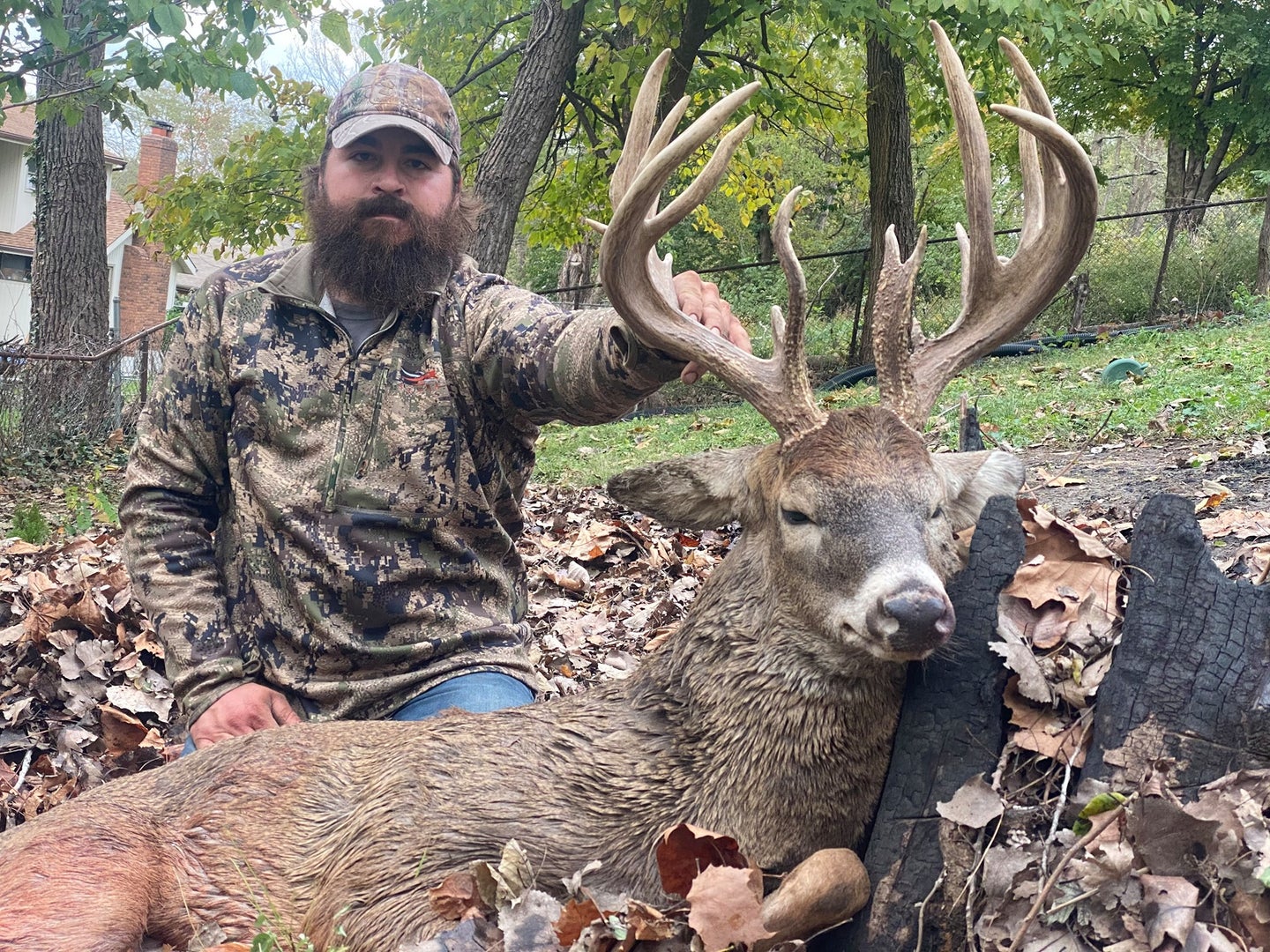 Parker Brown, 32, landed a new spot to hunt south of Kansas City and had high hopes for the property right away. In early October, he wanted to get an overview of the farm, so just after a rain he and his son made a speed scouting trip.

“We had the wind in our faces and were walking up on bedded deer,” he says. “I found two built tree stands and several other good places to hang stands. I hung a stand where the most deer sign was. Put up a cellphone camera and left the farm.”

Brown hunted that stand at Halloween, saw several does, no bucks, but learned a lot about the farm.

“The crops were still standing and deer were bedding in it near a cut bean field,” says Brown, the general manager of a Kansas City business. “There were deer beds everywhere in the uncut crop field. After that Halloween hunt I decided not to enter property until the crops were cut.”

On Nov. 4 conditions were perfect, and Brown decided to sit all day in an old permanent wooden stand in the middle of the property near the crop fields and a deep bordering creek.

Brown used a QuietKat electric bike with trailer to get near his hunting spot. But the woods were so still, and the ground so noisy from fallen leaves and cut corn stalks, that Brown left the QuietKat. He walked the last 300 yards slowly and quietly to the stand.

It took an hour to silently reach the stand, and he found five fresh scrapes on the way in. Brown placed a deer decoy within bow range of the stand, then climbed and settled in about 20 minutes after shooting light. At 9 a.m. a 130-inch, 8-pointer walked near his stand at 12 yards. It stopped and looked at the decoy.

“Either the wind swirled, or he didn’t like something, because he blew and ran 10 yards away and stood there for 10 minutes before walking off the way he came,” says Brown.

Growing impatient, Brown decided to try a grunting and rattling sequence. Then if nothing happened, he was going to leave and relocate to hunt a different stand.

“I made a few light grunts, and raked my rattling horns on the tree,” says Brown. “The last few grunts were louder, almost a roar. Then I grabbed both antlers, and tickled them together for 10 seconds, then finished the last 10 seconds with heavier antler clacks.”

As soon as Brown stopped rattling, he heard a deer coming.

“He was probably bedded about 75 yards behind me, and the grunting sequence got his attention,” says Brown. “When he heard the rattling, he came fast.”

The buck was running so fast that he got passed an open shooting lane Brown had eight yards from his stand. The buck was down in the creek bed, with Brown high up in the stand, 35 feet above the deer.

“He was staring at the decoy, and let out a deep, long grunt, just five yards from where the other 8-point buck got spooked,” Brown says. “He turned his head and I drew my bow, centering the pin behind his shoulder, and sent the arrow.”

The giant buck dropped in its tracks, spine shot. Brown field dressed the buck and used his QuietKat to haul it out. He estimates the buck is at least 7.5 years old and weighed more than 200 pounds. Its estimated green rack score is 195 2/8s inches.

“If I would have accessed the farm the normal way and just walked to the stand, I never would have got a shot at that buck,” says Brown. “Speed scouting and not being intrusive on the property is what produced this old deer for me.”