Ohio Bowhunter Tags a Giant Buck on a Small Property 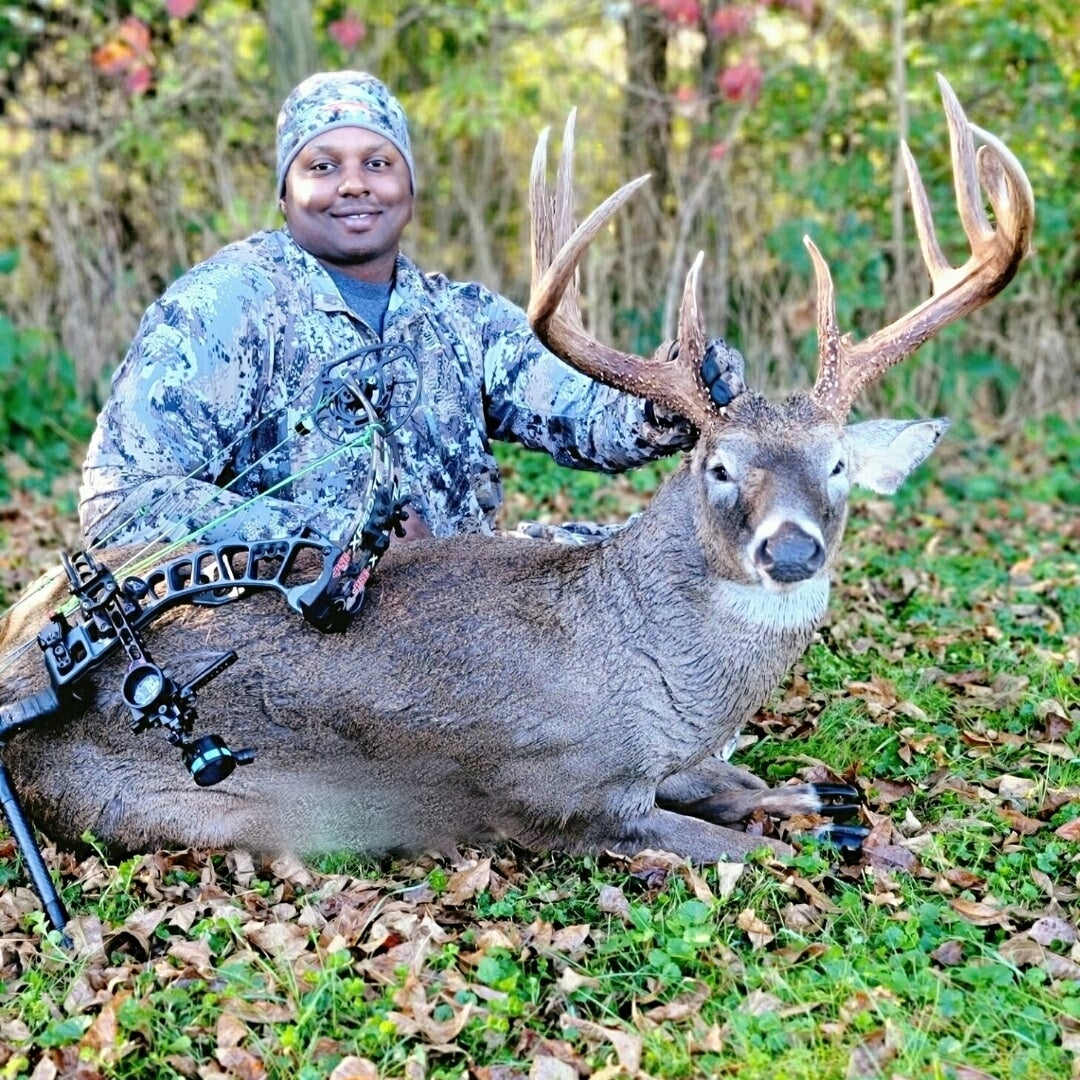 Chez Martin with a stud of an Ohio 10-pointer.
SHARE

“I went to the stand very early—at 3 a.m.,” says Martin, who lives in Milledgeville. “It was cool with a north wind, in the low 60s, and the temperature had dropped about 10 degrees from the previous day. I was on top of a ridge, a flat that’s a good corridor between a bedding area and a nearby CRP field, about 100 yards above a dry creek bed.

“There were scrapes on the ridge, and bucks were in pre-rut. I wanted to be in that stand and settled long before deer started moving that morning.”

Soon after daylight Martin started seeing deer from his stand. A small buck came down a trail, but acted skittish. Then a couple does below the ridge started blowing, and Martin looked around and spotted a coyote, which is why the does and young buck were nervous, he figured.

Time passed and a few more does showed, feeding on the ridge. A pair of does bedded down 40 yards from Martin. Then another doe came running through the area, followed by a young 8-pointer. A couple more does and more young bucks moved around up the ridge from Martin.

“It was all happening so fast, and there were deer moving around everywhere,” said Martin, who works as a home inspector for Premier Properties, owned by Lou Willard the famed former Ohio State running back.

Martin was hyper alert and soon spotted a good-size tree shaking violently in a bedding area near the CRP 70 yards away.

“It was a good buck, because I could see a tine occasionally,” said Martin. “But I couldn’t get a good look at the deer behind the tree, though I thought he would work closer to me.”

Suddenly the buck showed in a very thick area 30 yards from Martin. But as the buck neared an open shooting lane, a doe appeared right below Martin so he couldn’t move his bow for fear of spooking the doe.

“I was way above him in my tree, higher up on the ridge, and he turned to look at some does and a small buck,” says Martin. “He was broadside to me at 25 yards and that’s when I could draw, anchor and release.”

Martin saw the lighted-nock arrow hit the buck perfectly. And he heard it strike the buck, too. His arrow with with a Grim Reaper mechanical broadhead passed completely through the deer.

But the buck didn’t move.

“I think he was so focused on the small bucks and does nearby, that he just stood there, like nothing had happened,” Martin said. “I saw some blood and saw my arrow [buried in the ground], but he’s just standing there at 25 yards.”

“The bigger buck is quartering away, and I knocked another arrow, drew, anchored and released, hitting him a second time at about 40 yards, the arrow completely burying deep in the deer passed the fletchings .”

The buck ran after the second arrow, but not fast, disappearing into a thick area Martin couldn’t see into.

Martin sat in his stand for a while, does and small bucks still all around his tree feeding and chasing one another.

“I sat there and prayed I made good shots on the buck, then I called my wife Heather [a nurse] and told her what was going on,” Martin said.

Soon the deer around Martin’s stand moved away, and he came down and looked for a blood trail from the buck, but there was none. He looked carefully but could find no trail leading to the deer. Finally, he walked out of the woods, met his wife, and the two of them went back to Martin’s stand and started looking for the buck in a grid-search pattern.

“It was rough in that thick cover, with downed trees, logs and steep terrain, but Heather is a trooper and we stayed searching for a while,” remembers Martin. “Finally, I caught something that didn’t look right under some thick overhanding tree branches and I saw a deer, my buck, its rack half buried in dirt when he went down. He was laying in some thick brush, between a couple logs. There was no blood to speak of on the ground, though the broadheads did well, with lots of internal bleeding inside the deer.”

The buck had gone only about 80 yards from Martin’s stand. But with no blood trail, and super-thick cover, locating the downed animal was difficult.

Getting the buck out of the deep ridge area was a grind, too. They field-dressing the buck, and used a cart to move the 250-pound buck about 500 yards to their vehicle.

The buck has 22-inch long main beams with 6-inch circumference measurements at the bases. The 10-pointer has a 19-inch inside spread with lots of mass and has been green-scored at 165 inches.

Interestingly, the buck isn’t the biggest Martin has tagged. He shot a 175-inch 10-pointer with his bow in 2018 in a nearby hunting spot. He’s a taxidermist, and mounted that buck, and will mount his most recent deer, too.

“I looked at the buck’s teeth and he’s not that old, maybe just 3.5-years,” Martin reports. “I know he could have grown bigger in the next few years. But I only hunt small woodlots. They’re not sprawling land holdings. So when a good buck comes in bow range I’m smart to take him because I may never see him again.”