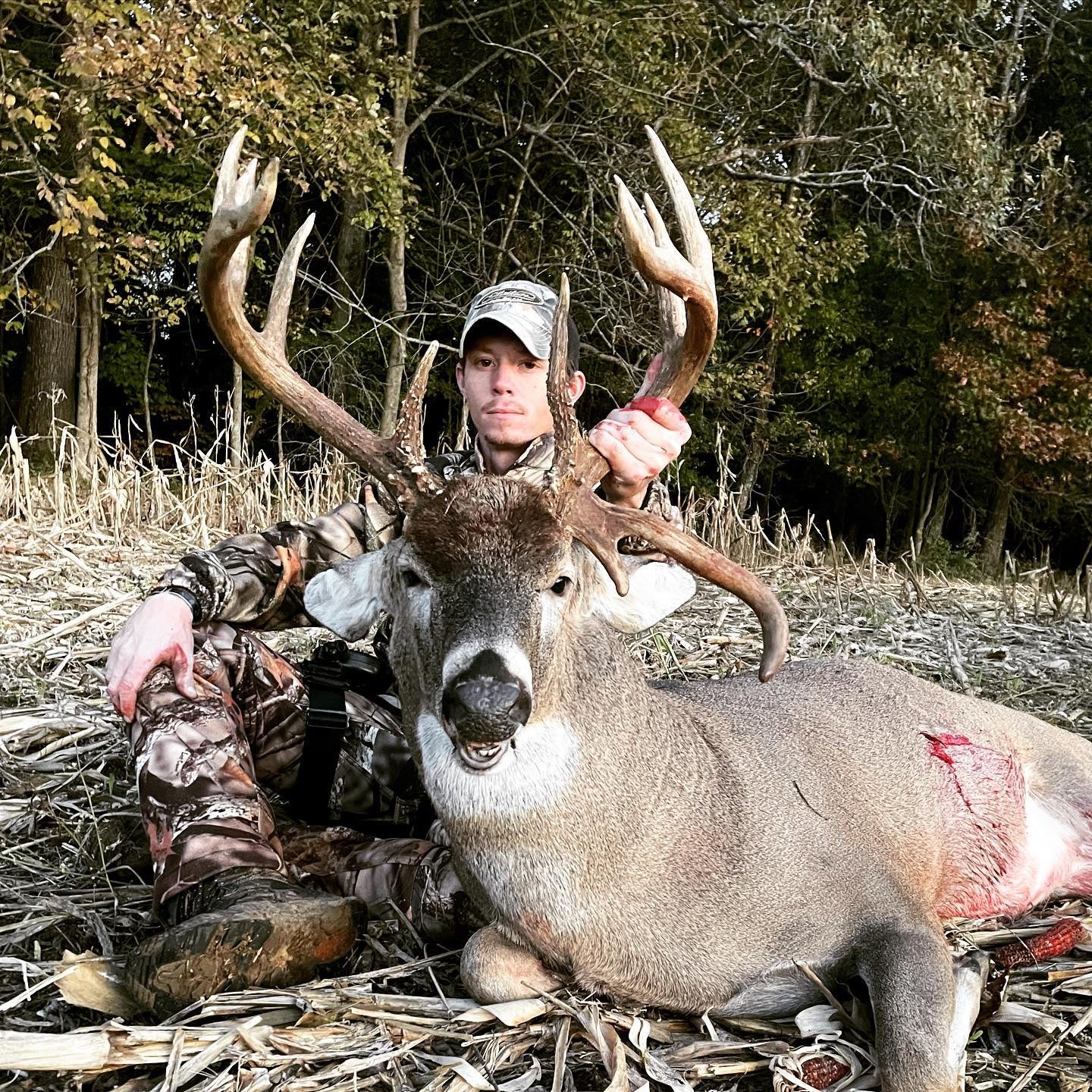 Currier Gill, 26, was well-acquainted with the giant Kentucky drop-tine buck he arrowed on Nov. 2. He and some hunting pals operate nearly two-dozen trail cameras on the properties they farm and manage for hunting, keeping close tabs on deer health and buck movement.

The buck vanished during the 2020 season, but reappeared on camera in 2021. It had grown appreciably, and also developed a giant drop tine on one side of its rack.

Rain was clearing to a light drizzle the day Gill ended up shooting the 13-pointer, which also had a second smaller drop tine emanating from the main beam. He had climbed into a treestand perched 40 feet up on the edge of a swamp to get as high as he could to see better.

“I was really after a couple of bigger bucks I knew were in that area,” Gill said.

The drizzle quit about 8 a.m. and Gill heard a buck grunt close behind him. He slowly turned and saw the drop-tine buck just 15 yards away.

“I didn’t even know that buck was in the woods, and I thought I blew it, ‘cause he took off running,” Gill said.

At 4 p.m. Gill went back to the same stand. There were two scrapes within 30 yards of the tree he was in, and a well-used game trail 20 yards away. Gill saw nothing for 30 minutes, then spotted the drop-tine buck 120 yards off.

“I wheezed at him one time, and that got his attention,” Gill said. “He walked in a half circle around me, rubbed, and worked-over a small tree for about 20 minutes. Then he walked straight to my tree, looking for the buck he thought I was, I guess. It took him about 30 minutes to get within bow range.”

Gill had to wait for the deer to turn at 30 yards before he could draw his Mathews VXR bow.

“He finally turned, really pretty far around, but I was able to [get] an arrow into him as he was quartering away,” Gill says. “It was a tough shot angle, but when I let the arrow go, it zipped right through him. When he tried to run, he just plowed into the ground. He didn’t go 100 yards, and I saw him fall.”

Read Next: 6 of the Biggest Kentucky Velvet Bucks from This Fall

Gill had friend Ryan Watkins help load the estimated 210-pound deer into the truck bed, which they were able to get just 50 yards from the whitetail.

The 13-point buck is a giant, with two droptines coming off one main beam. The bigger droptine is nearly 13 inches long. The deer is estimated at 6.5-years old. Its rack hasn’t been measured.

“I hate throwing numbers at a deer’s rack,” Gill says. “The deer is old and plenty big enough for me, with a rack having a lot of character. When someone askes me what he scored, I just say ‘six-and-a-half’, and they get my point.”