Oklahoma Bowhunter Gets a Second Chance at “Junior,” an Underweight Buck with an Oversized Rack

After a heartbreaking hunt, an Oklahoma bowhunter gets a second chance at the 150-class buck he'd been watching for years 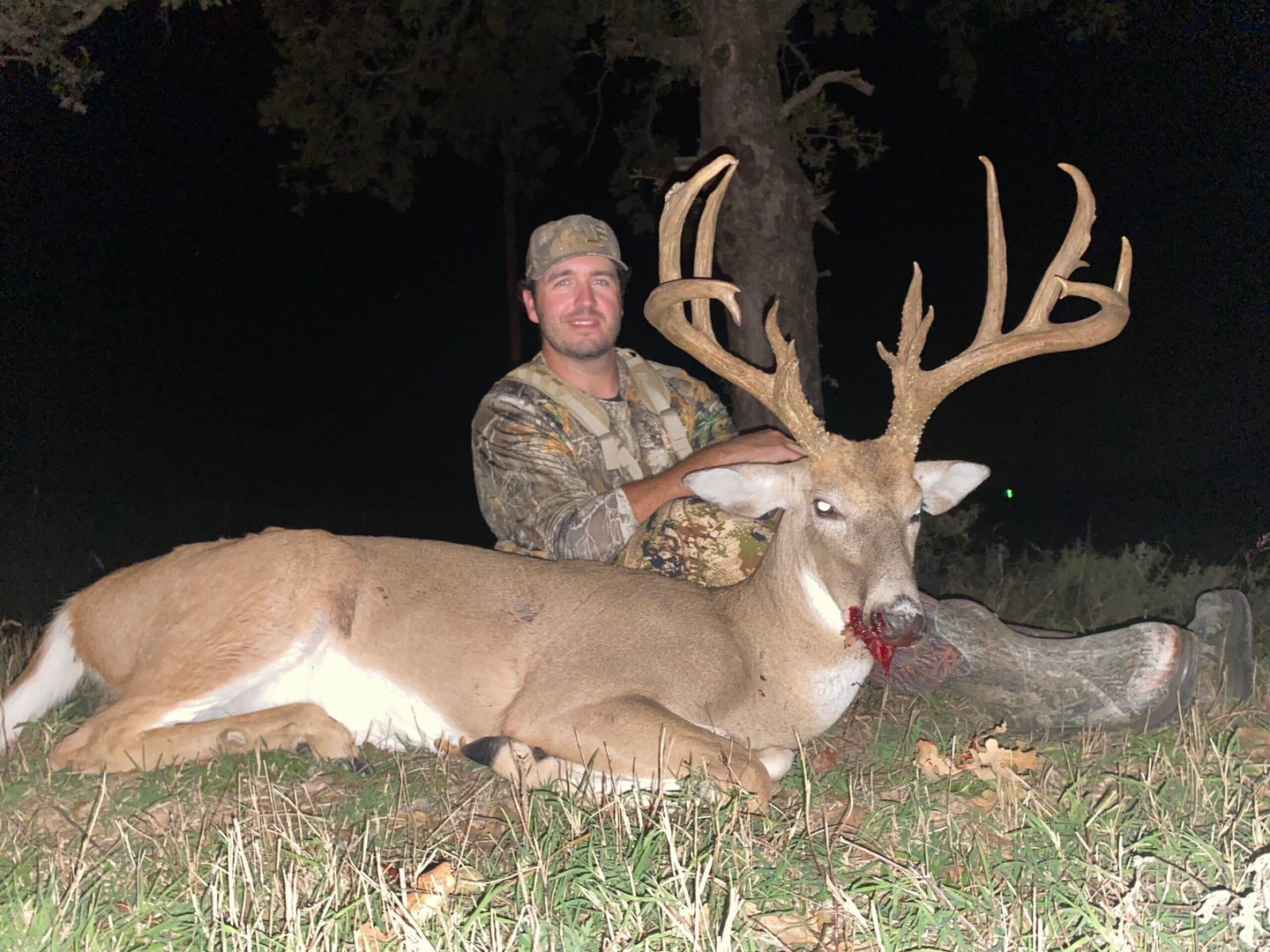 Austin Stephens had a rough October. On Oct. 13, he arrowed and lost the buck he’d been watching for four years on his family’s hunting lease in south-central Oklahoma. The only good thing about the situation was that it wasn’t a lethal hit, and the buck survived.

Stephens first spotted the buck in 2018, in a series of nighttime trail camera photos.

By 2019, the buck’s antlers had grown significantly into the 130-inch class. Stephens had plenty of trail camera photos of the buck, but they were mostly taken at night.

“It was hard to pass the buck that second year, but we got only one photo of him in the day, then he went completely nocturnal after the 2020 rut,” recalls Stephens, a dedicated bowhunter. “But after the rut and gun season, the buck just showed back up on camera that winter. I was glad he made it through gun season, so we’d get another chance at him.”

Photos of the buck started to roll in again this year. Stephens began to pattern him and noticed something unusual.

“In late September, before the season opened, I looked closely at photos of him, and his tongue was hanging out oddly, and his bottom jaw was sagging down,” he says. “Then I noticed he was getting skinny, like he was having trouble getting enough food. He had a huge rack, but he was a small deer, so we named him ‘Junior’… We figured that he somehow broke his jaw and was having a tough time eating. That’s when I started putting out ‘Whitetail Seduction Deer Mineral’ to help him get enough to eat, and he loved it. I also decided that the first chance I had to take him I would, because his rack had a lot more mass, and I couldn’t imagine him living another year.”

When Stephens climbed into a treestand on the afternoon of Oct. 13, the conditions were perfect. He saw does, yearlings, and a small buck, and then he heard a soft grunt. Junior had shown up.

“He ran off the does, and turned just perfectly at 35 yards,” says Stephens. “I drew my bow, released my arrow, and Junior dropped straight down. The arrow hit just under his back, very high into that region below the backbone and above the vitals of the chest cavity. I was sick that I’d made a bad shot.”

Junior dashed away, and Stephens came back with his buddy Zack Burks two hours later. The men searched for hours without any sign of the deer. They called in a tracking dog, which led to a single drop of blood where they found Stephens’ arrow with very little blood on it.

“We did some grid pattern searching and looked another couple hours with no luck,” says Stephens. “I had to work nights that next week, so we stayed out of the area the entire time.”

Read Next: What It Feels Like to Miss the Biggest Buck of Your Life, at 45 Yards

Another Chance at Junior

“You couldn’t even see he’d been hit with an arrow,” Stephens says. “And he was heavily eating the mineral feed I’d put out, sometimes gorging on it for 40 minutes at a time.”

Even so, Junior still had major issues with his presumably broken and slack-bottom jaw, with his tongue hanging out.

Oct. 24 was another perfect day for a bowhunt and Stephens climbed in his treestand well before daylight.

“Just before legal shooting light, but enough light on the horizon to see a little, I spotted Junior’s rack coming in close,” Stephens says. “But he turned and left before it was light enough to shoot, and mid-morning I got down and went home.”

That afternoon the wind was swirling, and Stephens didn’t like the conditions. But he felt good about the stand because Junior was eating mineral supplement regularly. So, he went back to the stand, and waited.

“At 6:40 p.m. two does and a small buck showed up just as the wind died,” Stephens said. “All of a sudden the little buck bristled, and I heard Junior grunting before I saw him.”

The small buck moved away, as Junior got to his mineral feed area, standing broadside at 32 yards. Daylight was fading fast, and Stephens was waiting for a perfect shot at the deer. The buck made a forward step and turned quartering away, exposing its rib cage. Stephens drew his bow, aimed, and released his arrow.

The Crimson Talon 2-blade, 100-grain expandable broadhead hit Junior perfectly behind the shoulder, and he watched his lighted-nock arrow pass completely through the buck. Junior dashed into thick cover, and Stephens heard the deer crash about 30 yards into the thicket.

Read Next: After Being Barred from the Family Deer Camp, Beginner’s Luck with a 215-Inch Iowa Buck

“I called Zack and my dad, and about 45 minutes later we went looking for the buck,” says Stephens. “He ran down a trail and didn’t go 30 yards before falling dead.”