How to Set Treestands in the Best Locations For Bowhunting Season

Ideal stand locations for bowhunting the early season, the rut, and late season 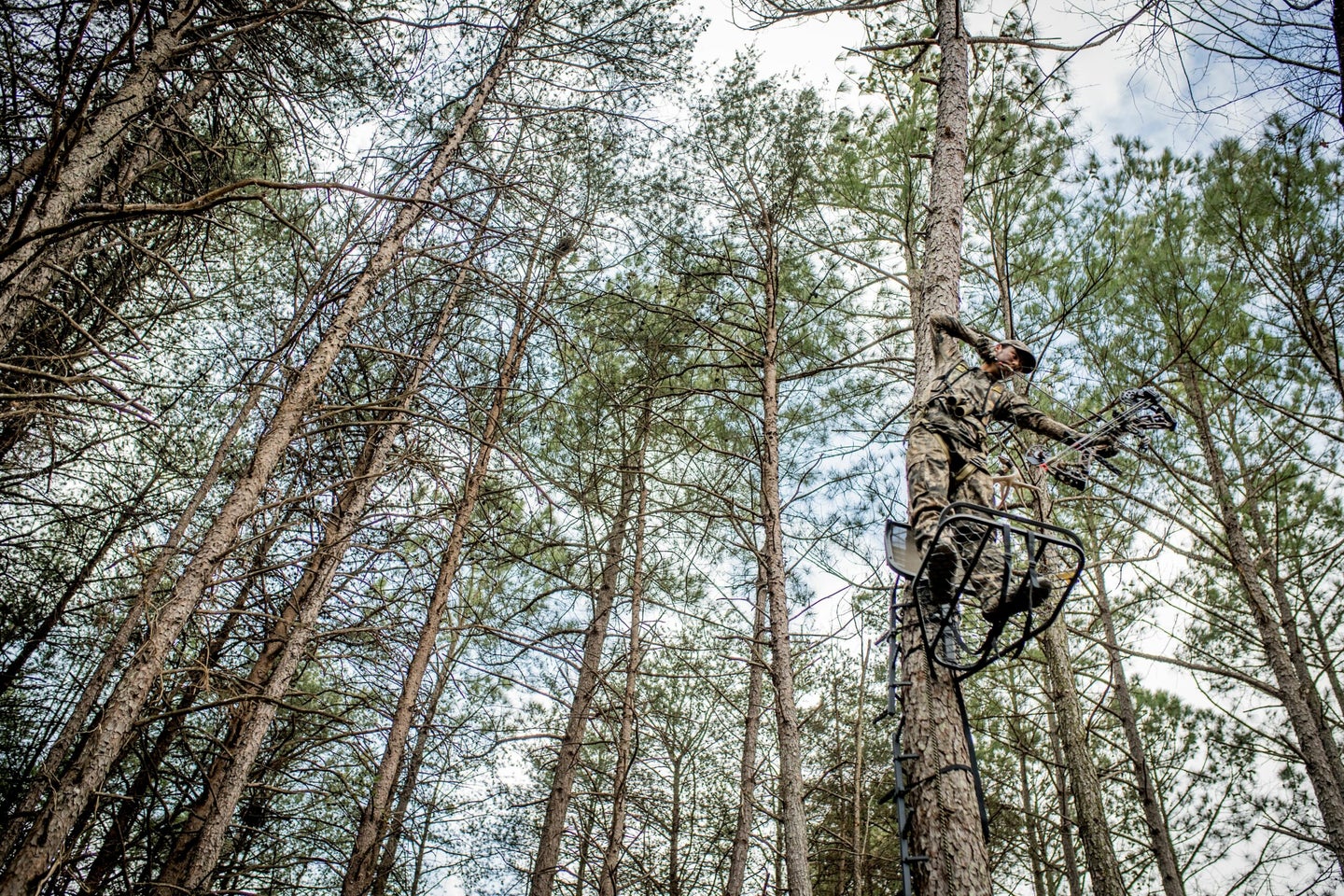 Bowhunting is a game of yards, and finding the right tree is critical. Realtree
SHARE

There was a time when my treestand placement strategy simply involved leaning a 10-foot homemade ladder stand against a tree that allowed for maximum visibility. In those early days of my deer hunting career, the goal was to find a spot were I could just see deer.

However, I quickly learned there was a big difference in deer hunting and deer killing. If I was going to put meat in the freezer, I had to learn the art of getting closer (but not too close) to deer, particularly in bow season when the shots need to be closer.

When I began to strategize getting my stands within bow range of a deer during the early season, rut, and late season, I became more detailed. I began to track where deer entered and exited the field during different times of year. I made mental notes of what trails the does used and from what trails the bucks made their moves.

When the pieces began to fall into place, I discovered a place my family now refers to as the Gauntlet, an area where we can always count on deer movement at our farm during specific times of the season. You can find similar places on the property you hunt, you just need to take a closer look at how deer move and set your stands accordingly. Here are some smart strategies for placing your stand in the right locations throughout the fall.

Hanging your deer stand on the X is essential for finding yourself within bow range of deer no matter what month of the season you’re in. You need to know where deer naturally want to be and travel. The X is your ambush point where you’ll make the shot happen. The X can be located near entry and exit points around agriculture fields, bedding areas, or funnels somewhere between the two. Again, this depends on how deer are moving during a specific time of year. You want to hang your stand within shooting range of the X. Otherwise, you’ll be watching the show from a distance.

Before I delve into stand placement, let’s talk about accessing your stand. One of the single greatest factors for success on any hunt is how you get to your stand. If you don’t have a quality access route that allows you to slip into your stand without being busted, that’s going to make it near impossible to shoot any deer. If you drive deer out of the area every time you walk to a stand, your neighbor will love you, but you likely will never draw on a deer the entirety of the season. You may get away with it with the youngest deer in the herd, but the mature deer will quickly pick up on your pattern and avoid the area altogether. It’s imperative that you hang your treestand with access in mind. If you can’t access it without spooking deer, find another stand location.

You need to have a clean and quiet route that ensures you’re not bumping deer. Clear your access trail of any brush so that you’re not leaving excessive human odor on the walk in or out or snapping twigs and rustling leaves. Creeks allow you to slide into your stand with minimal scent and noise, and it’s harder for deer to see you, because the creek bed is typically lower than the forest floor.

Consider planting or creating cover screens along field edges and access routes so there is a buffer between you and the deer. Tall prairie grasses are ideal. Sometimes you can just let these areas around food plots of fields grow up and mow them down accordingly. Yes, it’s a lot of work. But the rewards are worth it when it comes to accessing your stand with minimal disturbance to your local deer herd.

In the early season, you’ll want to make sure your stand is tucked in nice and tight to the best food source on the property you’re hunting. There’s no one-size-fits-all approach here. It’s different for every farm. This is a great time to kill your target buck as he’s likely still following early-season feed patterns that make him highly predictable.

If bean fields or food plots are the early draw, hang your stand in a tree on the field edge that allows you to shoot the entrance trail to the field. Early season bachelor groups will typically follow the same routine until disturbed, or the food source runs dry. Every buck in the bunch will follow this trail for access to the field. The smaller bucks will likely come first, with the biggest bucks typically bringing up the rear.

You’ll want to keep wind direction in your favor, but remain as tight as possible to this entry-exit trail in hopes of making the shot at the first available opportunity. Once the deer enter the field and begin to feed away from you, shot opportunities will grow fewer and farther between. The key is to stay on the downwind or crosswind side of this intersection for maximum shot opportunities as deer make their approach.

Other early-season food sources may lead you deeper into the woods. When the acorns begin to drop, you’ll see a sharp decline in the activity around food plots. This transitions varies by region, but you can often expect to find October whitetails dining on white oak acorns pretty heavy. White oak acorns are like candy for deer. You can bet your target buck knows when the nuts are on the ground.

But not just any oak tree will do. You’ve got to find the preferred feed trees at a given time. Look for excessive amounts of deer poop below these trees, indicating ample deer activity in the area. Key in on oak trees close to thick bedding cover for your best opportunity at catching your target buck slipping from his bed to dine on nuts.

While some hunters may hang their stand right in the middle of the action, I prefer to climb a tree that allows me easy access to the oak stand without having to put my boots on the ground where deer will be feeding. With their noses to the ground in a feeding frenzy, they will be quick to pick out any foreign odors from a hunter entering the location. Always avoid walking where you’re predicting your deer activity to be. Find a tree that allows you to play the wind, but is also in a location where deer cant easily see you. It’s easy to get busted in the timber, particularly when there’s multiple deer feeding at a location. A stand hung 20 yards away from the action seems to help keep your presence on the down-low and go undetected from the eyes, ears, and noses of deer in close.

The X can change in a hurry when the rut hits. Gone are the days of your target buck making predictable movements. He may be on your farm one day, and chasing does 2 miles down the road the next this time of year. The key is to know your does. It’s my go-to strategy. I hunt the does, focusing on doe bedding areas, knowing that it’s only a matter of time before a big buck comes looking for a receptive female.

Many hunters scratch their heads wondering why they aren’t seeing much activity in the fields or wide-open spaces. They haven’t considered the transition that has taken place, pushing the action in tight to the bedding areas and thickest cover on the farm.

These thickets and bedding areas play host to much of the rutting activity each season. A stand placed on the downwind side of these choice bedding areas allows you to intercept a buck as he sweeps the downwind side, scent-checking does as he cruises through. It makes for the ultimate ambush. Select a tree that allows you to monitor the hard transition line at the edge of a bedding area and climb in. Don’t worry about climbing too high at this point. Keep maximum shot opportunities in mind as deer will be on the move and a shot can happen fast.

When the late season arrives, you’ll often find that your deer herd has become predictable again. The rut is over and the sporadic activity transitions back to survival mode in a late-season feeding frenzy. The late season can be tough. It can be feast or famine depending on the access and opportunity you have to hunt in the final days of the year. But for the hunter with a late-season food source on his or her property, the best days may be yet to come.

Late-season food sources tend to make deer highly patternable once again. Much like the early season, deer will use these food plots, ag fields, or other late-season sources on a daily routine where pressure is minimal. Any buck that has survived to this point will be on a mission to rebuild what was lost during the rigors of the rut. He will be worn down and looking slim. He will fall back into patterns much like the early season as he makes his commute from bed to feed. Little else matters at this point of the season.

To get the drop on him, you simply need to know what that bed to feed pattern looks like. Fortunately, once he establishes his routine, he’ll continue the same gig day after day until he’s pressured to the point of moving on.

To kill him, hang a stand at the intersection of the field edge and entry trail he favors the most. Trail cameras can be your best friend here, allowing you to tap into the most recent intel. Despite being weary and worn down, these bucks are still sharp. Don’t get sloppy or let your guard down. Hang your stand with a favorable wind and be sure to have adequate cover to avoid being picked out. By now there will be few, if any, leaves on the trees and you can haul some cut cedars up the tree and ziptie them around your stand for concealment.