Turkey Hunting Is the Best Way to Introduce Someone to Hunting. Change My Mind

Deer season is great and all, but if you really want to get a new hunter hooked? Take them turkey hunting 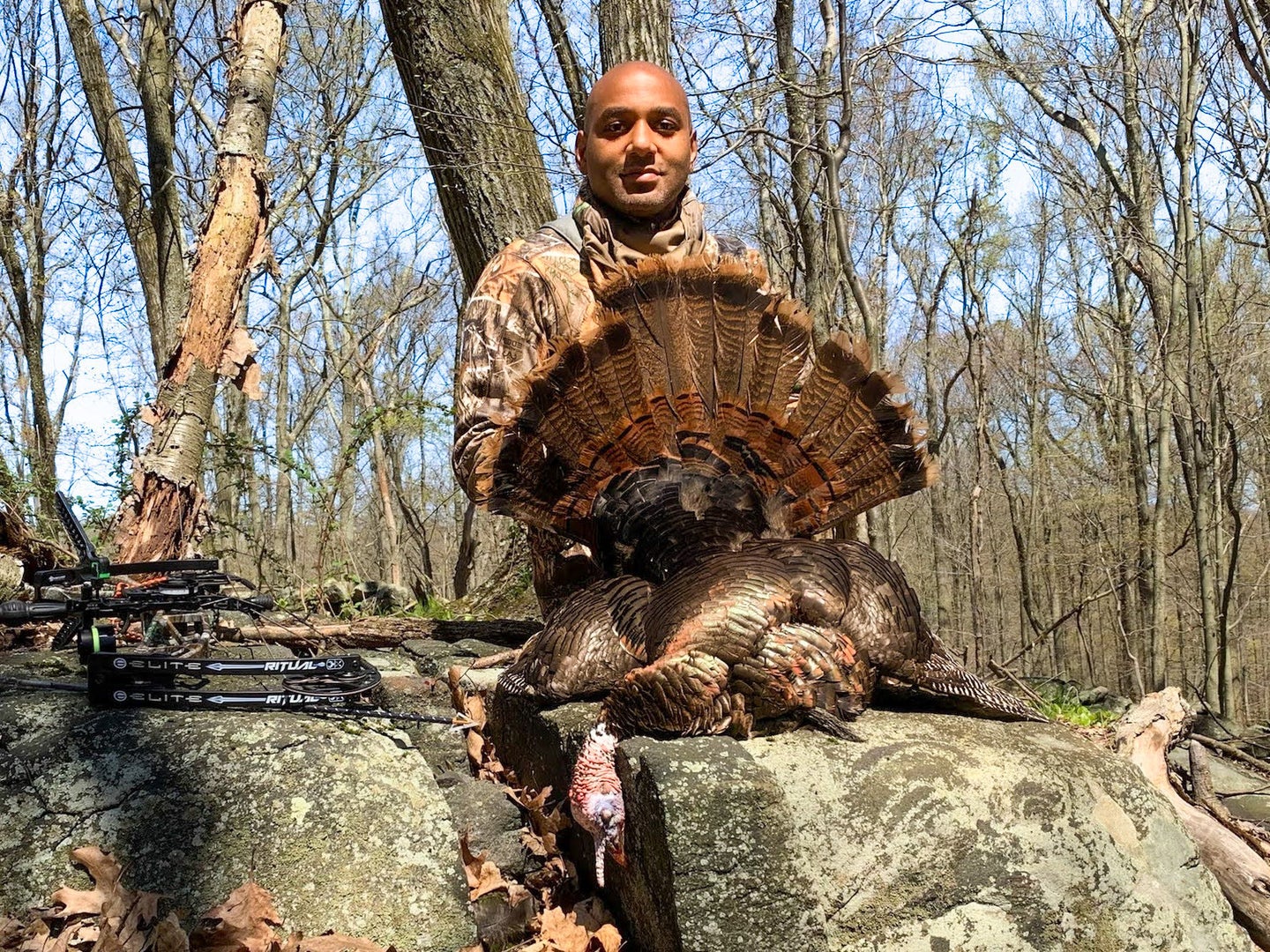 The author with the jake that got him hooked on hunting. Courtesy Cliff Cadet
SHARE

Imagine it’s Saturday night. You and your friends are dressed to the nines. All of you spent a good amount of time getting ready, strutting in front of the mirror. You smell good. You look good. Most importantly, you feel good. You’re going to hit the bars, with one goal in mind: to snag the hottest guy or gal on the dance floor. If you’ve planned things properly, your girlfriends are ready to make up an excuse for you if the wrong guy starts talking your ear off. Or maybe your buddy is ready to play Goose to your Maverick if a lady’s pal just won’t let you bring your A-game.

Okay, now imagine that I’m not talking about hitting the club. I’m really talking about turkeys. Because it turns out spring turkey season is just like a night on the town. It will require strategy, and maybe a wingman. And it’ll be a whole lot of fun.

New York’s turkey opener on May 1 will mark my third turkey season. And to say I’m hyped about it is an understatement. I’m 45 years old and married with children. I am so far removed from enjoying a night out on the town with the guys that it’s best not to think about it. And that’s why I enjoy turkey hunting so much. It really brings back the thrill of “the chase” in a way that deer hunting doesn’t.

Read Next: Things New Yorkers Say When They Find Out I’m a Hunter

Now, I know turkey hunting can be difficult. But if you’re looking to mentor a new adult hunter, turkey hunting is definitely the way to go. Don’t get me wrong. Deer hunting is awesome. There’s a lot to learn and there’s fun to be had. But turkey hunting is a whole different monster, and one that can easily get a new hunter hooked. Hear me out.

Turkeys Are in Your League

My very first hunt was a deer hunt. I had no clue what I was doing. I didn’t shoot anything. Still, I enjoyed the experience of being out in the woods. Before the season began, though, I had admitted to friends and family that I didn’t know if I would be able to take the shot. I’m serious. At the time, if a deer made it within 20 yards of me, I truly couldn’t tell you if I’d be able to draw my bow and let the arrow fly. I was so caught up in learning about whitetail deer, their habitat, and perfecting my archery skills, I hadn’t even contemplated whether I’d be able to take the life of an animal or not.

The following spring turkey season was coming fast, and I was lucky enough to gain a mentor in my buddy Anthony. I was excited. But most importantly, I felt confident that I could take the shot. The idea of harvesting a turkey wasn’t an ethical dilemma for me. I mean…who’s not familiar with turkeys? Some folks see deer and immediately think of Bambi. But turkeys? We carve them up on our major holidays and eat overpriced drumsticks while strolling through our favorite theme parks. At the end of the day, it might be easier for a new hunter to pull the trigger on a familiar turkey than a cute, furry deer. That rookie hunter can easily make the connection between seeing a bird afield and escorting it to the dinner table.

During my first turkey season two years ago, Anthony and I hiked six miles and visited four different public spots, and it all culminated in a chance encounter with three jakes. I was able to seal the deal with an archery shot where I had to maneuver around my mentor AND shoot over a low rock wall. But I did it and it’s my best shot to date. (I brag about it all the time.)

With deer hunting, there’s a lot of pre-hunt work that must happen for success to be even a remote possibility. Because unless you spot-and-stalk, deer hunting requires a lot of sitting, waiting, and hoping that all the scouting and strategizing you’ve put in comes to fruition. With turkey hunting, if you’ve got an idea of where they’re hanging out, you can go to them. Think about it. When you hit a club where the ladies aren’t interested or the guys aren’t appealing, what do you do? You ditch it and head to the next hot spot. The same applies to turkeys. You could hit a half-dozen spots in one hunt if you wanted to, but you can’t exactly move your treestand six times in one morning. That run-and-gun action keeps new hunters on their toes and in the game.

Remember that scene from Jerry Maguire—the one where Tom Cruise realizes how much he loves Renee Zellweger and to runs to her house and gives this heart felt speech? Don’t guys in movies like that know just what to say at exactly the right time? Well, that’s what turkey calling is like. The way I see it, calling for turkeys is the best part of turkey hunting. It’s really all about knowing what to say at the right time.

And that very thing proposed some initial challenges for me. Until recently, I didn’t know that female turkeys often travel to male turkeys when the males gobble, or that the hens and toms meet in between. So, how do you get a tom to come to you when he’s expecting all the ladies to come to him?

Turkey calling is an art. Just like there’s a dance for every song, there’s a call for every situation. You’re downright challenging nature when you’re trying to get a tom to come all the way to you. So, you’ve got to practice—practice being the turkey, that is. Are you really going to hit the dance floor doing the running man (or whatever dance kids are doing these days) without knowing if you’re actually good at it? I hope not.

You Can “Hunt” All Year Long

I’m not sure about your state. But in New York, there are two turkey seasons: One in the spring, the other in the fall. But if you’re really into it, turkey hunting (and preparing for it) is a year-round activity. There is so much to do, and that makes it all the more fun. From learning to set decoys to practicing your turkey calls, there’s so much to do year-round—and that makes it all the more fun. If turkey hunting is all the hunting you do, you’ve got more than enough to keep you busy. Did you know there are even contests dedicated to how well you turkey call? I’m a competitive person. So, you know I’m all-in.

Here’s another way to think about it: My first turkey hunt is where I experienced my only hunting kill to date. It was two years ago, and it was so awesome, I’m still bragging about it. (Have I mentioned I killed a turkey?) That one hunt has sustained me through seasons where I didn’t fill a tag. It turned me into a hunter.

Now it’s your turn. Get out there and strut your stuff.