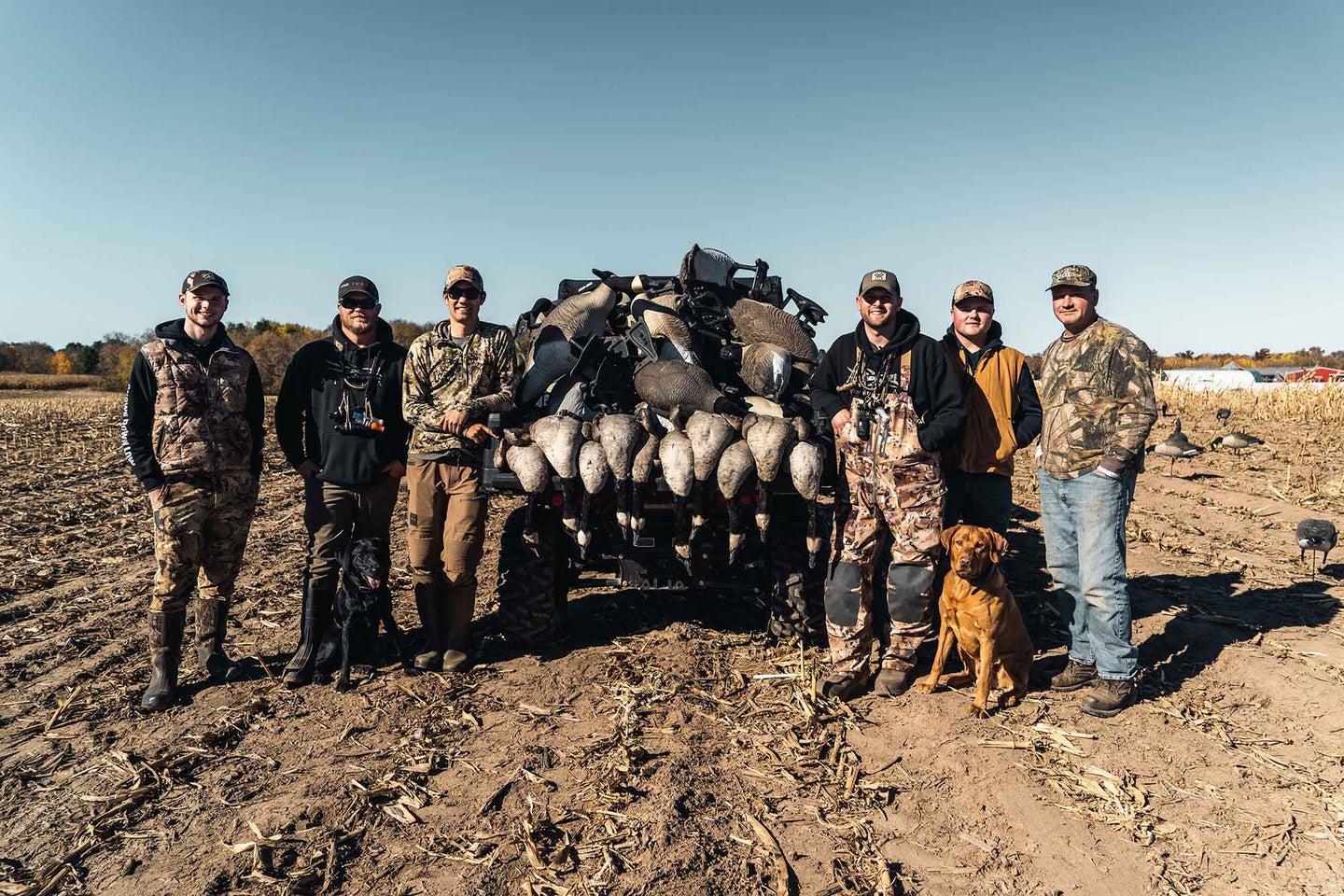 Cole Fabro (second from right) and his crew of buddies after a successful hunt. Adam DeMarch
SHARE

A flock of geese is swinging around behind us and I can just hear their honks and clucks over the rushing wind and hiss of propane heaters. My buddy Todd Gifford peeks out the back of the homemade blind and whisper-yells, “There’s a whole mob of them, they’re coming!”

A big group of 30-plus birds slide off to our right, but a pair breaks off from behind the flock and locks onto our spread. When they close to within 30 yards, Todd and our other buddy Markie pop up and drop one of the pair. “Yeah, baby. Christmas in November!” Todd yells, any hint of a whisper now gone with the wind. This was our first hunt, and first bird of our unofficial winter goose season.

If the weather stays cold and the snow sticks around, Todd and his buddies will be out here every week until New Years. They hunt how pretty much everyone hunted geese 30 years ago. They build blinds in fencerows, roll out a big decoy spread, pack along heaters, and plenty of food…and then they wait. Their goal is to run traffic on geese that are migrating through the area—along the Minnesota-Wisconsin state line.

Sometimes the birds arrive right away in the morning. Sometimes the guys won’t fire a shot until the afternoon. But there’s very rarely a day when at least a few geese don’t drop into the spread. We’re only 35 minutes outside of the Twin Cities, and it’s not lost on me how lucky we are to have this kind of hunt so close to a major metropolitan area. Lots of folks see the geese lounging in parks or loitering on golf courses as nothing more than giant pigeons. But goose hunters see the birds for what they really are: hearty survivors who migrate thousands of miles through the most brutal winter conditions. In our modern agricultural and suburban society, they’re still icons of the wild.

Todd’s strategy is a lot different than today’s more common approach to Canada goose hunting, which calls for lots of scouting, hiding in layout blinds, and hunting big feeds. This is how Todd’s buddy Cole Fabro hunts with his own crew in this same region. Their goal is to work as a team to find the best feeds and hunt the X. I got to hunt with Cole and his crew earlier this season and watched them run like a well-oiled machine. Setting a big spread (30-dozen full bodies), hiding layout blinds, and then picking it all up after the hunt is over takes a lot of teamwork.

Both Todd and Cole’s strategies are effective for killing geese where we live—the corridor cut by the St. Croix River and Mississippi River at the heart of the Mississippi Flyway, which supports some 1.7 million geese. But to be successful with either strategy, you’ve got to understand the birds’ behavior, the habitat they’re using, and the landowners who control most of that habitat.

The Lay of the Land

Fall turns to winter quickly here. The little ponds and lakes that geese use for roosting and loafing can freeze overnight. When that happens, geese hit the rivers, which don’t freeze until much later in the winter. Then they typically leave the rivers to feed in agricultural fields. This is a similar pattern for winter geese all over the country.

You can hunt geese on the water but in my experience, it’s really hard to consistently pin down a good water shoot late in the season. Geese are ultra-wary on the rivers. They often fly at irregular times. And here along the St. Croix and Mississippi, there are so many pools, pockets, and sand bars for geese, it’s nearly impossible to pattern them.

That means your best bet is to target them where they feed. Ideally, you’ll have geese coming to a field for a day, or two in a row with a consistent weather forecast. A sharp change in the weather will usually change their feeding patterns. In general, cold, windy days will get geese moving to feed and flying low. However, I have seen geese reluctant to leave their roosts on super-cold days with sub-zero temps. At these times, geese will wait for the warmest part of the day to feed.

If you’re not hunting a feed, you can have success trafficking in migrating geese—especially with birds that are new to the area. This takes an ultra-realistic decoy spread and good calling. You need to convince the migrating birds that it’s worth coming down to feed. (In contrast, when you’re hunting the X, they’re already set on coming to you). Most folks think that trafficking birds requires a massive decoy spread (think 300-plus decoys) but that’s not always the case. Todd and I have had successful hunts where we ran only 5-dozen full bodies. The key to making up for the lack of numbers is to make the spread look realistic. That means no crappy old shells, or silhouettes that glare in the sunshine. Also, a few inches of snow can help a small spread really stand out in a field. You want the birds to be able to spot your decoys from as far away as possible.

The real key to success for hunting field geese here—or anywhere else—is to forge good relationships with the landowners. It doesn’t matter if you’ve got thousands of geese coming through your area if you can’t get permission to hunt them. Both Cole and Todd are experts at dealing with landowners and are successful season after season because of it.

Remember that the landowner is doing you a favor by letting you hunt their ground. If you rut up their fields, shoot too close to their barn (or their neighbor’s property), or cause any general disturbance for them, you could be out of a place to hunt quickly. What’s more, you could also prevent other hunters from being able to get permission on that farm in the future.

With that in mind, there are a few basic rules all of us goose hunters should follow. Pick up your spent shells, don’t ask for permission during dinner time or too late at night, and don’t cause trouble with other hunters that the landowner will have to deal with. If a farmer gives permission to multiple groups, those groups should hunt together or let the first group to arrive have the field.

And above all: Do not tear up the farmer’s fields or roads. This is a major issue during the late fall to early winter when the ground is thawing and freezing. Fields might be frozen in the morning and then become a sloppy mess by midday. We’ve been using the Can-Am Defender UTV on our field hunts because it’s lighter and has less impact than a couple pickup trucks. We use the Defender to ferry gear and hunters to our hunting spots and prevent trucks from rutting up the fields. The farmers seem to appreciate this since many of them have UTVs themselves, and are used to driving them around the farm.

When the season is over, dropping off a Christmas gift (or a case of beer) also goes a long way with landowners. It shows that you appreciate them, and that you’re not just using them to rack up a couple limits. These folks are your neighbors and, someday, could be your friends. So treat them like it.

As for me, I’ll be spending much of my December with my dog and shotgun in one of Todd’s blinds, waiting for more giant geese to decoy.