Deer Hunting Every Day in the Suburbs of Virginia

For a pair of diehard bowhunters, nothing—not urban sprawl or even a pandemic—can keep them out of the woods 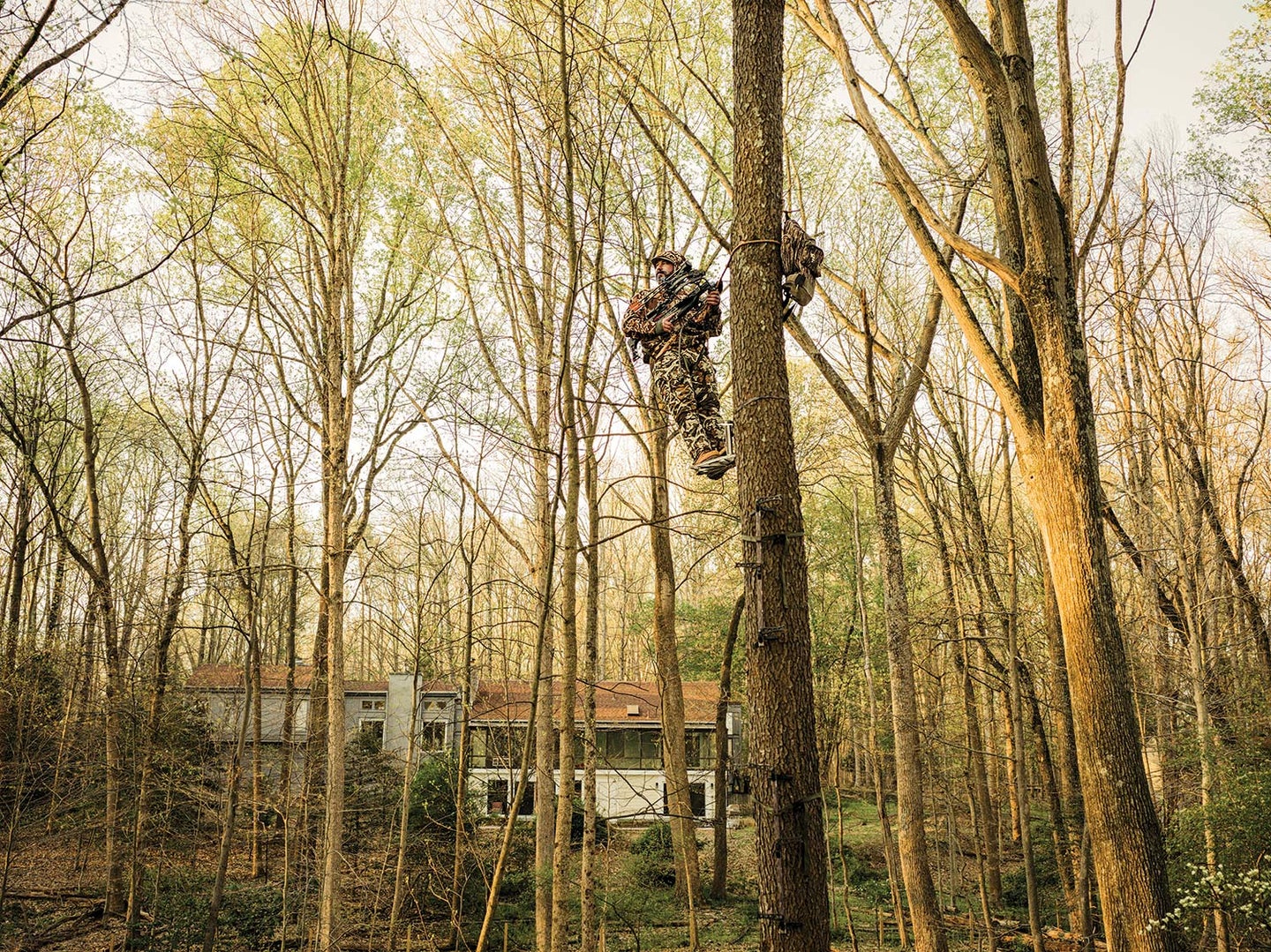 Exploding whitetail herds in suburban Virginia have created a different kind of deer season. And for a pair of diehard local bowhunters, nothing—not urban sprawl or even a pandemic—can keep them out of the woods. Greg Kahn
SHARE

Deer hunting year-round is a pipe dream in most places. No matter how hard you hunt or how many states you hit, you have to hang it up eventually. But in the manicured backyards of Virginia’s multimillion-dollar neighborhoods, it’s deer season every day.

Taylor Chamberlin discovered this almost by accident. After teaching himself to bowhunt in college, the Northern Virginia native moved back home to join the family real estate business and start his own family. Living in a rural area wasn’t an option. Eventually, he found a military base that allowed hunting, even though deer were scarce. On the long drives there and back, he’d spot whitetails browsing through neighborhoods, nibbling on expensive landscaping. “I remember thinking, Why am I driving past all these deer to find deer?” Chamberlin says.

When a friend introduced him to Billy ­Phillips, a local landscaper and experienced suburban hunter, Chamberlin pivoted, adapting quickly to the challenges of hunting the burbs. And there are challenges: Despite derision that suburban whitetails are “tame deer,” both bowhunters say it’s harder to kill one in a backyard than in farm country.

“So many factors are out of your control on an urban hunt. And you don’t know what was happening on that property earlier in the day. Was the homeowner on his deck, talking on the phone? Kids running through the yard?” says Chamberlin. “Deer are hypersensitive to human interactions. They know where humans go and where humans don’t. When you cross that bubble, deer respond immediately.” 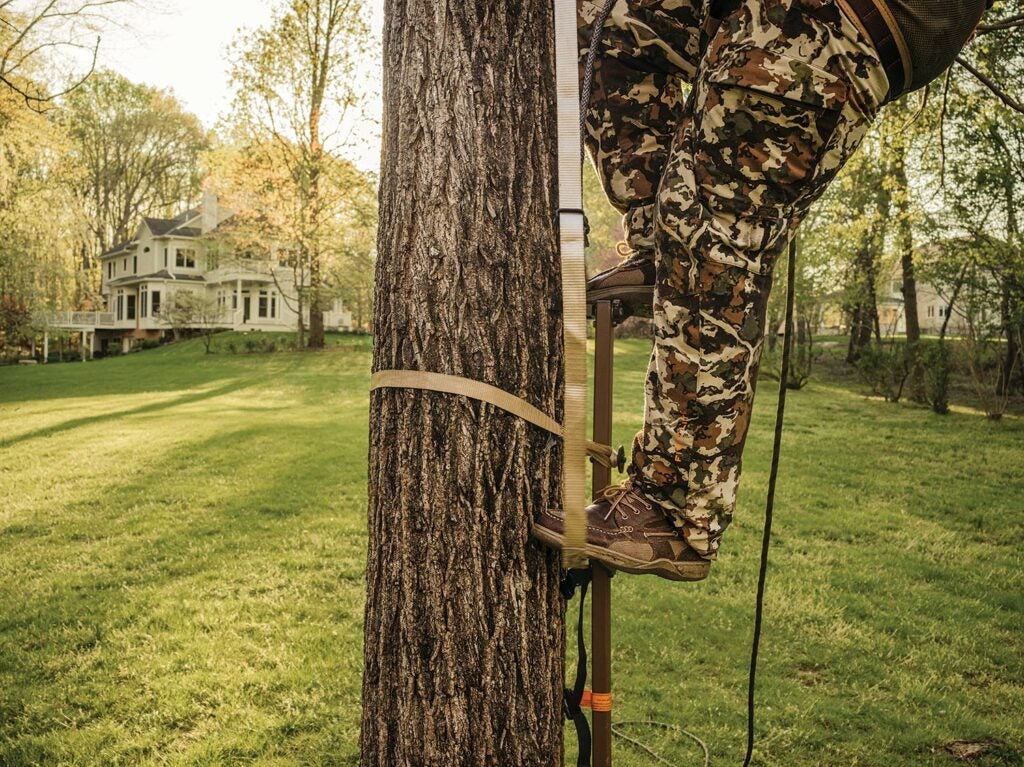 Ladder stands aren’t an option when you property-hop, and mobility is essential once deer start getting wise. “We might shoot five does out of five trees on the same property,” Phillips says. “It doesn’t take long for them to change their ways.”

On the properties where Chamberlin and Phillips have been hunting for years, they’ve noticed a dip in deer numbers. Which is exactly what they’re after. Hunting has helped stabilize Virginia’s high deer populations in the last decade, but certain urban and suburban ­areas are above carrying capacity. Hungry deer are turning to nonpreferred foods, and that’s when Phillips’ landscaping clients ask if he can help with their pest problem.

Chamberlin initially got access on a handful of properties by persuading his grandmother to ask her bridge club for permission. Now he can’t keep track of the hundreds of properties they have access to, which range from half-acre woodlots to sprawling estates. Homeowners call weekly, offering a place to hunt in exchange for herd management. Though the guys provide a service and refer to these folks as their clients, they’ve never charged anyone a cent. “We’re hunters,” says Phillips, who hunts 200-plus days a year and kills so many deer he doesn’t like putting a number to it. Every deer is eaten by landowners and the guys’ families, or donated to the hungry. “Granted, we’re hunting a lot, but each hunt is still an adrenaline rush. If we had to turn it into a job, I don’t know if I would enjoy it as much as I do.” 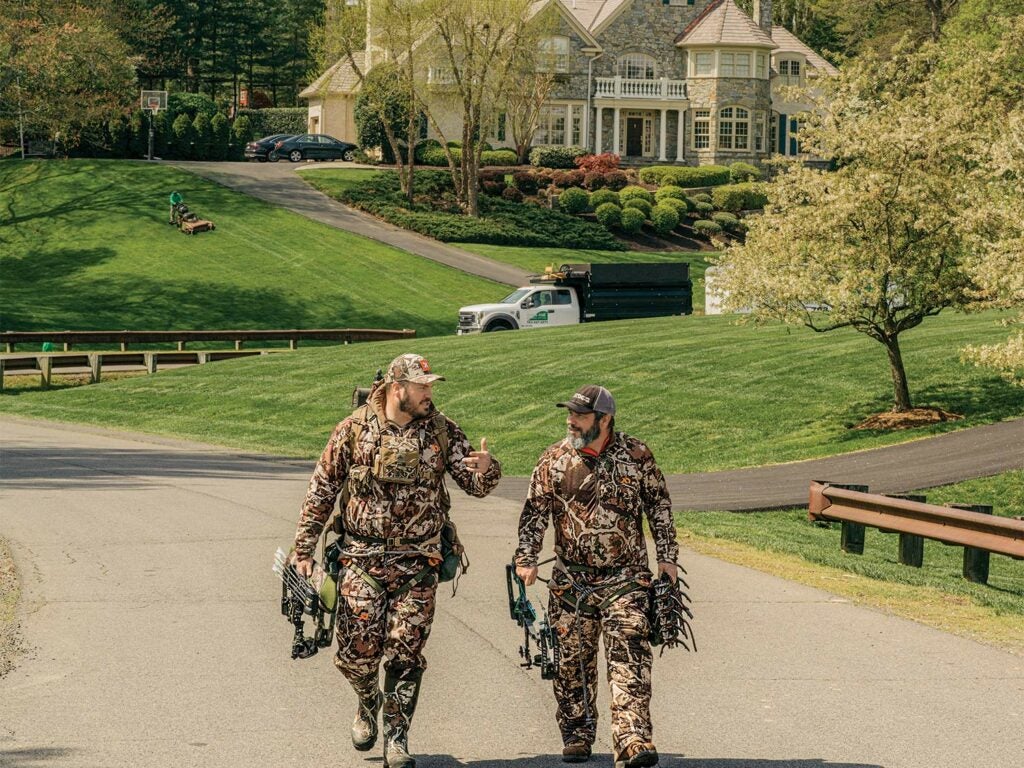 Virginia’s urban bow season runs from September through April in the northern counties where Chamberlin (left) and Phillips operate. Special damage control permits and management tags allow them to hunt all summer long.

Plus, the guys don’t want to stick to a single property, obligated to defend one homeowner’s hostas. “We follow the deer,” Chamberlin says. “We’re not just going to sit in one spot and hope the deer come by. We’re trying to proactively hunt, and the deer are constantly on the move. They’re so overpopulated, and there are so few pockets of total seclusion for them, that they’re constantly getting bumped around.”

Suburban saddle hunting isn’t the sole ­future of deer hunting in America, but it’s certainly one form that we’re going to see more often. In much of whitetail country, it’s hard to get permission on private land without paying expensive lease rates, and quality public ground can be hard to find in the East and ­Midwest. In Virginia, for instance, 89 percent of the state’s huntable deer habitat is on private land. But the suburbs hold plenty of deer, and landowners are inviting hunters in.

“Every time we climb a tree, we’re planning to shoot something,” Chamberlin says. “It’s really a chess match. And it’s a very small chessboard.”

To learn more about how Taylor and Billy hunt the suburbs, check out their YouTube channel or hunturban.co. 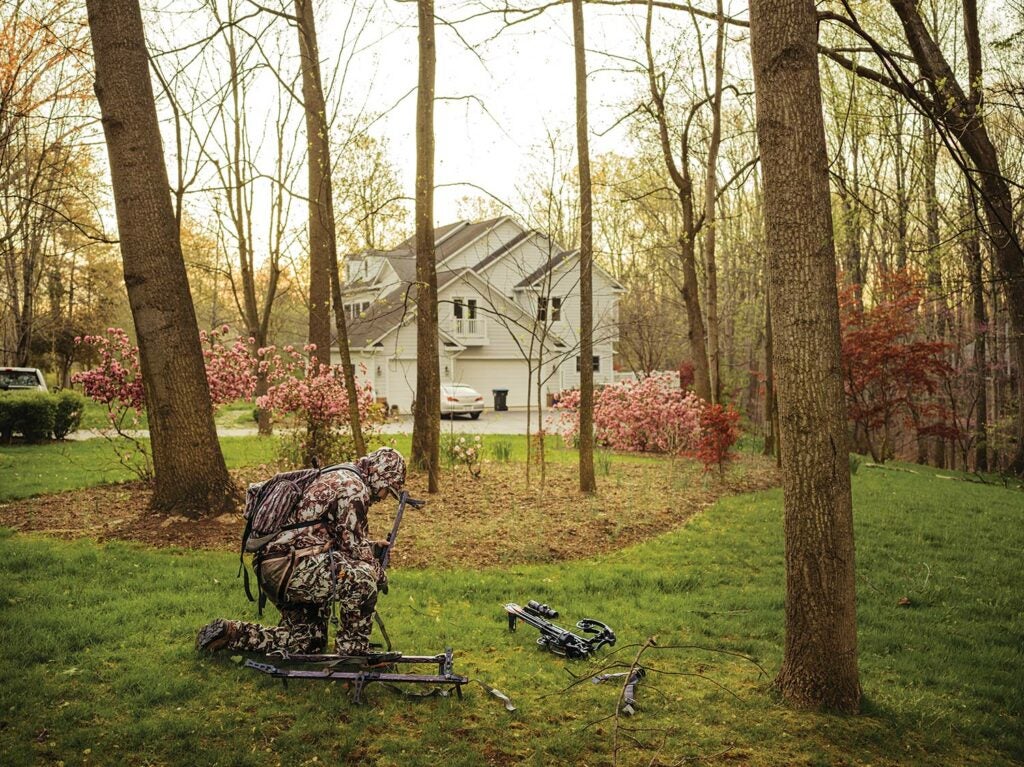 Rural hunters might be surprised at how close to houses Chamberlin and Phillips set up, but there’s no minimum legal requirement. They’ll hunt wherever they can kill deer. That’s led to some strange setups, including on backyard playsets. 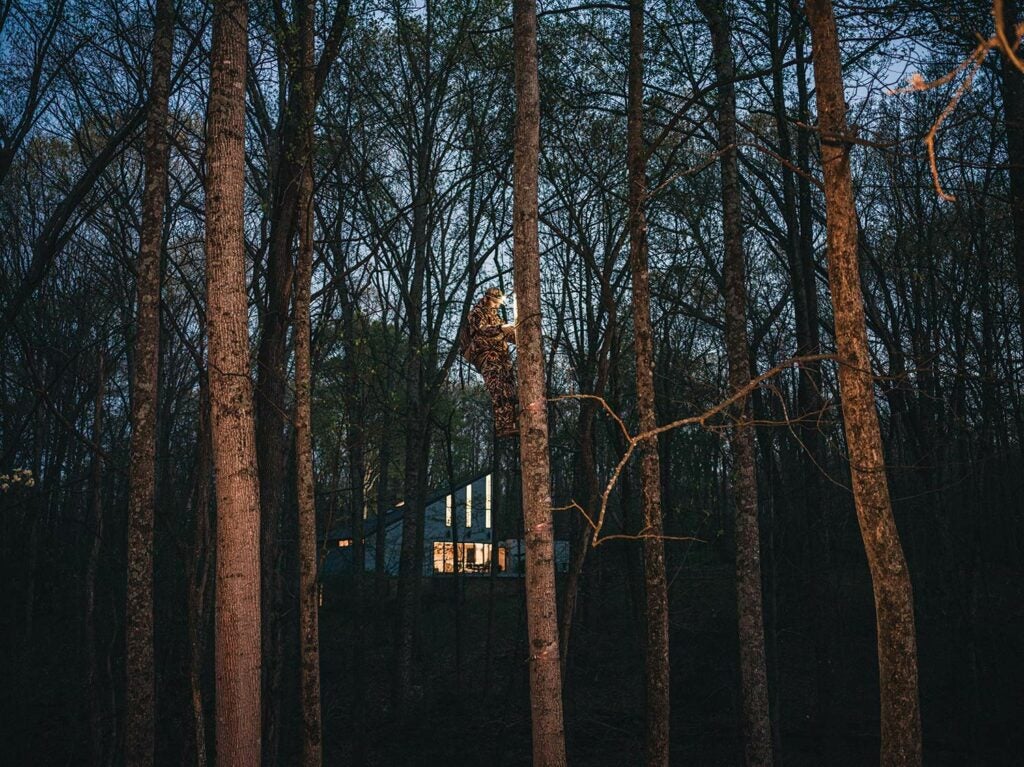 Good climbing trees are scarce in small yards, which is why Phillips has been killing deer from a harness since 2006. A saddle can turn a 4-inch trunk into a viable tree, and its range of motion lets him hide behind a trunk, then move into position. 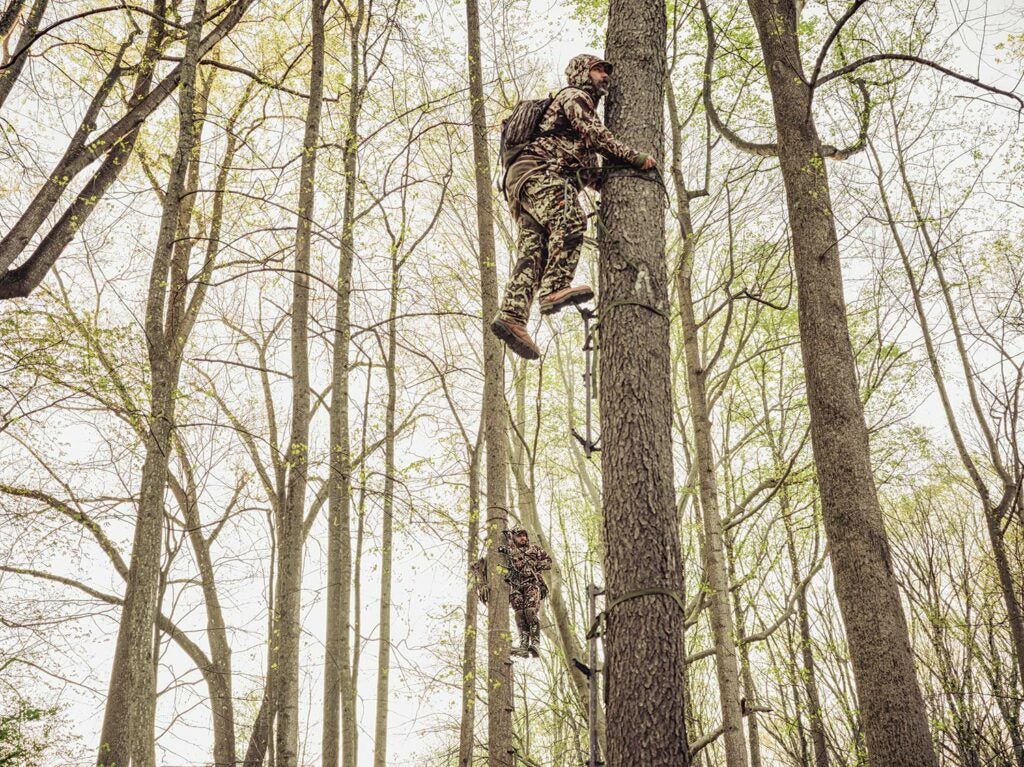 It’s not unusual for the guys to hunt together, especially if a property holds lots of deer. They work in tandem to knock on doors, donate venison, and teach new hunters—many of whom are curious landowners who want to try it for themselves. 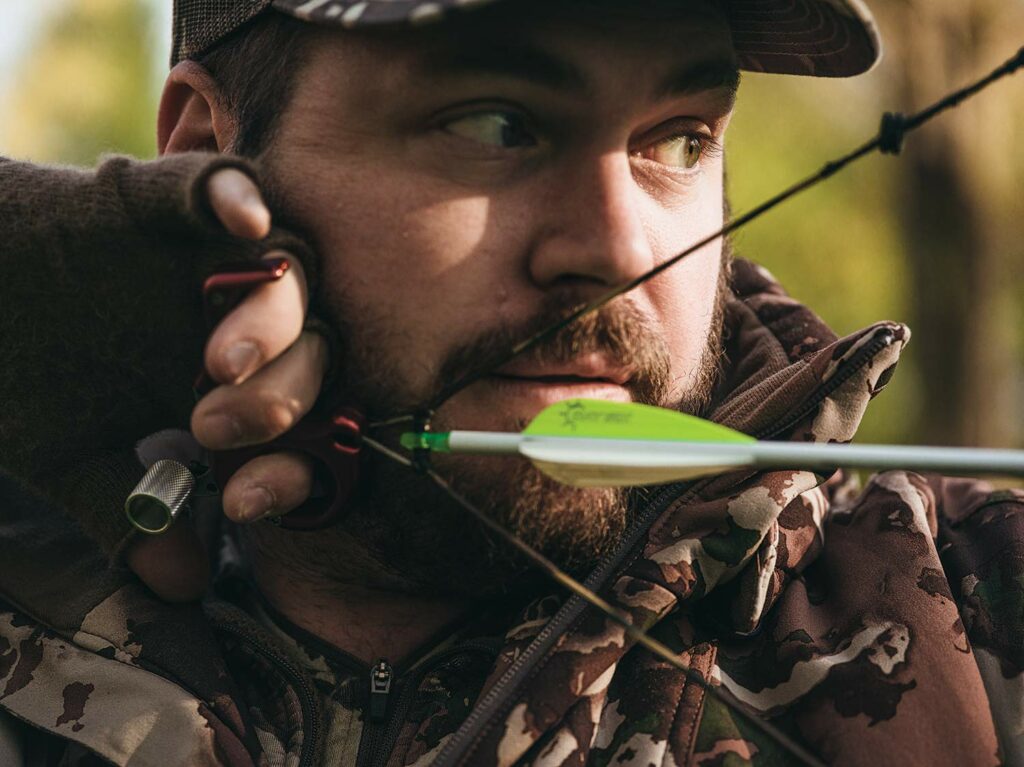 To minimize tracking and interactions with neighbors, Chamberlin usually limits himself to 20-yard shots. “There are more deer in a season that Billy and I don’t shoot because it wasn’t absolutely perfect than some people will see in a year.” 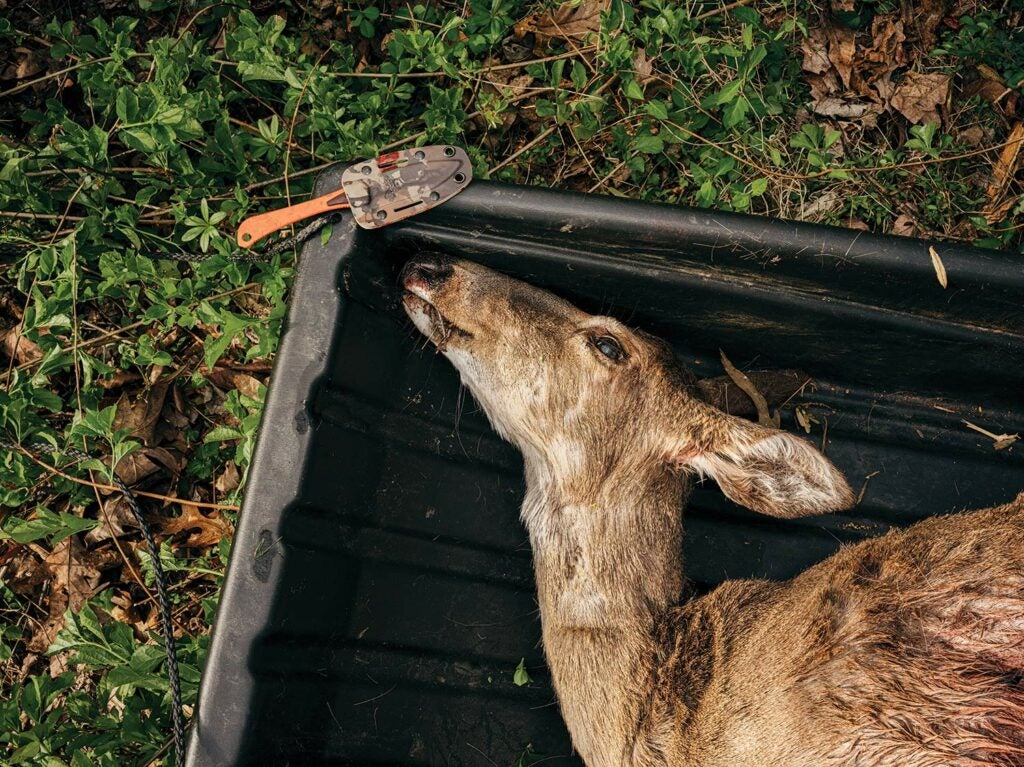 Discretion is critical when cleaning and dragging out deer. Eventually the guys learned to blend in (p. 7). Paradoxically, that requires ditching camo: They keep street clothes in their cars for when they have to ask permission to recover a deer. 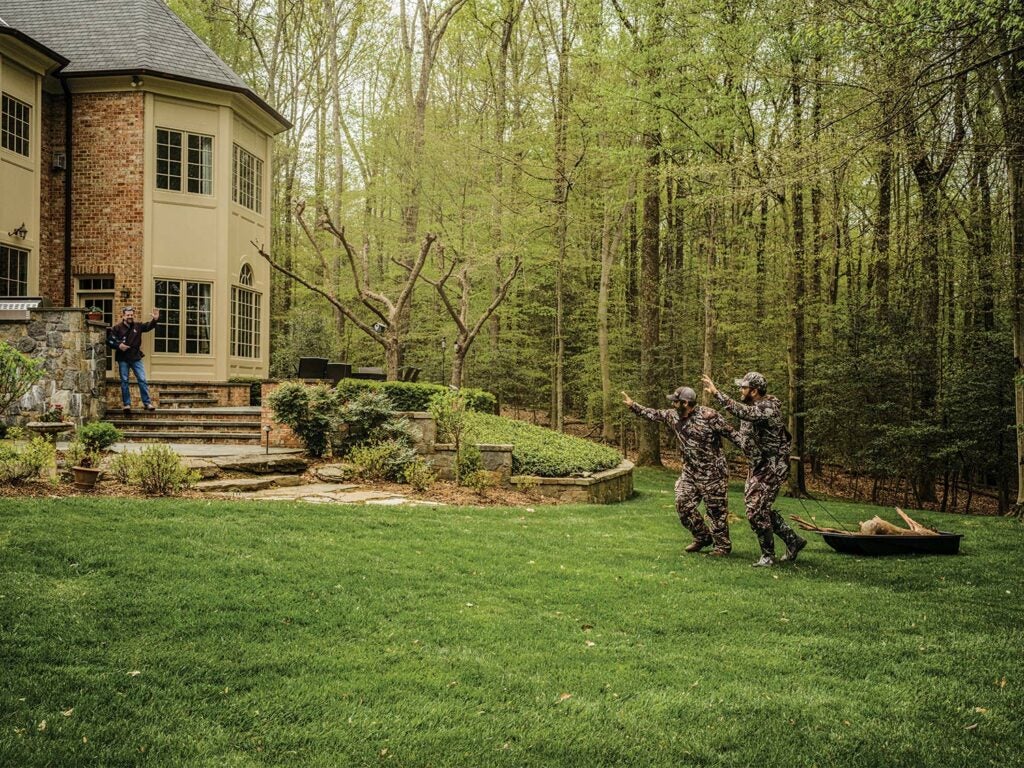 Chamberlin and Phillips interact with neighboring landowners—and it’s usually a positive encounter—about every third recovery. In their collective 27 years of doing this, they’ve each been denied permission to retrieve a deer only once.