The Top 10 Best Handguns for Carrying (Plus Two Extras, Just in Case) 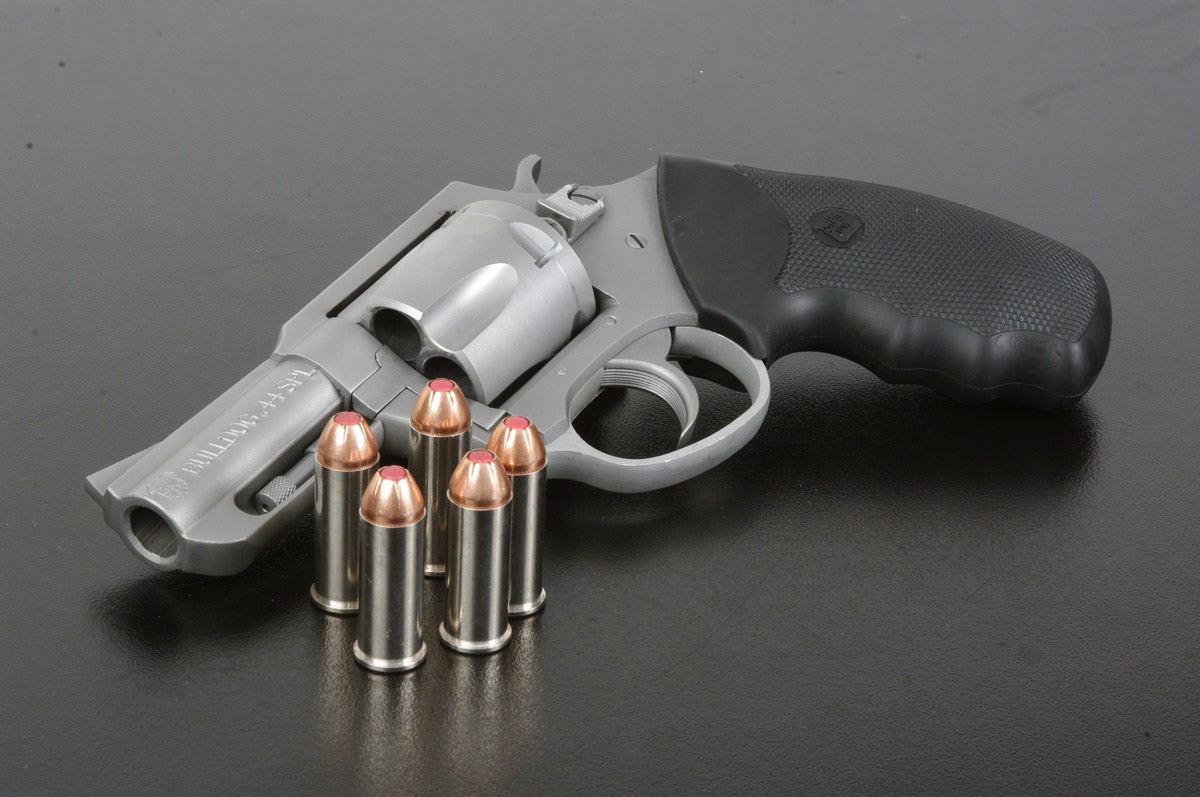 Opinions about carry guns are like armpits: Everybody has them and they all stink except mine. The argument as to the best handgun for carrying (and cartridge to go with it) has lit up the internet since Al Gore invented it, and it’s not likely to be settled soon. That is, unless everyone agrees I am right. While the choices are fluid, here are my top 10 choices for carry guns as of today.

Why a Revolver Is Still a Smart Choice for Personal Defense

Before you assume semi-auto is the only way to go, consider the personal defense revolver.

In today’s world of high-capacity, polymer-frame, semi-auto pistols, we often forget about the original repeating handgun. While the roots of the revolver go back to the revolving arquebus, produced by Hans Stopler of Nuremberg in 1597, it wasn’t until 1836 that Sam Colt figured out how to make it work reliably. Once Colt started making revolvers, the world of repeating handguns changed forever.

Whether you’re in the field hunting, hiking, or exploring, or in any wilderness setting, the revolver is the top choice in a handgun. For personal defense, the double-action revolver may be a bit less popular nowadays, but it’s every bit as good a choice as it ever was.

Reliability and Versatility of the Best Revolvers

One big upside of a revolver is that it is almost totally reliable. A quality revolver that is maintained and fed a proper diet simply does not jam. In the event of a misfire, another pull of the trigger lines up a fresh cartridge with the barrel.

Revolvers can be chambered for much more powerful cartridges than semi-auto handguns, which makes them the clear choice in a wilderness setting, where the predators are on four legs and can be big, tough, and tenacious.

From deep-cover concealed-carry to defense against the world’s largest predators, the wheel gun still shines bright. It is our oldest successful repeating handgun design, and continues to be a great choice for personal protection.

While the choices are endless, here are my top 10 choices for carry guns. 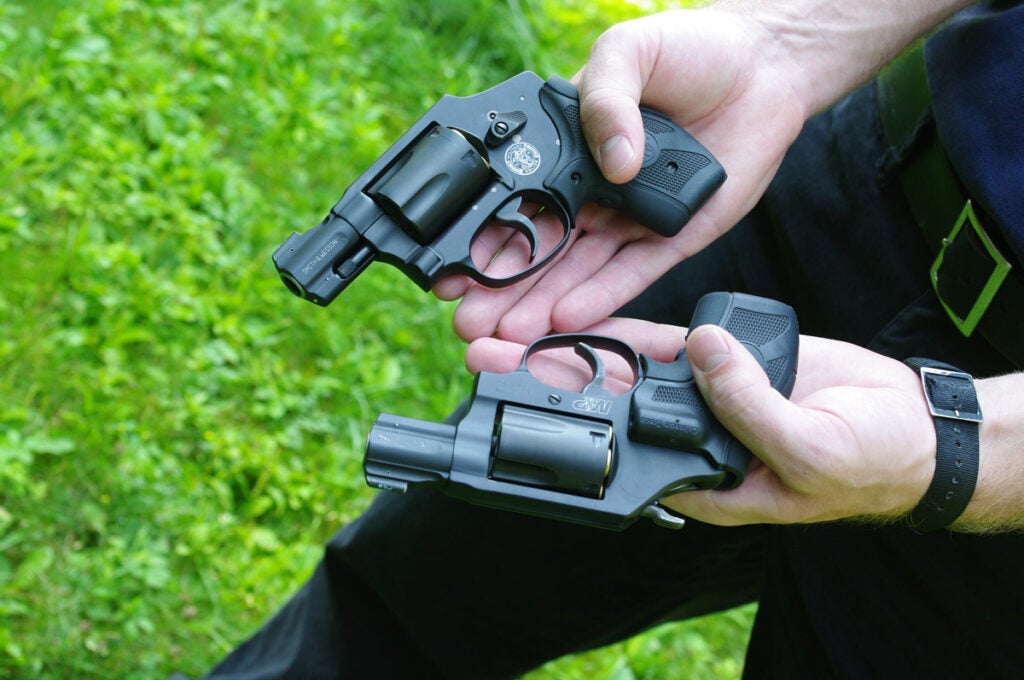 The J-Frame M&P Scandium alloy frame is available with an external hammer or in double-action only with no hammer.

It’s said that guns guys talk about 1911s, shoot Glocks, and carry a J-Frame. The current group-think opinion on the Internet is that this handgun is a bad choice. Sorry, but I don’t follow the herd. Want the truth? More often than not I grab my Model 340 S&W in .357 Magnum when I am heading out the door.

I carry it in a Blackhawk pocket holster. Yeah, the one the Internet Tactards say will get you killed on the street. It’s easy to conceal and simple to carry. That means I’ll have the revolver with me, which counts for a lot with carry guns. A surprising number of the hardcore shooters I know do pretty much the same thing. 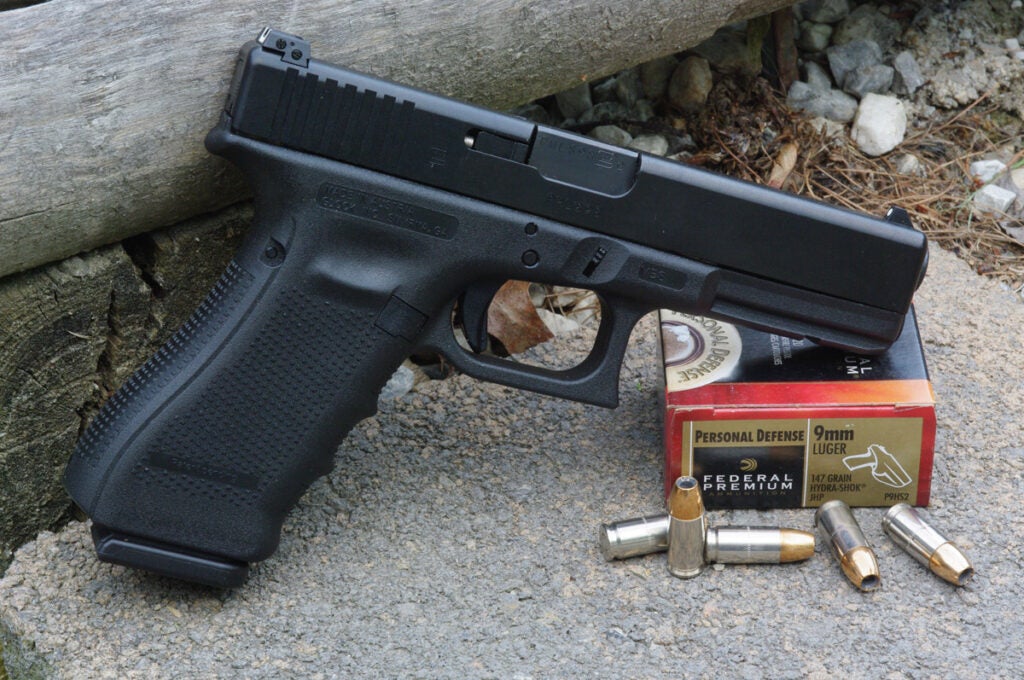 Created by a 50-year-old manager for a car radiator factory in Austria, this pistol shocked the world. The simple gun had only 34 parts. Everything except the barrel, slide and a few small internal parts and springs was made of plastic. Even the magazine was plastic.

The gun was cheap to manufacture, priced well below the competition, and it changed the handgun world. The gun holds eighteen 9mm cartridges and became the darling of the “I need a lot of capacity” crowd. The Glock G17 is the carry gun of choice for millions. 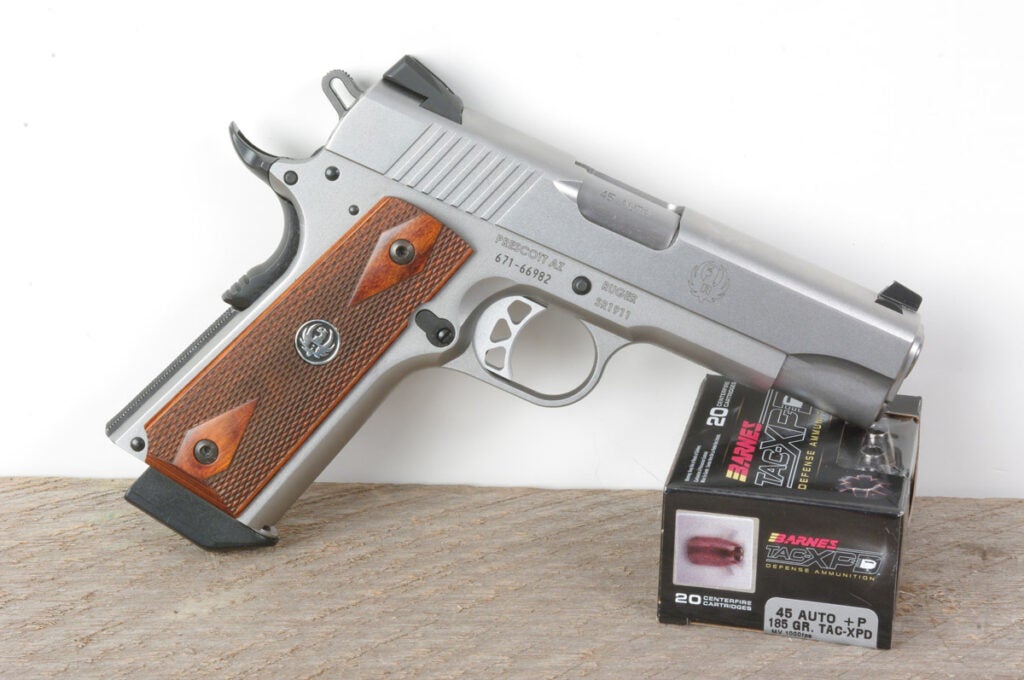 John Browning’s masterpiece is more than 100 years old and remains one of the most popular fighting pistol designs in the world. Many experienced shooters prefer it to the plastic Tupperware guns that dominate the market, partly because they still believe that physics apply and a big cartridge hits harder.

They also know that it’s a sin to chamber a 1911 in anything other than .45 ACP. The full size 1911 is a bit heavy, the Officer size a bit unreliable; the Commander size is just right. 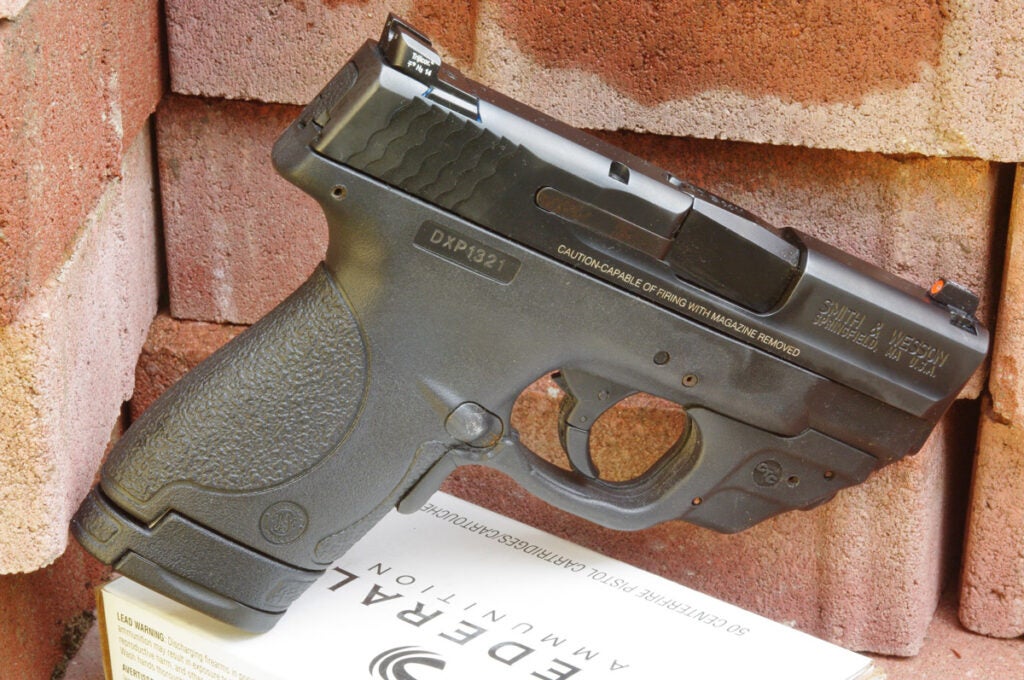 S&W M&P Shield in .40 S&W. The sights are Trijicon HD Night sights and I have a Crimson Trace LaserGuard mounted on the gun.

This gun created an entire new class of handguns, bridging the gap between the micro pistols and the much larger “sub compacts” of the day. It is small, lightweight and easy to carry. Yet, it’s almost as easy to shoot as most full size guns. The Shield is chambered in grown up cartridges like the 9mm and .40 S&W so it provided the best of all worlds. Now that it’s available in .45 ACP, it just might well be the ultimate carry gun.

About the time “shall-issue” concealed carry laws started sweeping the country, the little polymer frame .380 ACP guns became popular. It started with the Kel-Tec P3AT. Ruger announced their LCP in 2008, and with the force of the Ruger marketing machine behind it, the LCP became the most popular handgun in the world for a while.

It went on to launch a revolution of micro .380 handguns. The tiny gun is lightweight, inexpensive and comfortable to carry. The .380 ACP is not a powerhouse, but it’s often enough. 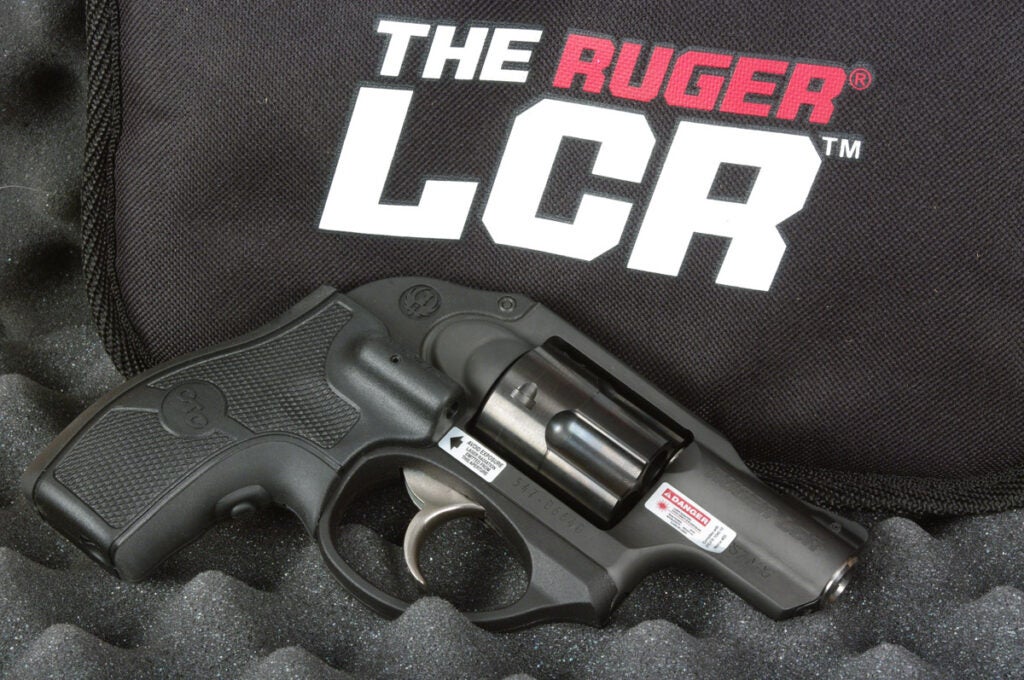 This is the J-Frame for the masses. Ruger developed the use of polymer manufacturing for this handgun and brought the cost down well below the S&W handguns. Like any Ruger, the quality is excellent. The Ruger LCR is a very popular, reasonably priced double-action revolver. This gun makes use of polymer in the frame, which keeps both weight and cost down, yet it can handle a powerful cartridge like the .357 Magnum. It’s offered in a wide range of cartridges, from .22LR to the .357 Magnum. Mine, of course, is in the latter, and it’s held up well to a lot of shooting. It’s a small handgun that is easy to carry, chambered for a very powerful cartridge, and priced so a working man can easily afford it. 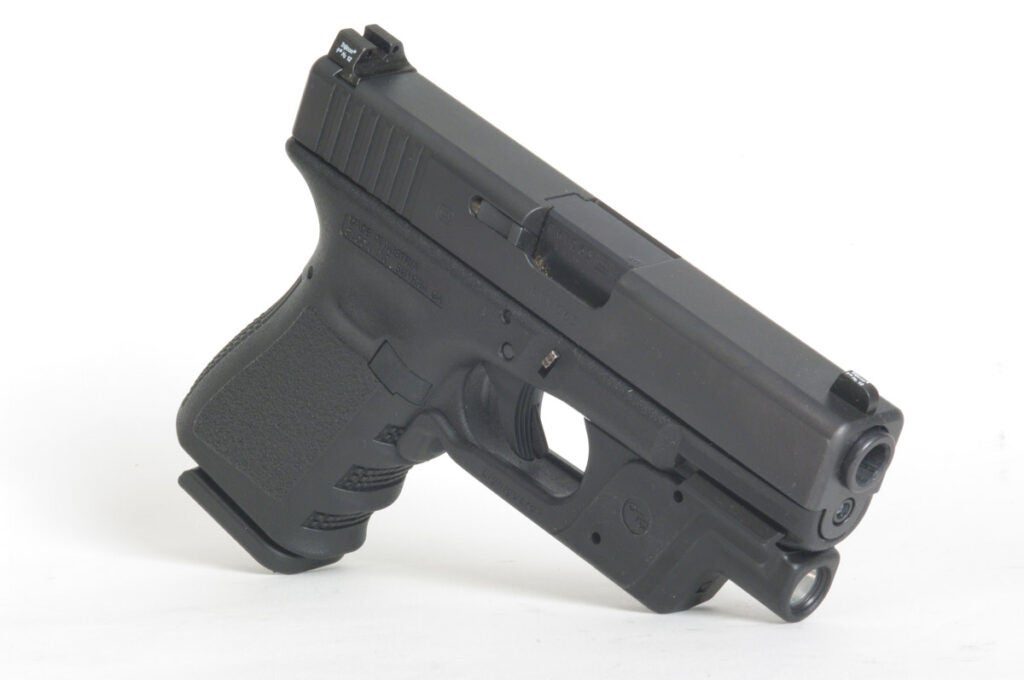 This is Glock’s “Commander” size handgun. Smaller than the full size guns, it makes carry easy without compromising power. The Model G19 in 9mm is probably more popular, but a lot of gun guys still believe in defensive cartridges that start with a four.

The G23 in .40 S&W has a 14 cartridge capacity in a compact package that is comfortable to carry all day. It’s the choice of a lot of savvy gun people for an everyday carry gun. 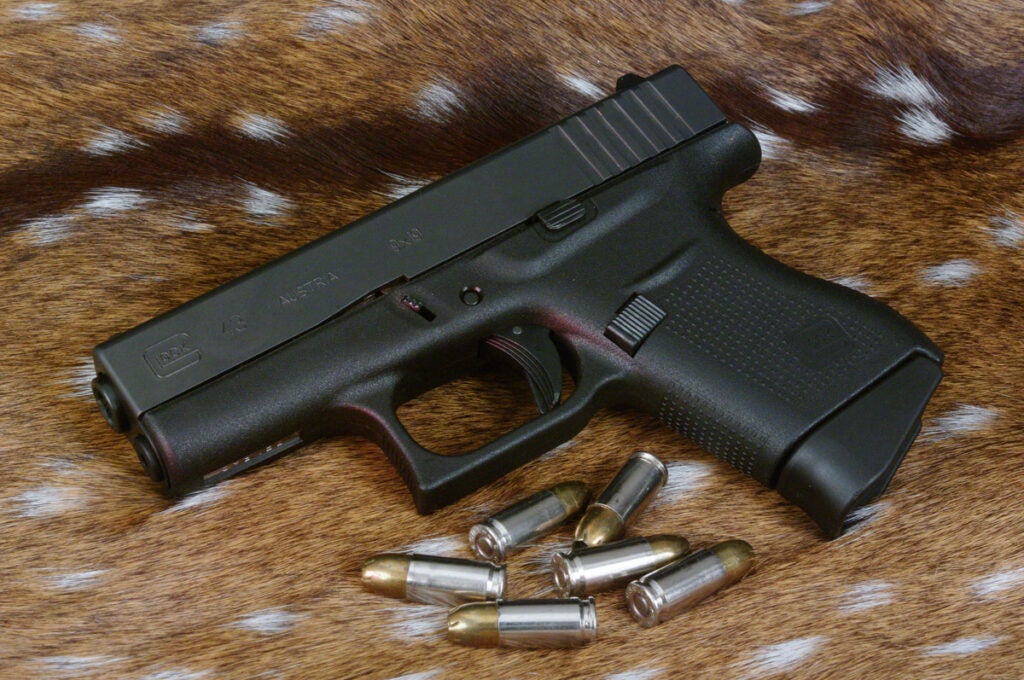 The S&W Shield started a revolution in carry guns, by making a small, compact, lightweight handgun in full size cartridges. When the new category grew too popular to ignore, Glock jumped in with this 9mm handgun. Like all Glocks, it’s reliable to the point of being boring. This small, lightweight handgun holds six in the magazine and one up the pipe for a seven round capacity. 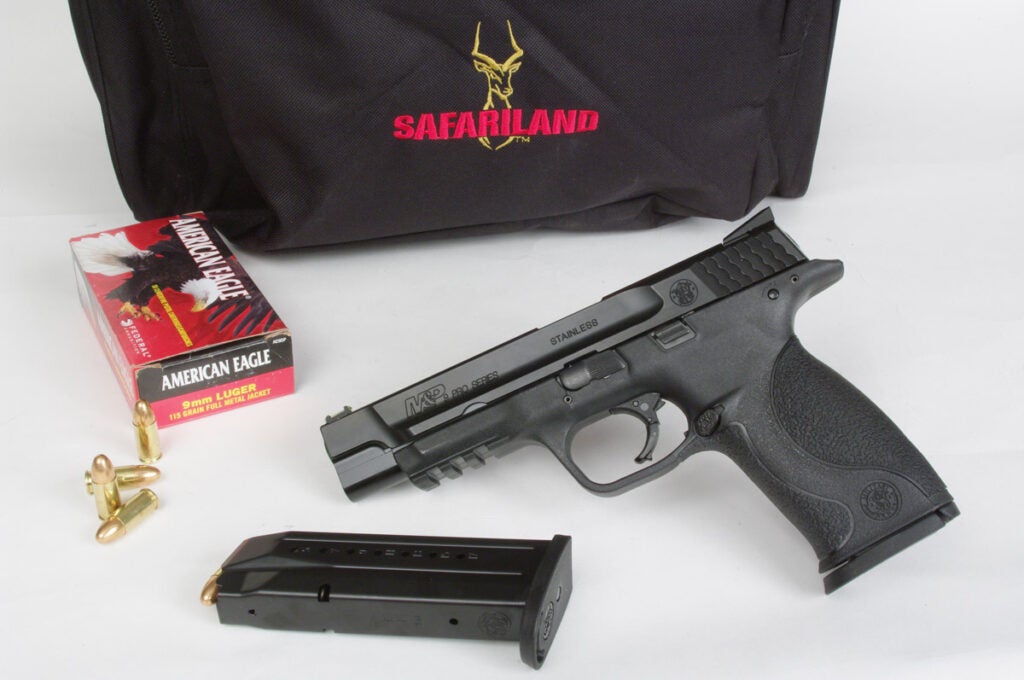 The Smith & Wesson M&P (Military and Police) is probably the second most popular handgun in the polymer-frame, double-stack, striker-fired pistol category. When you consider that the M&P was introduced in 2005 and that Glock had a 20 year head start in the market, running a close second to the Austrian wonder pistols is a pretty remarkable achievement.

There are many features on the M&P that I prefer over the Glock, like the grip angle, trigger and metal magazines. Plastic magazines have a tendency to stick in the magazine well when you try to eject an empty; metal mags behave and fall out. It’s also American made, which counts with a lot of gun buyers. 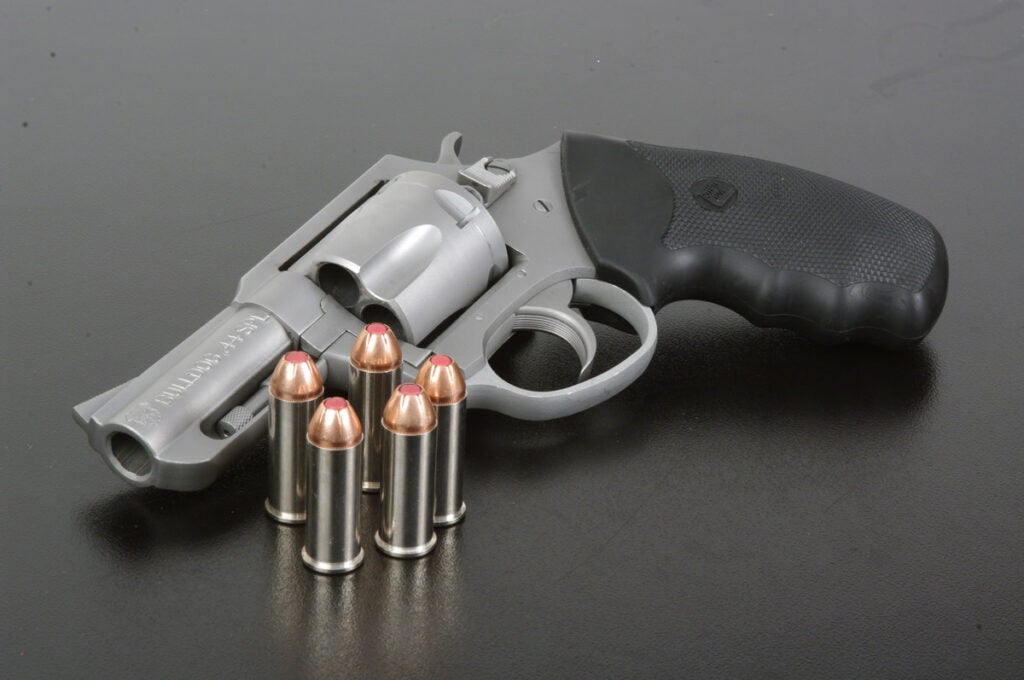 The Bulldog had its 15 minutes of fame when David Berkowitz, also known as Son of Sam and the .44 Caliber Killer, used one during his reign of terror in New York City during the summer of 1976. That story is yet another illustration that it’s not the gun but the shooter who determines if a gun is used for good or evil. It was just a pity that the good people of New York were not allowed to have the same gun.

Who knows, it might have ended differently and a lot of young people could have grown old. I have a Bulldog today and it’s a lot of thump in a small, simple revolver. At 21 ounces, this gun is a little larger than the smaller .38 Specials, but it uses the much larger .44 Special cartridge, which can be a formidable round for defense. With some of the newer ammo, like Hornady’s Flex-Tip loads, it’s an excellent personal-defense cartridge.

You can never have enough options when it comes to choosing a personal defense handgun. If you’ve been convinced to choose a revolver over a semi-auto handgun, here are two more options to help with your choice.

The .44 Magnum has been my favorite revolver cartridge for years. I started with an S&W Model 29, 6½-inch barrel—the same gun Dirty Harry used—and I have owned just about every other .44 Magnum on the market over the years.

My latest favorite is a custom Model 629 revolver that Mag-na-port worked on for me. It has a 2.5-inch barrel and a K-Frame round butt grip. I find that this lightweight .44 is very handy to carry for both urban and wilderness settings.

This revolver is so small that I carry it in my pocket like a pocketknife. It weighs 4.5 ounces, and most of the time I forget it’s there, which is part of its charm. While I have finished off wounded game with it, I mostly think of it as a last resort, hideout gun.