Winter losses could be heavy this season 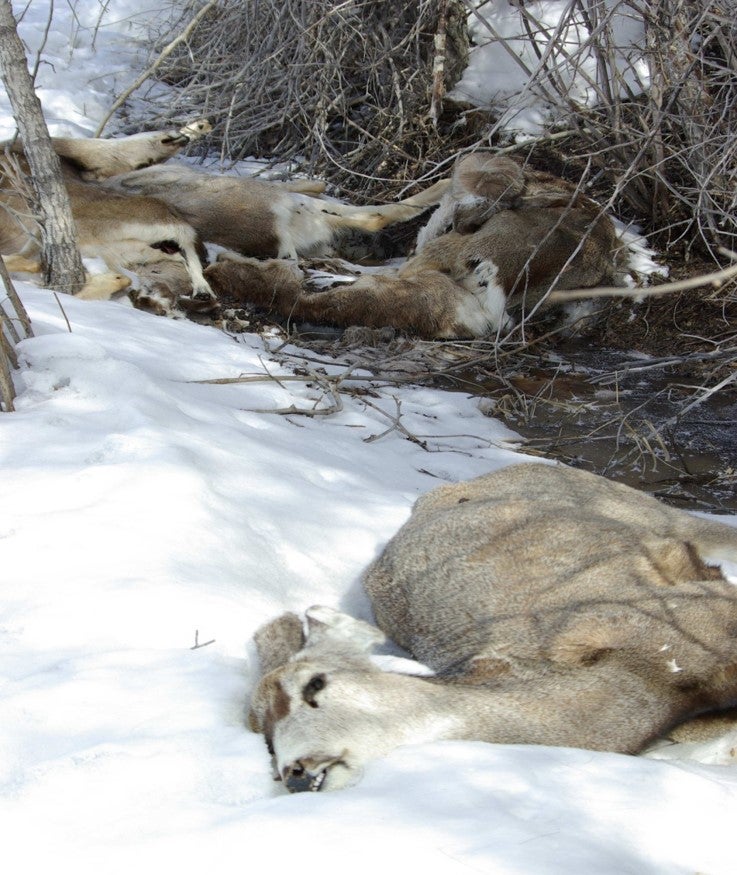 Heavy snow and cold temperatures across much of the western United States have already stressed wintering elk and deer. In Colorado’s Gunnison Basin, steps are being taken to intervene.

The winter storms that delivered much-needed drought relief to the West Coast didn’t stop in the Sierra Nevadas. They continued east and dumped heavy snow in parts of the Rocky Mountain West.

According to the National Weather Service, areas like southwestern Colorado have seen a 30 percent increase in snowpack in just the last three weeks, boosting snow levels to 170 percent of normal, a godsend for ski resorts like Crested Butte Mountain Resort. But what is great for skiers isn’t necessarily good for wildlife.

Running west from Monarch Pass 30 miles down toward the mountain town of Gunnison, U.S. Highway 50 looks different this year. Heavy snow has returned to the Colorado High Country after several relatively mild winters.

Ranches and homes are buried in deep snow. Angus cattle huddle in white pastures along scattered hay lines. If you look up on the adjacent slopes above, fence lines are barely visible, buried in more than 50 inches of fresh snow. Then you begin to see dark silhouettes in the blinding whiteness. Small clusters of mule deer become visible. Large herds of elk can be seen on the low ridges. And along the roadway in the ditches, wildlife fatalities are surrounded by hungry magpies and crows and the carcasses become more numerous the closer you get to Gunnison.

With snowpack levels rising steadily in southwestern Colorado, deer and elk herds have moved to lower elevations to their winter ranges. Although they are currently in good physical condition, things could deteriorate with the arrival of extreme temperatures, which is not uncommon in the Gunnison Basin, underscoring the concern of local sportsmen.

Gunnison is consistently ranked among the coldest spots in the country. The coldest temperature ever recorded in Gunnison was -47 degrees and a record cold temperature at nearby Blue Mesa Reservoir once dropped the mercury to -60 degrees. Deep snow combined with those kinds of temperatures place a heavy burden on big game animals, which is why wildlife officials will keep a close eye on the wildlife in the weeks and months ahead.

A meeting was held in Gunnison on Thursday, January 19, to address the escalating number of vehicle strikes on deer and elk along a 50-mile stretch of U.S. Highway 50 in the Gunnison Basin. To draw the wildlife away from the busy roadway, officials with Colorado Parks and Wildlife have agreed to begin a baiting operation.

“Our goals are to protect drivers and their passengers by preventing wildlife-vehicle collisions and to be ready to go into a feeding operation if necessary,” the CPW announced by press release. But even this temporary measure is not without controversy. Cost of the feeding operation, the potential spread of disease and the long-term damage to the winter range are all concerns.

The last full-blown winter feeding operation conducted in the Gunnison Basin happened during the winter of 2007-2008 when a sustained period of extreme cold, combined with more than 100 inches in snow, resulted in the loss of more than 30 percent of the fawns and female mule deer. That feeding operation cost the state approximately $2.8 million.

Is a wildlife feeding program cost-justified? Sportsmen believe it is and point to study released in 1996 that concluded a winter feeding program conducted on only 5 percent of Colorado’s mule deer range resulted in a 2.6 percent increase in the number of bucks harvested. Assuming each buck was given a food value of $250 each, “the study reported an economic benefit of $3.6 million resulting from total feeding costs of only $1 million.” The same study also assumed a maximum economic benefit of roughly $1,200 “to local communities for each extra buck harvested as a result of feeding.”

That cost benefit skyrocketed to roughly $18 million from the $1 million feeding cost.

Despite the potential economic benefit of helping deer and elk populations survive an extreme winter, there are inherent liabilities. The biggest, of course, is the potential spread of disease by concentrating wildlife – and domesticated livestock – in a common feeding area.

Multiple studies have highlighted the negative consequences of this practice. In fact, wildlife agencies in Utah, Wyoming, Idaho and other western states are openly opposed to feeding operations unless they involve an extreme emergency like an extended drought or severe winter. The overriding philosophy today seems to be that nature will “cull the herd” as it has done for eons without lasting consequences.

During the crippling winter of 2007-2008 when feeding operations were conducted by the Colorado Division of Wildlife to stave off starvation, many valuable lessons were learned. The most important was that wintertime feeding is almost always problematic, according to Stephen Torbit of the U.S. Fish and Wildlife Service.

“If you feed mule deer hay, they can starve with a full belly. They simply cannot digest the food fast enough to meet their needs, whereas elk, bison and cattle can do fine.” So mule deer need high-energy forage and that costs money. More important, says Torbit, is the need to educate the public about the importance of winter ranges. “It’s much cheaper to conserve winter range and educate the public than to feed big game. Most agencies do not believe that you can save enough animals to justify the cost.

Of course some will argue that sportsmen expect you to maintain high populations so they can continue to hunt. And they do have that expectation. But even after feeding, hunting permits are usually cut back and it takes years to rebuild a herd. Gunnison was just now coming back from the devastation from 2007-2008 and the DOW fed extensively (that winter) in the Gunnison Basin.”

Despite losing as many as 4,000 fawns and female mule deer to starvation in the winter of 2007-2008, wildlife managers in Colorado also oppose winter feeding operations in general. But CPW officials will continue to closely monitor the situation in the Gunnison Basin. The short-term baiting operation the CPW has agreed to conduct might be temporary. But it seems highly unlikely that the state will endorse a full-blown feeding operation now or in the foreseeable future unless the current weather pattern intensifies far beyond a normal Colorado winter.