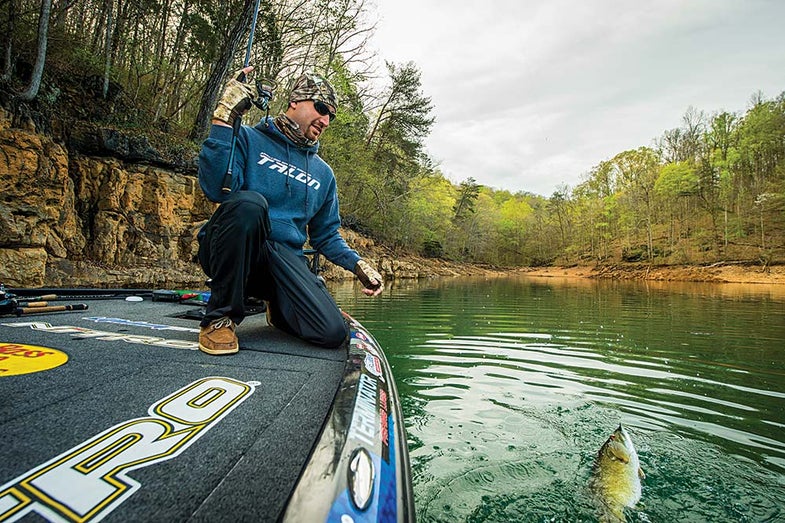 In a few more months, you assure yourself, the smallmouths in your favorite river will be on fire. Lob a 3-inch grub in any direction, turn the reel handle a few times, and you’ll be rewarded with the tug of a scrappy little bass. Summer smallmouth fishing can be that easy. But what about now?

A handful of dedicated, knowledgeable anglers don’t wait for summer. They are pulling spinnerbaits through eddies, dragging jigs behind current breaks, and twitching jerkbaits across deeper pools all winter. They know that there is no better time than February and March to catch the biggest bass in any river.

“You are looking for four or five bites at this time of year, not the 50 or more you can expect in the summer,” says Shawn Hash, who guides on the New River near Blacksburg, Va. “And you have to work for every one. The fish, though, will probably be on average quite a bit bigger than your typical summer smallmouths, so it’s definitely worth it. It’s not out of the question to put 10 or more big fish in the boat on a really good day.”

Some days can be even better. Hash guided a solo client on Valentine’s Day a few years ago who caught and released nearly 30 smallmouths. The smallest was 14 inches; two topped 20 inches, an impressive bass in any free-flowing river.

What defines “just right”? Too many anglers focus on the general water temperature, as if some benchmark number triggers the fish to wake up and eat. However, it’s a bit more complicated than that, insists Hash.

In other words, a slight warm-up can trigger a feeding binge. That temperature change can be as little as two or three degrees. Whatever it is, you don’t need to monitor the water on a daily basis. You just have to watch the weather and schedule your outing to be on the tail end of a warming trend, says Susquehanna Fishing Tackle co-owner and guide George Acord.

“Ideally, I want to go on the last day or two of a three- to five-day temperature increase. It doesn’t matter if the water is 33 or 53 degrees. What matters is that the water warms up a little, which gets the fish more active,” he says.

Hash and a friend did fished two days prior to that epic Valentine’s Day and caught just two bass; a day later, they caught 16. His client hit the tail end of a warming shift.

The bass came on a combination of jig-and-pigs and deep-diving crankbaits, two of Hash’s go-to winter baits. Since winter bass tend to hug the bottom, it is important to get the bait down to them, says Acord, who frequently throws drop-shot rigs, hair jigs, and tubes.

“I’ll start with faster baits like Alabama rigs and lipless crankbaits that I yo-yo off the bottom, but if the fish aren’t active enough to chase those types of lures, I’ll try dead-sticking a suspending jerkbait, and then I switch to slower, bottom-­bouncing baits like jigs, tubes, and drop-shots,” he says. “Every day is different, so you have to go through a process of elimination. Change baits until you figure out what works best.”

There’s no question that water temperature affects river smallmouths. The colder the water, the slower they tend to move. That’s why both river experts adjust their lures and presentations to match the conditions. Colder water demands a slower, lower presentation. Jig-and-pigs are Hash’s favorite in the coldest water, but he will also bounce crankbaits off the bottom, using a slow, steady retrieve. Dead-sticking soft stickbaits like Yum Dingers can also work in the right situation.

Acord will swing a suspending jerkbait downcurrent, making sure to get the lure as deep as he can. Then he will let it hang in one spot for several seconds before he moves it. There are no steadfast rules, though, no matter what the temperature or weather happens to be.

“It’s not really what you throw, it’s how and where you throw it. I’ve caught big fish on spinnerbaits on 2-foot-deep flats in January,” says Hash. “I know guys who catch them on topwaters in the winter.”

That’s not the norm, but it’s proof that just about anything is possible in the winter. That’s why both anglers focus on traditional winter spots. Deeper holes with current breaks tend to be the best places to cast a lure, but they aren’t always obvious. Nor are they always deep. Depth, says Acord, is relative. In some sections of the Susquehanna, for example, a 6-foot hole is the deepest water around. The New or James might have a 12- or even 18-foot-deep hole.

Pulling a crankbait, dragging a jig, or slow-rolling a spinnerbait through those pockets can produce some impressive smallmouths.