Why You Should Try Jiggerpole Fishing for Bass 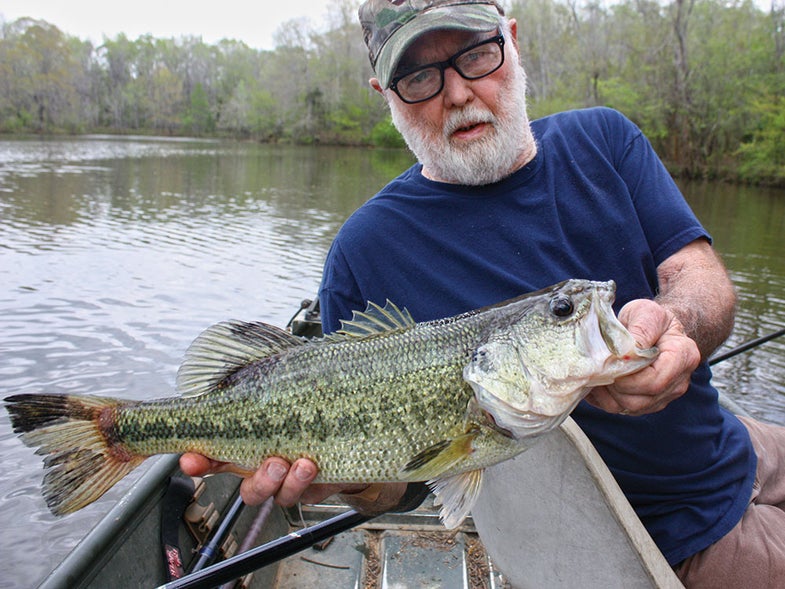 Bert Fisher has long since gotten used to the blank stares and sideways glances. He’s okay, too, when the bass boat set rushes past his quiet slough on the Alabama River headed for an up-​­current hotspot. Fisher prefers to get his adrenaline rush another way—catching largemouths using a tactic that seems an odd mash-up of deep meditation and utter chaos.

Most days see the spry 78-year-old from Selma, Ala., sitting up front in his johnboat holding a 20-foot Shakespeare Wonder Pole in both hands and slowly cruising the shorelines with a trolling motor. When he finds a partially submerged tree or some likely looking vegetation, he places his lure and his right hand begins a rhythmic jiggle. The rod’s tip taps the water just in front of his lure, creating a tiny, repetitive splash. After a while, the tapping becomes almost hypnotic, until the lure disappears in a swirl and a splash, and the long black jiggerpole bends double. All of this takes place within 15 feet of the bow. Because the fish is tethered to the rod by just a short-length of heavy line, the pole absorbs all the shock. Fisher slides his hands up the pole, shortening the distance between him and the fish, until he is able to grab its lower lip.

“There, now that’s a decent fish,” he says while sizing up the 4-pound bass. After a brief photo session, it’s returned to the slough’s green waters. And that’s how Bert Fisher gets his kicks.

“This is all I do,” Fisher says as he works a jointed, red-and-white Creek Chub Pikie 2600 around grass beds and woody cover in a nearby slough. “I don’t own a rod-and-reel or any other kind of pole.”

Though somewhat arcane, the time-tested technique, sometimes referred to as doodlesocking, is so effective that most tournament organizations have banned it. It’s easy to see why Fisher and others find it so addictive.

“You go as slow as you can,” Fisher says while studying the bank, “but mostly you’re still going too fast.”

The shallows are where Fisher has the most success. Even in the dead of summer, the fish will be present there at least twice a day.

“It’s right around daylight and then late in the afternoon,” he says. “If it’s cloudy and it doesn’t rain, you can fish all day.”

At peak times, Fisher works the shady sides of tree-lined creeks and sloughs. The fish might not be as hungry or as active as they are in the spring, but the jiggerpole can still entice them to the top.

Hot-weather fish also seek out the shade offered by thick weed beds. They hang out near holes in the grass mats and feed opportunistically on anything that ventures into the small openings. Here, Fisher switches to a weedless frog and uses his long pole to place it in the hole and then work it around to entice a strike. He does the same with his homemade in-line buzzbait, working it back and forth in front of grass beds to pull fish out from underneath.

In midday, when fish tend to go deep, Fisher changes up once more. The big, noisy propellor on his Whopper Plopper can entice bass from startlingly deep water.