Papermouths are in deep trouble when Roger Gant gets in their faces with a chartreuse jig. 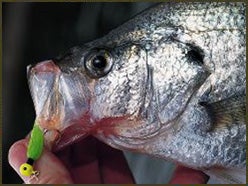 If you can find the areas in a lake or river where crappies spawn, catching a limit of these prized panfish in the spring doesn’t require a lot of expertise. It’s the rest of the year that gives some anglers fits. Before and after the spawn, when crappies stay in deeper water, fishing gets tough. Roger Gant has it figured out, or at least at Pickwick Lake. A longtime guide on the big lake where Tennessee, Alabama and Mississippi converge, Gant adheres to a strict plan year-round for catching slab crappies. His proven method involves slow-trolling small jigs over structure along deep contour lines.

Gant looks for abrupt variances in the bottom such as drop-offs or humps, preferably with cover such as treetops or logs. Provided that baitfish are present in the area, crappies like to stay in deeper water along drop-offs. In the coldest part of winter, Gant starts looking in 20 feet of water and moves deeper from there. When spring starts warming the water, he begins to move up into shallower contours.

The Tennessee fisherman relies on an Eagle depth finder to pinpoint schools of crappies. Once he’s ready to begin his search, he begins to troll along a contour line sideways, aided by a trolling motor mounted on the side of his aluminum boat. “Pulling,” which is Gant’s description of his fishing technique, applies to the sideways approach and to the system by which he and his customers measure out line to fish the right depths. Slow-trolling sideways over the structure allows Gant to create a wider spread, increasing the chances for a bite.

He uses quarter-ounce jigs made by his brother Bill, and his color preferences are red head with chartreuse hair and white head with lime hair. Gant fishes the jigs in a tandem rig and adds a drop of BaitMate Max attractant to the hair of each. In warm weather, he might add a live minnow to the jig. Gant doesn’t fish less than 10 feet deep and usually drops the jigs to a depth between 15 and 25 feet. He measures his “pulls” by engaging the reel and stripping line from the reel to the first rod guide, a known distance. Clients quickly learn to do the same. The rods are then placed in holders mounted on the boat. Gant believes the slightest wiggle made by an angler holding a rod can cause a crappie to ignore the jig, which swims more realistically as the boat trolls slowly along over the submerged structure. “At those depths, the fish don’t care if it’s a quarter-ounce jig,” Gant says.

Crappies prefer cool water temperatures. In spring and autumn, they are even aggressive but become more difficult to catch during the summer. That’s when Gant finds the exact depth where the fish are and swims the jigs in front of them to trigger bites.

“What you’re looking for [BRACKET “in summer”] is the high-percentage strike,” says Gant. “There are some fish that will bite no matter what, and on each drift over the structure you’ll catch those fish. Sometimes they all are aggressive and sometimes they won’t hit a lick. But a few will, and that’s your high-percentage crappie. Then you just keep moving on to the next batch.” Contact: Roger Gant (662-287-2017).