Why I Do Muskie Camp in Northern Wisconsin, and How to Start Your Own

Prehistoric, diabolical, and notoriously difficult to catch, muskies can fire an angler’s spirit like no other fish that swims 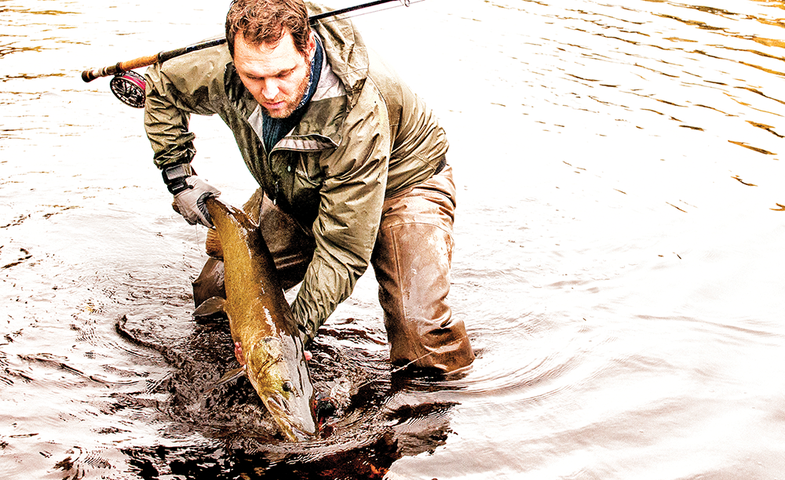 First things first: Muskie camps are not a thing. As far as I know, my friends and I run the only one in existence. I’m not even sure that “camp” is the right word. There’s no wooden plaque with a hand-carved rainbow that would welcome you to a trout camp, only a crush of reeds where we pull the boats up through the brambles and out of sight. Nor is it a deer camp. There’s no wood shack with a wood stove and an 8-pointer on the porch, though we share an indifference to hygiene. No, our muskie retreat is a tent-and-tarp, public-land sort of affair, our only residential luxury the waxed canvas A-frame our spiritual leader—an enthusiast of 18th-century voyageur culture—packs along from time to time. By day, we ply the black water for muskies; by night, we drink whiskey under a dark sky. Sometimes, but not always, we smell like Esox.

Explaining how our first camp came about is simple: We plotted the farthest-most point from any paved road in northern Wisconsin and went to check out the fishing. The river we settled on—it turned out to be a swampy, lowland river that defied development and swallowed two-track trails whole—was so little written about, we didn’t know whether to bring a johnboat or a canoe. That first year we paddled a full 10 miles looking for high ground and eventually found it, along with a wolf pack that either warned or welcomed us; no one can say which. And we caught fish—or, rather, one of us caught enough fish to make the others believe that they could too. And they have.

Explaining how muskie camp happened for the first time is one thing. But accounting for why it stuck, why it became an annual event with all the fixity of Christmas—explaining that is another thing altogether. If I had to come up with an answer—and my editor deems this wise—I’d have to say it’s for the particularly sublime nature of the discoveries made at muskie camp. These are not your everyday bits of knowledge. They have little to no application to the outside world. They won’t make you money or find you love, can’t help you out with a flooded basement or get you out of a traffic ticket. And yet—or maybe because of this—the teachings of muskie camp seem to be essential for the good life, or at least the life I care to live.

● Because of muskie camp, I can think through the origins of faith and its variations, since any muskie fly box is an attempted conversation with the Unknown.

● Because of muskie camp, I know that the shape of a river also has a sound, best played by the stylus of an old Evinrude, best heard over a campfire by someone wondering what, if anything, was caught.

● Because of muskie camp, I know that whiskey has utilities beyond the merely tonic. That on moonless nights it becomes an agent of navigation, conferring if not sight itself, then the conviction of it, which works just as well.

● Because of muskie camp, I know that if you catch one muskie, you cheer, and if you catch two, you row. That bear backstrap is first and foremost a breakfast food, especially when wrapped in venison bacon. That a man who makes a terrible housekeeper and roommate when surrounded by brooms and vacuums can become, when handed an axe, the dictionary definition of neatness.

And lastly, I now know that not all time is created equal—that muskie time, those rare minutes spent in hand-to-hand combat with a fish, is exceptional. Though few in number, these minutes are great in size, towering over all those hours caught in traffic, blotting out years spent staring at a screen. And they keep growing in height, those muskie memories, year after year, trip after trip.

And maybe, in the end, that’s what makes muskie camp so special, the great size of your life there when you look back on it—so tall you can barely, even on a clear day, see the top.

The art of muskie camp begins with picking the perfect location. It’s not enough for access to be limited; the best muskie camps are in such nasty places that access is, in fact, irrelevant. Swampy rivers toward which no road dare creep are where to begin.

▪ Your reel is important for really only one reason: to balance a heavy rod. You will rarely, if ever, use the reel for fighting a fish—flyfishing for muskie is a tug of war. As long as a reel is meaty, it will work.

▪ A 10-weight fly rod is the bare minimum necessary, and the big flies are most easily flung with an 11 or 12 weight. Look for rods with good warranties.

▪ Don’t bother with floating lines. Opt for the most aggressive sink rate available—muskie flies are so buoyant that you’re rarely, if ever, at risk of scraping bottom.

▪ A muskie fly must be felt as well as seen, which means it needs to push water, which means it must be big. Articulated flies composed of 8 to 12 iterations of reverse-tied bucktail are par for the muskie flyfishing course.

▪ Camp life is all about fire, and fire is all about blades. Bringing the holy trinity of hand saw, small axe, and survival knife will give you maximum control over your cuts, splits, and batons.

▪ Tote along a water filter. It doesn’t make a whole lot of sense for your heaviest gear to be water when you’re on a fishing trip.

▪ A good GPS will help you identify feeder creeks, islands, oxbows, camp, the boat launch, and the big waterfall downstream.