The 2009 season was the first time Corey Bailey captured trail cam pics of the giant Kansas whitetail. Then in... 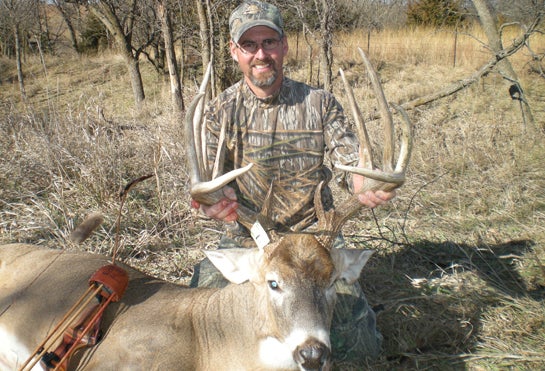 The 2009 season was the first time Corey Bailey captured trail cam pics of the giant Kansas whitetail. Then in 2010 the buck mysteriously disappeared. Without any trail cam photos of the big buck, Corey assumed another hunter had killed him.

Corey continued to hunt the area where the buck had showed up during the 2009 season, but only seemed to cross paths with young bucks on his hunts. Undeterred, he went back to the area again this year.

It was 9:30 in the morning when the action had slowed down and Corey decided to scout a small knoll that jutted out into a cut bean field on one side and butted up against a CRP field on the other side. Corey had never hunted this little corner of the farm before and although he knew the area existed, he simply overlooked it thinking there just wasn’t much to it.

The closer Corey got to the knoll the more he realized just how perfect of a bedding area the secluded spot could be. It was only about ¾ of an acre, but was on a high vantage point where a buck could easily elude a predator.

Corey nocked an arrow and slowly eased along the knoll looking for tines mixed in with the tall brown grass. Halfway through the knoll Corey spotted a huge rack headed his way. Quickly, he crouched down and prepared for a shot at the buck as it headed his way. Corey and the buck met eyes at a mere 20 yards as the buck put on the brakes and came to a halt. It was now or never for Corey. He drew back his recurve and let the string drop. The buck whirled around and ran in the direction he came from. Corey watched as the buck crossed the field and stopped along the edge of the woods with his tail twitching. A few seconds later the buck stumbled, but Corey couldn’t tell if he was down for good or not.

Corey took a seat and watched for an hour, but never saw the buck get up or move. With a second arrow nocked, Corey slowly eased up on the big buck and found him right where he had gone down. Emotions overwhelmed Corey as he dropped to his knees and thanked the Lord while tears streamed down his face. This was Corey’s buck of a lifetime.

The light colored rack of the tall tined buck had eleven points and unofficially scored 183 5/8″. To go with it’s impressive rack, the big bodied buck tipped the scales at 288 pounds.