Brandon Seward sent us these photos of a slammer piebald buck from his family farm in Wakefield, Virginia. A piebald... 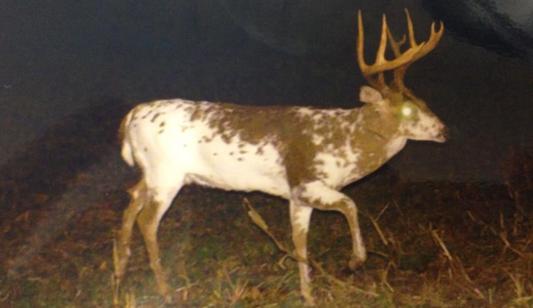 Brandon Seward sent us these photos of a slammer piebald buck from his family farm in Wakefield, Virginia. A piebald buck is fairly rare, but what makes this deer interesting is how big it is. Most of the piebald photos that come across my desk show spike bucks or forks.

In his own words, here’s how Brandon’s hunt went down…

My brother and I had gotten several different trail cam pictures of this deer dating all the way back to 2008. September 2011 was the last picture I personally had of him. I had nearly forgotten about the deer until my neighbor captured him on his trail cam early this hunting season. I couldn’t believe it!

This November the buck started to be seen on a regular basis by several people in our area, but it was primarily at night and on a tract of woods across from our farm that I did not have hunting rights to. Soon a day didn’t pass without someone mentioning the ‘white buck.’

It was slow at work one evening so I decided to slip away at 4:00 and sit on a field until dark. As I was making my way to my treestand, I looked across the field and spotted two smaller bucks feeding. Just as I was deciding neither buck was a shooter, I caught a glimpse of a large rack just over the hill.

I made my way around to the opposite side of the farm where I felt like I could sneak along the wood line and get within shooting range without being spotted. As I got into range and slowly stood to shoot, I realized the nice rack I had seen over the hill belonged to the ‘white buck.’ On December 2, 2013 I went from never laying eyes on this deer in person, to killing it within 15 minutes of leaving work. When I finally got my hands on him, I could hardly control my excitement.