Trail Cameras: What You Need to Know About Whitetail Summer Ranges

I’m a trailcam addict. I’m not afraid to admit that. Sometimes, I wonder for a moment whether I enjoy running... 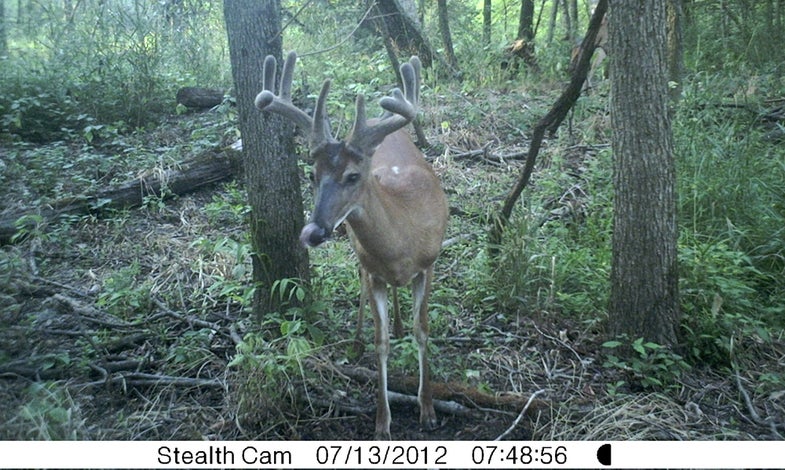 I’m a trailcam addict. I’m not afraid to admit that. Sometimes, I wonder for a moment whether I enjoy running trail cameras more than I enjoy actually hunting the deer I’m trying to capture images of.

Then I come to me senses.

Fact is, as much enjoyment as I get out of running and monitoring trail cameras, I do it for one overriding purpose: To kill deer.

Over the next couple of weeks, I’ll be putting several cameras out on mineral sites hoping to chronicle the antler growth cycle of any bucks that choose to be repeat visitors.

Velvet photos are always cool and watching as antlers develop over the course of the growing season is a great way to get fired up for deer season.

But here’s the rub: I know most of the bucks I capture on camera in the coming months are bucks I’ll never see during hunting season.

This experience is not something that applies to all. Plenty of guys will capture velvet images of bucks throughout the summer and hunt those same bucks this fall.

That said, in many situations, that’s simply not what happens.

I’m a firm believer in the notion of summer and fall ranges – and many deer have a different range in the winter months as well. This is especially true if you’re hunting a smaller parcel of ground. While it’s true that ranges will often overlap, if you’re hunting a piece that’s, say, 80 acres or less the odds of those ranges overlapping is much smaller than if dealing with a much bigger piece of real estate.

I’ve been fortunate to kill several older bucks here in Michigan. Not a single one of which did I have any trail camera images of in the spring or summer months. In fact, those bucks didn’t even show up on camera (or in-field sightings) until mid-October.

So while I enjoy the summer camera work, I also know that I’m likely not capturing images of bucks that I’ll be hunting.

I’m not entirely sure why that is to be perfectly honest. I suspect it has something to do with habitat type and food sources.

While the places I have my spring/summer cameras are farms and will have plenty of ag crops available, they’re far from the only places with the same type of available food.

The difference, then, must be in the makeup of the habitat. For whatever reason, the areas I have to hunt are low ground. They hold water much of the year in certain areas and tend to be fairly thick.

They are, in short, mosquito hell.

A ThermaCELL unit is not optional equipment around here. You use one or suffer the consequences.

Deer, to my knowledge, have never figured out how to run a ThermaCELL unit and don’t have access to copious amounts of DEET. Thus I suspect those bugs push deer to different areas.

I have a ton of trail camera images of bucks with antlers that are literally covered in black flies. I rarely get more than a photo or two of those deer before they disappear.

My theory is that those bucks are simply passing through the area and realize pretty quickly that the property is not all that friendly a place in the heat of summer.

I can understand having bucks that only show up on camera sporadically throughout the spring and summer. They’re not being hunted. Pressure is low. They’re free to move and roam as they wish.

But it does surprise that I have not yet captured an image of an old buck in the spring or summer and then hunted that same deer come fall.

Maybe it’s just the locations I’m hunting and this is all an anomaly. Or maybe there’s more to the summer vs. fall range that we like to believe.

How does this help you be a better deer hunter?

Well, I think there’s a couple of things to take away.

First, if you’re hunting an area that doesn’t hold deer in the spring and summer – or holds only does and fawns then maybe you can address what shortcomings there might be in the habitat that bucks desire.

Second, you shouldn’t get too frustrated by a lack of buck photos right now and into the summer. If you’ve seen bucks there in previous falls, rest assured they’ll be back when the time is right.