Scout before the season? Ignore scrapes? Stay out of bedding areas? Not anymore. I changed my public-land deer hunting strategy and started killing more mature bucks 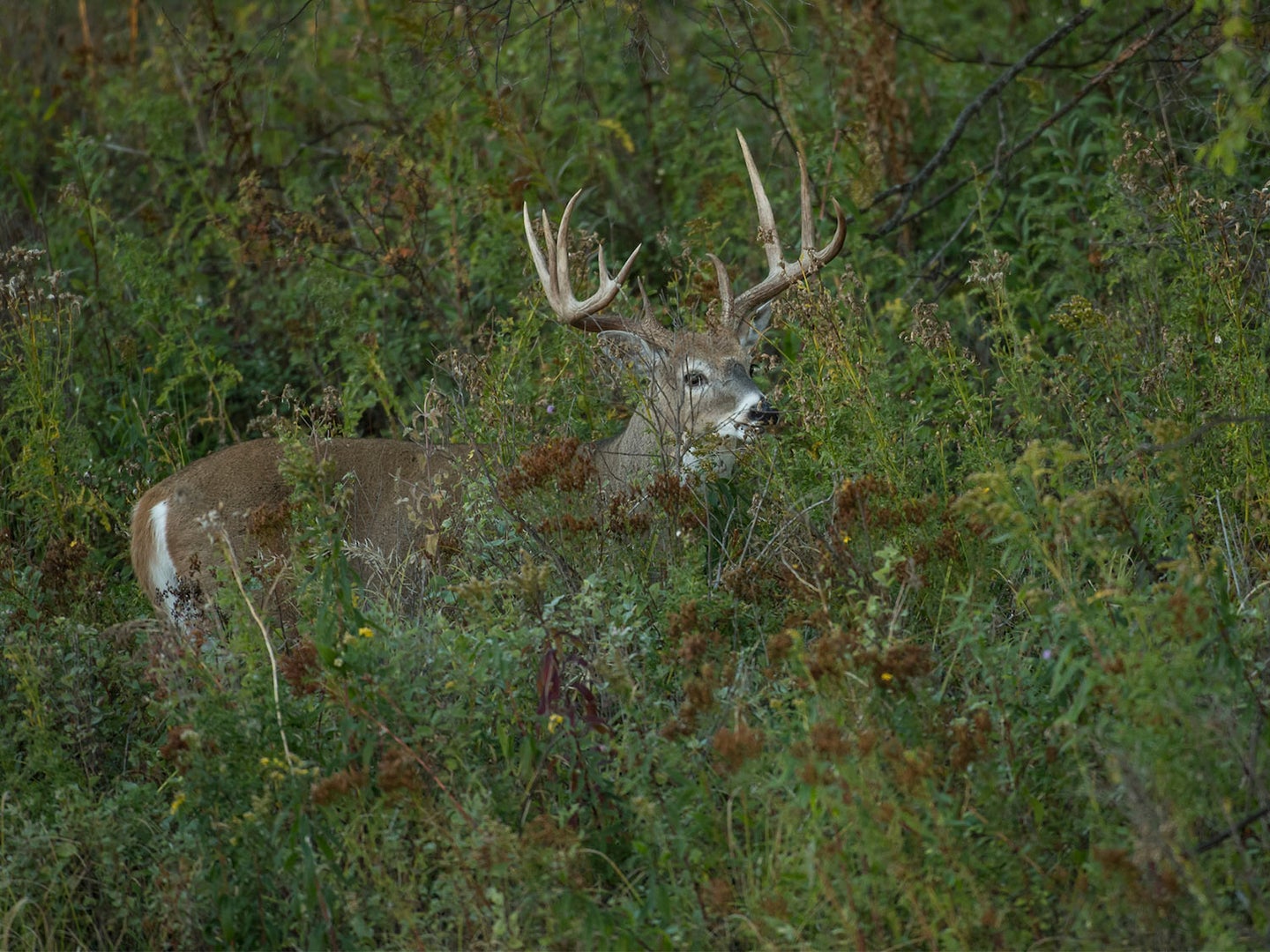 One of the themes that’s developed around our upcoming presidential election is that there seems to be very few “undecided” voters. Most folks have chosen their camp and intend to stay there. I find that kind of sad. Changing your mind is one of the pinnacles of freedom. I change mine often and, when it comes to deer hunting, I’ve changed it almost completely. Changing your mind is one of life’s greatest gifts, and it can be one of your greatest assets in the woods.

We are now nearly a month into the 2020 deer season and I’ve yet to actually hunt. Does that mean I’m taking a year off or that I’m being lazy? Nope. It simply means I’ve learned an awful lot from previous mistakes, and that I’ve admitted to myself that I didn’t know as much as I thought I knew.

It’s really that I’ve changed my overall hunting approach based on experiences, results, and, perhaps most of all, necessity.

In the past, I’d spend untold hours during the summer months getting everything lined up for the coming deer season. Long-range surveillance, trail cameras, food plots—you name it, I did it. Nowadays? Until last week, I hadn’t been in the woods since turkey season. I spent not a single hour watching bean fields or monitoring summer trail cams. Those tactics were fun, but everyday life has gotten in the way and I just don’t have time for them anymore. But here’s the thing: I’m more successful now than I ever was in the past.

Before we dive in too far, it’s best to set the stage for how I developed this approach (and how you can too if my schedule sounds familiar). To be honest, it was quite by accident.

1. Factor in Your Available Time

It’s funny what happens to time. It always seems to find a way to disappear. When I was in college and working a couple of part-time jobs to try and scrape by, it seemed as if I had no time at all. And yet I spent more time hunting and scouting during those years than I ever had before, or since.

Then came married life. A real job. A family. With that came baseball, football, basketball, dance, cheerleading, musicals, and plays. I still hunted. I still scouted. I just did much less of it.

That’s also about the time I finally started to see consistent success on older bucks in the areas I hunt, almost all of which are located in areas of heavy hunting pressure. And the results were hard to ignore. (Read about my “Rule of 3” for hunting mature bucks on public land.) The less preseason scouting and intrusion that took place, the more mature bucks I saw. The more I focused on “right now” sign and less on previoulsy-gathered intel, the more mature bucks I killed.

I love seeing big bucks in velvet during the summer months. I thoroughly enjoy zipping through an SD card full of velvet summer photos. But there is no comparison to the excitement I feel when I see a big buck closing the distance during hunting season when I have a bow in my hand. That’s the difference here. The preseason scouting efforts tell you where deer are…during the summer. In areas with limited hunting pressure and ideal habitat, it’s possible those bucks will hang around through October and November.

I made the mistake of obsessively preseason scouting. Now? I focus intently on scouting when it’s most beneficial—which is right when I’m hunting. I now understand that deer, particularly fully mature bucks in areas of heavy hunting pressure, will respond quickly and dramatically to an increase in human pressure

Essentially, I have two versions of the same in-season scouting process. Which system I employ depends on a recurring theme: My available time.

If I’m away from home and have just a few days to hunt, I’m going to scout as quickly as I can and I’ll be pretty aggressive in doing so. I am typically only going to hunt areas I feel have limited human population and hunting pressure—thus I can pay more attention to obvious sign than in areas around home where hunting pressure is intense. I’m also generally going to focus on hunting during the rut period, so I’m looking for classic rut sign: rubs and scrapes. I place high value on active scrapes and big rubs. If I find an area of active scrapes with a big rub or two, I’m hunting that location. Simple as that.

To find these areas, I’m going to move fast. If using an e-bike is legal on the property I’m hunting, that’s my preferred method and I’ll have a treestand and climbing sticks on the bike’s rack ready to go.

If I’m on a foot-traffic-only area, then I’ll have a pack frame on my back loaded up with a stand and sticks, especially if my virtual scouting has me feeling the area is likely to deliver the type of sign I’m looking for.

If I’m exploring an entirely new area and am unsure about its potential, I’ll leave the stand setup behind so that I can move more quickly. If I find a place for a stand, I’ll hustle back and grab what I need.

3. Don’t Wait for the Perfect Setup

Here’s another mistake I’ve learned to avoid: Spending far too much time thinking I needed to scout, scout, scout until I had located the perfect location. That wasted a whole lot of time. I also believed that you should hunt a place from the outside-in using observation stands to pinpoint deer movement, and adjust locations as needed.

Now, I spend an hour or two aggressively scouting and far more time hunting locations that I feel have the potential to deliver immediate results. When dealing with limited hunting time, that’s made a big-time difference.

I believe hunting pressure is the single-biggest factor on the potential of a property. I base my scouting analysis on the amount of hunting pressure an area receives. If pressure is limited and I know there are a few mature bucks in the area, I’m going to set up on the first exciting sign that I find. I’m not going to waste time looking for that “perfect” location…because a perfect location seldom exists and I’m not going to be dead-set on hunting as far from a parking area as possible. If hunting pressure is light and the sign is active, there’s no logical reason to press deeper. Doing so will only add pressure to the area and waste time.

Read Next: A Strategy for Hunting Mature Bucks on Public Land (That Actually Works in the Real World)

I used to believe that scrapes weren’t worth hunting because, to be honest, I believed too much of my own early theories. The theories and pieces I wrote were based on science-driven data and trail camera images. The fact is, the majority of scrapes are only visited at night. They are only visited a time or two. But this is not true for all scrapes. And this fact has made all the difference. Since I’ve started focusing on active scrapes located near security cover, the big-buck floodgates have opened.

Unlike rubs or trails that can appear active for days, scrapes only stay “fresh” for a short period of time. If I find a scrape that’s free of leaves and other debris, and it smells like a public urinal, I know a buck was there in the last 24 hours or so. When there are multiple hot scrapes in a small area near security cover, I can be confident that the area is drawing bucks.

There’s a lot of chatter about buck beds and buck bedding these days, and it can be confusing. Bucks, especially those that live in heavily hunted areas, spend the bulk of their time around security cover. They also happen to bed there. When I focus on hunting heavy cover, I’m hunting the areas where bucks bed—but I’m not targeting the actual location a buck would bed.

Previously, I did all I could to avoid pressuring a bedding area. That wasn’t a mistake exactly, but I have amended my approach to hunting those areas of thick cover. This is where the speed-scouting sessions really shine. I’m able to cover an area of interest quickly and determine what security cover is likely holding the bucks I want to hunt. I’m not looking for beds. I know the bucks are likely bedding in or very near that cover. I’m still careful in those areas. I don’t want to bump bucks if I can avoid it, but if I’m going to bump them I want to do so in a manner that is less harmful. Sneaking through an area of cover and running into a buck? I consider that to be a harmful encounter. Walking with purpose, making a bit of noise as I go, and allowing a buck to be alerted from a long distance is a much less impactful manner of bumping deer. I’ve learned that it’s very, very difficult to leave zero trace and to be completely silent when scouting. So I go in the opposite direction. I’m not running around like a dozer but I do walk with purpose, and I don’t worry about incidental noise. I get in, find the info I need, set a stand in a promising location, and get out.