Why Greg Myerson is the World’s Greatest Striped Bass Fisherman

I’m just going to go ahead and say it: Greg Myerson is the greatest living striper fisherman. Anyone who has... 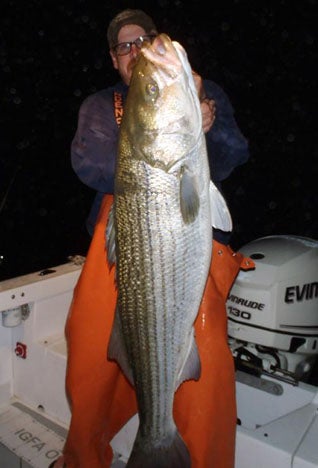 I’m just going to go ahead and say it: Greg Myerson is the greatest living striper fisherman.

Anyone who has credited Greg Myerson’s world-record, 81.8-pound striped bass to luck doesn’t really know the man. Myerson’s catch was the product of years of studying the fishery, honing his skills and catching (and releasing) really big striped bass.

But don’t take my word for it. Here’s some proof:
– Myerson released a 50-inch striped bass in July of 2012, winning the monthly catch-and-release category for On the Water‘s Striper Cup tournament.
– In addition to the world record fish, he landed 61- and 57-pound bass in 2011 and earned Angler of the Year honors.
– He took home those same honors in 2010 with a 68.75-pounder.

How has Myerson been able to land so many massive stripers in such a short amount of time?

Let’s start with his most recent behemoth: a 73-plus-pound fish he caught on July 10 while fishing out of Westbrook, Connecticut (the same place where he caught the record bass two summers ago) with his cousin, Mike Emmerich.

At first the night didn’t seem promising. “When we were heading out it looked rough, it looked like the Bering Sea,” Myerson remembers. “The tide was coming in and we were running against it.”

Myerson was taking the opportunity to test some of his own homemade lures. There’s a precise science to the way Myerson targets stripers. He’s not just hoping to run into one, he’s bringing the big fish to him. “See the fish, catch the fish.”

By using equipment available to him in his line of work as an electrician, Myerson studied the exact frequency and decibel levels created when a lobster moves across the ocean floor. Then he tried to replicate that sound. His years on the water have taught him that big bass prefer lobsters to anything else.

In a 200-gallon aquarium in his house, Myerson used a stethoscope to evaluate the exact sounds his prototype rattling bucktail was making, and compared it to that of a clambering lobster. The lure he developed will soon be sold in stores under his brand name “Fish Call,” and he has already patented the design.

Myerson fished a 1 1/4-ounce Fish Call bucktail that night. He had a small live eel hooked to a stinger hook on the bucktail. He says smaller eels make for better teasers. Both he and Emmerich hooked up simultaneously, and Emmerich was able to land and release his striper before Myerson saw his.

“The fish was just taking off,” Myerson says. “It took about 200 yards of line.” He thinks the conditions that night were working in the fish’s favor. “The night I caught the record, it was like glass out there,” he says.

It took Myerson 30 minutes to coax the enormous bass boatside. “That’s an incredibly long fight for a striper,” Myerson says. “It fought much harder than the world-record striper, harder than any bass I’ve ever caught.

“We got it in the boat and we just looked at it. It was longer than any striped bass I’ve ever caught. It measured 56 inches.”

Myerson, who participates annually in On The Water magazine’s Striper Cup, which awards anglers who catch the largest weighed-in bass in both surf and boat divisions, was initially hesitant about keeping the fish.

“But, I figured it would seal the deal for that tournament,” he says.

Myerson says catching a record-breaking fish is a possibility on any given night.

“There are always big fish around, a lot of people don’t realize it because they’re tricky,” he says. “Because [the biggest stripers] have such huge mouths, often the take is subtle. They inhale your bait and spit it out before you realize it.”

Myerson uses 50-pound-test braided line to detect subtle hits. For all the fanfare and excitement that Myerson’s enormous fish created in 2011, he says he’s not fishing for publicity.

“I’m not out there trying to break records,” Myerson says. “When I broke the record I didn’t even know what the record was. I don’t like killing big fish, I let most of them go. I may have even released the world record,” he says.