Capt. Dave Mistretta of the Jaws Too led Diane Marteliz to a 66.8-pound kingfish for her birthday. Photo courtesy of... 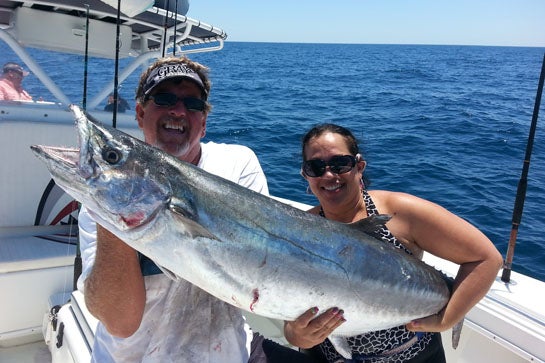 Capt. Dave Mistretta of the Jaws Too led Diane Marteliz to a 66.8-pound kingfish for her birthday. Photo courtesy of Jawstoo.com

Tampa angler Diane Marteliz wanted to go on a fishing trip for her recent birthday. Her husband booked a trip aboard Jaws Too with Capt. Dave Mistretta, a bonafide blue chip kingfish pro, and she ended up with 66.8 pounds of horn-tootin’, birthday wishin’ king mackerel.

“She wanted a king since she never got one before,” said Mistretta. “Boy, did she get one.”

I’ve known Mistretta over 20 years and he’s not exactly one to hold his tongue. But the big guy from Indian Rocks Beach is being way too modest. Martilez’s catch is big stuff on Florida’s West Central Coast.

Giant kings are more common off the drilling rigs of the Northern Gulf and down in Key West, where much of the Gulf’s migratory fish winter in the warmer currents. Anglers launching out of Pinellas County are usually pretty stoked with something in the mid-40s. Anything over 50 pounds has the docks buzzing. In comparison, a king just under 40 pounds won the recent Old Salts King of the Beach Spring Tournament — a tenured event that fields the area’s top talent.

Mistretta said he found the big king about 20 miles offshore in 70 feet of water. Locating bait schools was key, and when Mistretta found a bunch of blue runners ganged up near the surface, he trolled live blue runners around the perimeter.

This was the biggest kingfish ever caught on the Jaws Too.