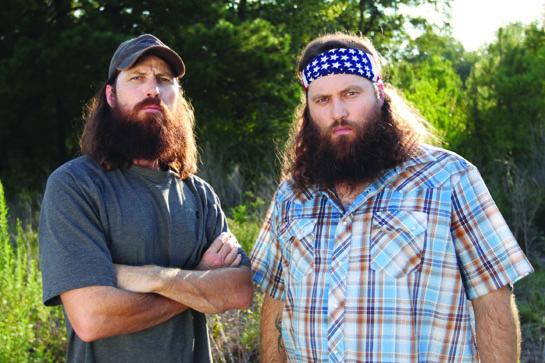 Willie: Our show, Duck Dynasty, is a family show, and the reaction to it has been overwhelmingly positive. But I’ll tell you what–nobody wrote a manual for this. Nobody wrote a manual on how you run a business while all this is happening at the same time.

Jase: When we go out in public now we’re easily recognized. Basically, when you look like we do–before the show, people kept their distance. People thought I was homeless. Now it’s different. I was in Ohio last weekend, my plane got delayed, and I got there 60 seconds before I was going up on stage to speak. When I walked out, there were two families in the front row and they had “Duck Dynasty” spelled out in paint on their chests. People were cheering and hollering. People were going crazy and I hadn’t even said a word.

Willie: We film six days a week for 33 weeks. The producers basically haul us around. Most of the stuff just happens. They create a few scenarios for us to function in, but it’s all real reactions.

Jase: The producers have an idea. And we try to shape that idea into some kind of story, as far as what’s going to happen in that situation.

Willie: It’s not a hunting show. We’ve made those before, and they’re for a different audience. We’re not trying to push an agenda on Duck Dynasty. We’re trying to open a door. I think Hollywood is open to the idea of hunting, but it’s better in smaller doses. I’m surprised there are a lot of non-hunters that come and hear me speak.

Jase: I want to cast hunting in a positive light. There are some stereotypes in our culture that depict hunters as killing anything that moves. One of the reasons I agreed to do this show was because it showed our family, our business. We do a lot for the animals we hunt and put in the pot, and that shows. So now we’ve kind of established that we hunt without showing it.

Jase: Some people think we’re actors, that we’re making this stuff up. I had a guy come up and ask, “Can I touch that beard to see if you’re real?”

Willie: I have a rule: No man may touch my beard.