Ryan Wasser broke the Oklahoma smallmouth bass record when he pulled an 8-pound, 7-ounce smallie from Lake Lawtonka earlier this... 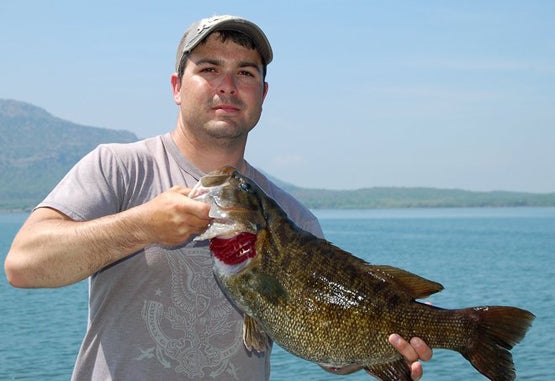 Ryan Wasser broke the Oklahoma smallmouth bass record when he pulled an 8-pound, 7-ounce smallie from Lake Lawtonka earlier this month. Wasser, a resident of Pocasset, told Tulsa World he knew the 23 1/8 inch long with an 18 inch girth fish was a record breaker when he reeled it in.

“I knew I had something pretty close to eight and a half pounds, so I figured I had it by a couple ounces anyway,” Wasser said. “She had eaten and she was full of eggs.” The previous record was set by Steve McLarty in March 2006. His Lake Eufaula fish weighed 8-pounds, 3-ounces, measured 23 1/2 inches long and had a girth of 19 inches.

Wasser caught the fish using a “long” finesse worm on a quarter-ounce shaky football head jig on 10-pound-test fluorocarbon line, using a 7-foot medium-heavy action rod and spinning reel. The catch was witnessed by his mother and 6-year-old son Rylan.

Wasser tried to take the fish to Bass Pro Shops in Oklahoma City for display in its tank but the fish didn’t live long enough to make it to the display. Wasser now has the fish in his freezer and plans on getting it mounted.