Delaware has a new state record striped bass: A 52-pound fish landed by Ben Smith on Dec. 8. Smith, from... 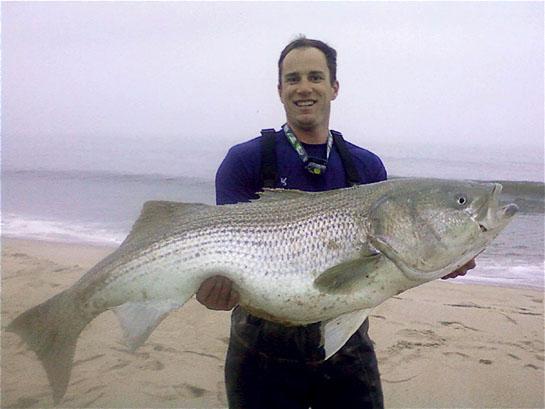 Smith, from Bryn Mawr, Pa., was surf fishing at the Delaware Seashore State Park. The striper measured 51 inches long (yeah, that’s over 4 feet), with a girth of 30 inches. The fish was weighed on certified scale at the Old Inlet Bait & Tackle in Rehoboth Beach and then verified by DNREC’s Division of Fish and Wildlife Enforcement Section Sr. Cpl. Douglas Messeck.

The previous record of 51 pounds, 8 ounces, was set in 1978. While the breaking of this 34-year-old record has excited many in the fishing community, Smith remains modest about his catch.

“I never set out to set a state record. I go fishing for the love of the outdoors, time with friends and the adventure,” Smith told the press.

Clark Evans, a surf fishing instructor with Old Inlet, told the press just how impressed he was with Ben’s catch.

“A striper is known for putting on a big first run, and surviving that first run was the first hurdle,” Evans said. “He did everything right, and even then the odds were stacked against him. I told him, ‘That’s one in a million.'”

Ben, who grew up fishing in the Long Beach Island area with his father and younger brother, said he’s “ecstatic about catching such a great fish.”

He should be. It was a great catch.