A team of researchers working in Wyoming recently documented what is not only the longest migration of mule deer ever... 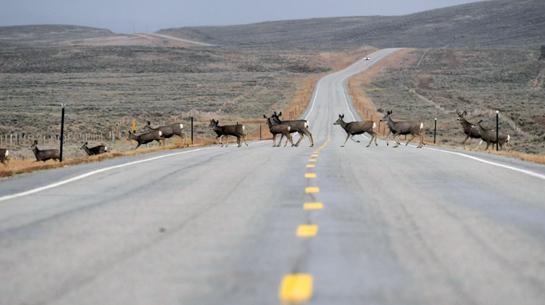 A team of researchers working in Wyoming recently documented what is not only the longest migration of mule deer ever recorded, but also the second longest land migration in North America. The muleys in the study traveled 150 miles from their winter grounds in the Red Desert to their individual summer ranges in the Hoback Basin. These new findings reported by the Wyoming Migration Initiative are part of an overall effort to understand and conserve ungulate migration in Wyoming, according to the Gillette News Record.

Researchers are scheduled to present their findings and photographs from the study tonight at the University of Wyoming. For those of you unwilling or unable to make the trek to campus, you can check out the project’s accompanying video. It shows some great footage of muleys hoofing it across varied terrain and includes commentary by lead wildlife biologist Hall Sawyer.

This extensive migration was initially discovered in 2011 when Sawyer teamed up with the Bureau of Land Management. The group radio-collared what they believed to be a resident herd of mule deer near Rock Springs in the Red Desert. To their surprise, the radio data revealed most of the animals only inhabited the region during the winter months. Come spring, those 500 deer traveled 50 miles north across the desert to join 4,000 to 5,000 other muleys in the western foothills of the Wind River Mountains. The huge herds then traversed a narrow corridor 60 miles along the base of the mountains. Finally, after crossing the Upper Green River Basin, the deer traveled an additional 30 to 50 miles to reach their respective summer ranges in the Hoback Basin.

These muleys rely on seasonal migration to high-elevation summer ranges where they build up fat stores for long Wyoming winters. Deer that participate in this particular migration route spend four months each year traveling between the Red Desert and the Hoback Basin. The route is packed with natural and man-made obstacles, including sand dunes, lake and river crossings, various highways, and more than 100 fences.

“Ungulate migrations require vast, wide-open landscapes, and they are part of what makes Wyoming one of the few truly wild places in the West,” Wyoming Migration Initiative director Matt Kauffman wrote in the migration report. “Our aim is to make research about Wyoming’s ungulate migrations more accessible-and more useful-to people working to manage and conserve these herds and their habitats.”

This includes the Wyoming Game and Fish Department. The agency has said it uses this type of research to make management recommendations for the state’s various species. The Wyoming Migration Initiative extends beyond mule deer movements to research all of the state’s migratory ungulates, which includes pronghorn, elk, moose, and bighorn.