At this point in Ulmer's career, scouting for big muleys in the mountains is the most thrilling part of the hunt 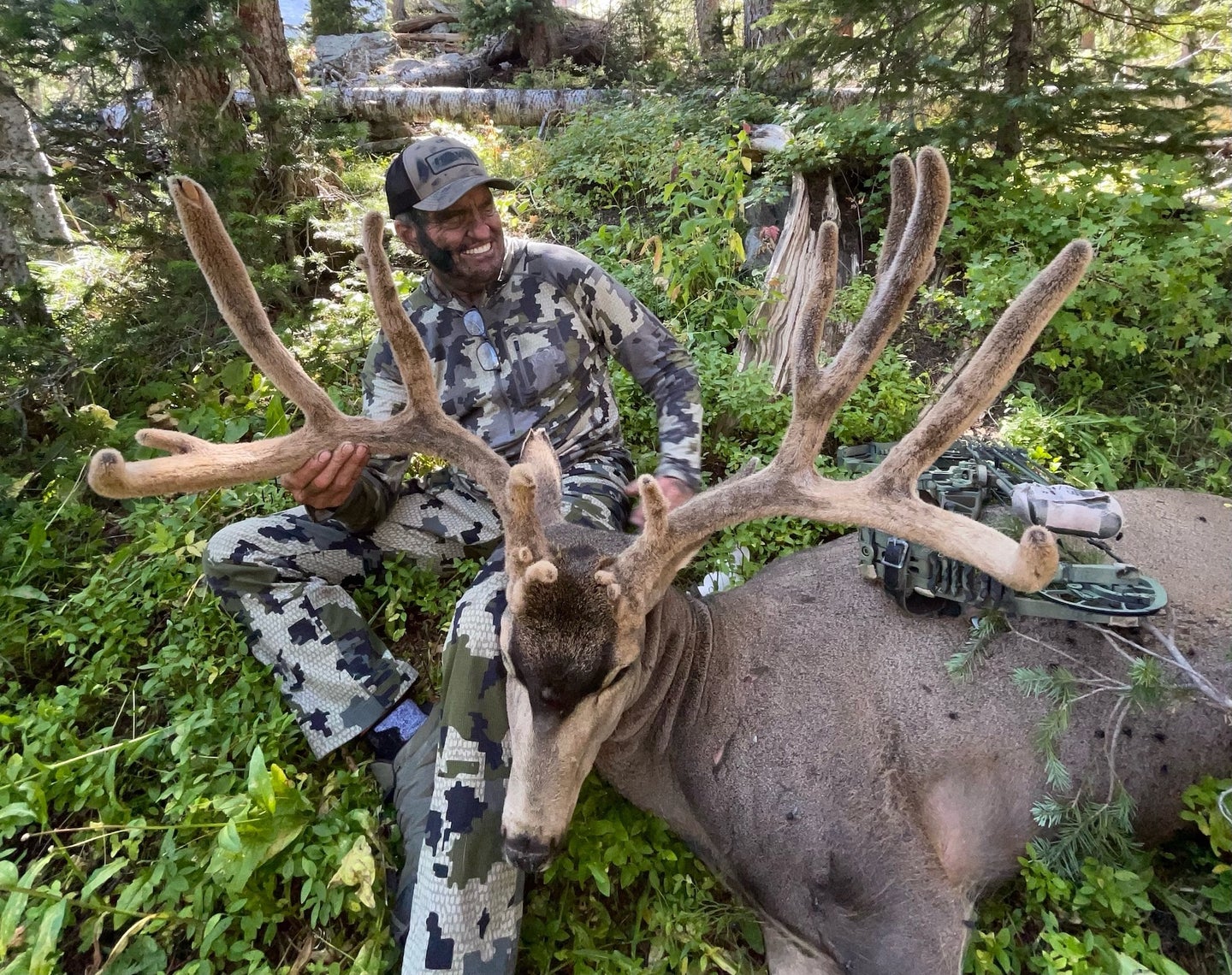 Bowhunting legend Randy Ulmer did it again on the opening day of Colorado’s archery season this fall. After three years of watching the buck grow, Ulmer finally put his tag on a 212-inch muley buck that measured 34 inches wide with 30-inch main beams. The way Ulmer sees it, though, the numbers aren’t important. At this point in his long and storied hunting career, he says, the real reward is hiking deep into the wilderness for weeks at a time to watch big bucks get even bigger.

“It’s just really exciting to go looking for a buck you’ve been watching for a couple years,” Ulmer tells Outdoor Life. “Seeing the buck, and knowing that he survived and has come back, it’s a thrill. Because you’ve been thinking about these deer all winter long, when they do pop out, you’re like, Oh my gosh. It just gives you a special thrill.”

The Importance (and Excitement) of Scouting During the Offseason

Long before Ulmer was inducted into the Bowhunter Hall of Fame in 1999, he earned a reputation for consistently killing huge, mature mule deer bucks with a bow on public land. After doing this year in and year out, he’s learned a thing or two about these animals and how they operate.

“It took me 25 to 30 years of hunting mule deer to kind of figure it out—and I don’t have it all figured out by any stretch,” Ulmer says. “You just make mistake after mistake. You give up, try again, give up, try again, and then you finally figure out some things that work.”

Over all those years, one of the biggest takeaways for Ulmer is that “you gotta find a big buck if you want to shoot a big buck.”

This might sound overly simplistic, but it means a lot more than just getting glass on a big deer a few days before the season starts. For Ulmer, it’s all about the long game.

“I’m very fortunate because I’m older and I’m able to take the summer off and not work too much, so I spend a lot of time looking,” he says. “I’ve always been an endurance athlete and a backpacker, and I’ve always enjoyed the scouting part of it. There’s no pressure, it’s just fun. And you’re in the most beautiful country in the world.”

The native Arizonan has a home in Colorado, and Ulmer spends a lot of his time off in the high country there—especially during the month of August. At this point, he reckons he spends at least 30 to 45 days in the backcountry each summer just looking for deer. He says this has become even more important in recent years, as hunting pressure has increased, and now that the state’s rifle seasons coincide with the rut.

“Not many of them survive the rifle season, so it’s pretty slim pickings,” he explains. “The number of older-age-class bucks in Colorado has been falling precipitously over the last four years. There’s just not very many of them.”

Going back to Ulmer’s decades of experience, however, he’s learned that most of the biggest bucks in the state return to the same basins above timberline every year. So, every summer, he goes back to these locations to see which ones survived last year’s onslaught.

“You only got a few really big bucks, so you go into each of the basins where they were and you’re going, Oh jeez…he’s gone, he’s gone, and he’s gone.”

That’s pretty much what happened this year, Ulmer says, until he returned to one particular basin and found a buck that he’s had his eye on for the past three years.

“He’s been gradually getting bigger and bigger, and he’s in a spot where very few people end up—way, way back in the wilderness,” Ulmer explains. “I watched him last year and the year before, and when I went in this year, he was much bigger. He just blossomed and got really wide. His main beams really grew.”

Seizing an Opportunity on Opening Day

With that buck in mind, Ulmer backpacked into the basin well ahead of opening day. After setting up spike camp with his good friend Payson and his nephew Zach, he went out on Sept. 1—the day before the opener—and got eyes on the buck.

“I slept right at timberline so I’d be close to him,” he says. “And the next morning, I found him hanging out where he always was.”

Getting an early start, Ulmer was able to hike within 400 yards of the deer by the time the sun came up. But since he was in a big, open, round basin, he says it was difficult to make a stalk without getting busted. Staying well out of sight, he crawled into a small avalanche chute and got comfortable. Then he waited…and waited. And then he waited some more.

“I hung out there all day and he just never got in position. The wind was never right for me to make a stalk on him.”

Just before sunset, Ulmer caught a lucky break. A backpacker (who wasn’t hunting) had made it up to the basin by that point, and although he was roughly three quarters of a mile away from the buck Ulmer was watching, he was close enough to spook the buck off his bed and down into the trees. The deer wasn’t terribly spooked though, and just as soon as he ran away, the buck started working his way back.

Ulmer seized the opportunity. After crawling out of the avalanche chute, he started working his way across the basin little by little while the deer, unawares, headed straight at Ulmer from the opposite direction. Ulmer was eventually able to sneak within shooting range. He drew his Hoyt Ventom Pro 33 and released. His Easton pro comp arrow, fitted with a SEVR broadhead, found its mark. The buck ran a short ways downhill, where he crashed among the trees.

“Looking back on it,” Ulmer says, “it was almost good that the hiker scared [him] because I don’t know if I’d have gotten an opportunity otherwise. The other big thing was just being patient. Fifteen to 20 years ago, I wouldn’t have laid down in that avalanche chute all day. I wouldn’t have had the patience. But that’s what you have to do sometimes to get an opportunity.”