Photo by WFT Two Alabama anglers hooked into some major trouble when they were busted for potentially cheating in a... 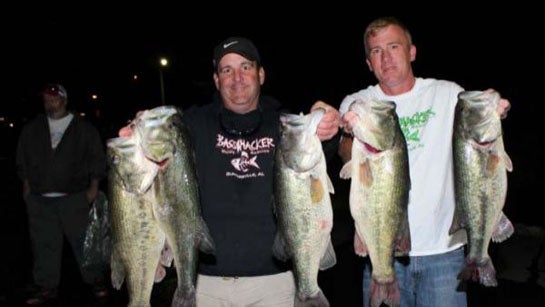 Two Alabama anglers hooked into some major trouble when they were busted for potentially cheating in a fishing tournament.

Robert Gillaspie and Gary Lee Minor Jr. stand accused of catching bass prior to the last week’s Owls Fishing Tournament and then claiming they caught last Tuesday and Thursday evening. Information about the cheating came via an anonymous tip.

Once discovered, the Marshall County men were arrested and charged by Alabama Fish and Game officers with tampering with a sporting event. Tournament officials are outraged at the cheating.

“I just hope they and all these other people that even think about it think twice before they do it, because it’s going to ruin their lives. Not only from fishing, their family, their work; it’s going to affect all that,” Jerry Nyman, tournament director, told WAFF.

The men were booked into the Marshall County Jail Thursday and released on $5,000 bond. The men are due in court June 18 and have been banned from participating in any future tournament events.