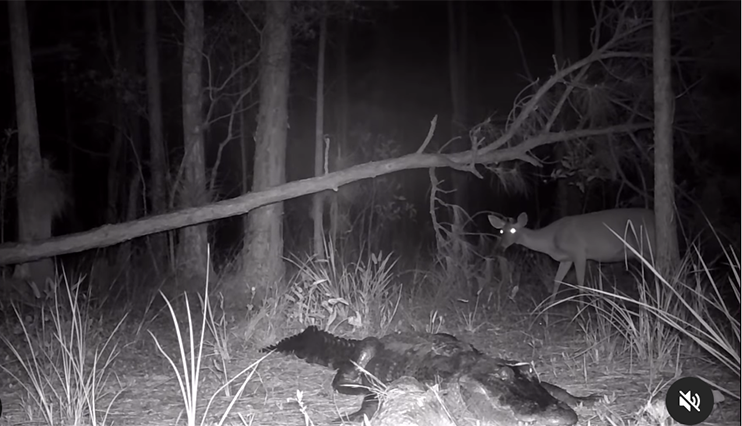 A Nighttime trail camera capture of a Florida gator and a whitetail. Bobby Wummer
SHARE

Bobby Wummer has spent the last 10 years filming and photographing wildlife in South Florida. Over that time, he’s learned a lot about the state’s most treasured wildlife species, and how to stealthily capture footage of these critters in their element. Trail cameras have become an essential part of that strategy, says Wummer, who regularly shares these photographs and videos to his Instagram page.

“The trail cameras definitely help me out, and I get to actually capture videos that I never would have gotten otherwise,” Wummer tells Outdoor Life. “You’re not disturbing these animals when you do it, that’s the greatest part. I’ve gotten videos of bobcats crying for their mates, gators bellowing, panthers talking—I even got a Florida mink in the swamp, and very rarely do you ever see those.”

Wummer lives in Palm Beach County, which lies on the Atlantic coast roughly 70 miles north of Miami. He’s been there since childhood, and he worked on the local police force for about 30 years before retiring and diving headfirst into wildlife photography. He’s seen plenty of changes over the years as Florida’s population has grown and development has accelerated, but he says there are still plenty of spots where you can find healthy wetlands and wildlife populations.

He spends some of his time in Ocala National Forest, which he calls “the black bear capitol of Florida.” He also makes the occasional trip down to the Everglades, where he’s seen first-hand the destruction that Burmese pythons have wrought on the region’s mammal populations.

“I’m telling you, I had cameras down there for over a year and you just don’t see the amount of mammals that you should,” Wummer says. “I talk to locals and they say that since the pythons showed up, they don’t see any deer. We don’t have the snakes up here yet, or at least I haven’t seen one, but they’re coming. You just can’t catch ‘em all.”

There is, however, another reptile that Wummer spends a lot of time around: alligators. As much as he gets tired of tourists asking him if he’s “seen any gators”—which happens every time they see him in the swamp with a camera—he says he truly enjoys spending time around the big uglies.

“Gators are just fun to watch, and I can spend days out there watching ‘em. I don’t do it from an eye-to-eye point of view. I have a friend that snorkels with ‘em, but I’m not going that far.”

Wummer likes to keep his honey holes to himself, but he says some of his favorite gator spots are located on the far (west) side of Lake Okeechobee. He had at least five trail cameras set up there over the last couple months, but unfortunately most of those were damaged when Hurricane Ian made landfall and flooded the swamps. He explains that since he was specifically targeting alligators and other small critters, he attached the cameras lower on trees. He was unable to retrieve them in time, though, and when he showed up after the hurricane weeks later, a few of them were still underwater.

When he’s not looking for alligators, Wummer likes chasing big bucks in the cypress swamps. He only shoots a camera and isn’t a hunter himself, but he still enjoys putting on a ghillie suit and seeing how close he can get to the deer. Of course, when he’s putting out cameras for whitetails, he focuses more on game trails and places them higher up on the trees. He also makes a point never to face his trail cams due east or west. He knows that deer are most likely to move around sunrise and sunset and tries to avoid direct sunlight on the lenses.

Wummer also appreciates trail cameras for the same reason that most hunters do: they allow him to keep an eye on an area without having to hang around there all day.

“You just can’t stay out there all day in the summertime, or you’ll roast. And at night the mosquitoes will eat you alive,” he says. “As a photographer, it’s just really cool to add [trail cams] to your repertoire. Most of your videos won’t have anything in them, but every now and then you get to see the animals in their own habitat doing wild stuff.”