Hawaiian Axis Deer Are Causing Such Bad Erosion, the Sea Is Turning Brown 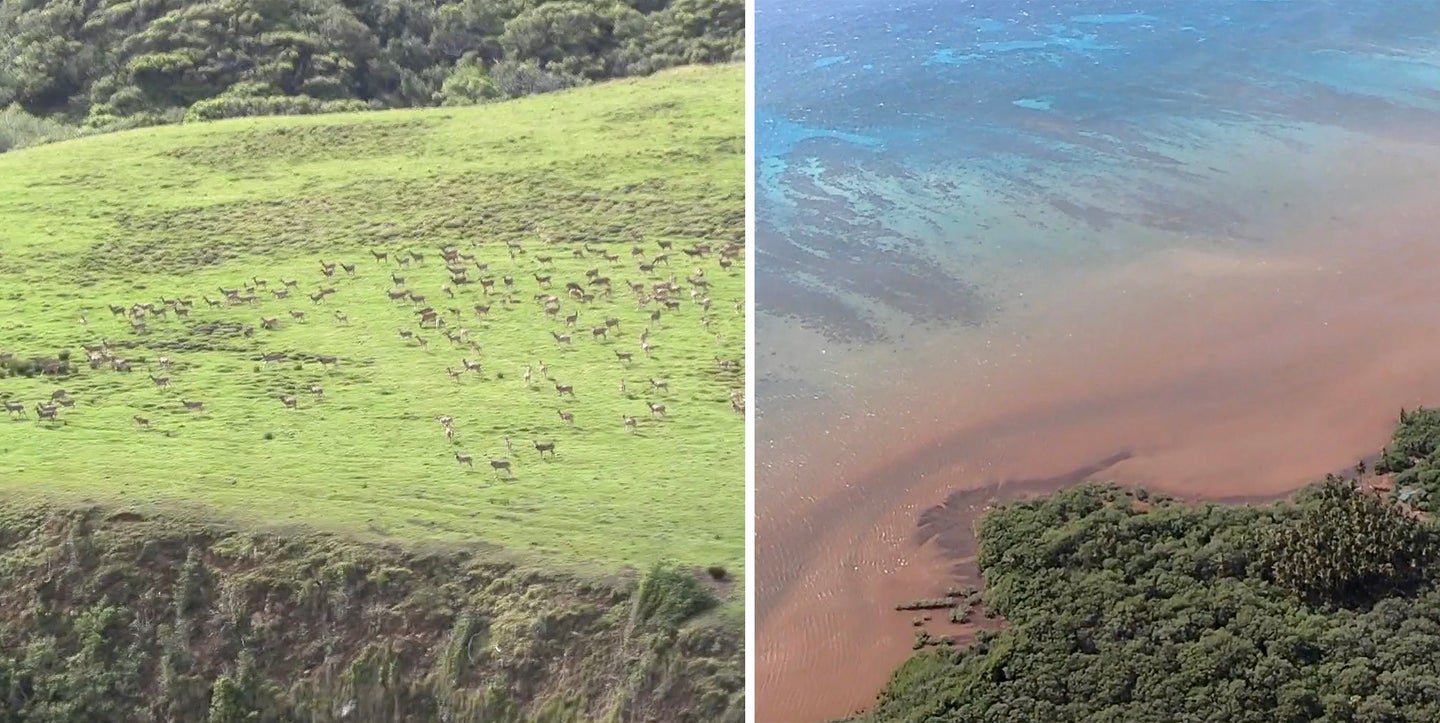 Herds of non-native axis deer are causing over-browsing and extreme erosion on the Hawaiian islands of Maui and Molokai. Hawaii DNR
SHARE

On the Hawaiian islands of Maui and Molokai, axis deer have boomed in number to such an extent that they are denuding ranch lands and native forests. Some areas have been so ravaged by herds of axis deer that they resemble moonscapes. Without native vegetation, erosion is a major problem, and topsoil run-offs can spoil pristine beaches, according to a Jan. 13 report from the Hawaii Department of Land and Natural Resources.

On a recent helicopter flight over Molokai, James Espaniola, a forestry technician with the DLNR Division of Forestry and Wildlife points out massive herds of axis deer in a video posted on the DLNR website. Espaniola says lack of rain has been a problem on portions of the island, and coupled with the over-abundance of axis deer, the land is being devastated. The video from the air shows herds of running deer, flowing across the land like a colony of fast-moving ants.

Read Next, on Apple News: The Meat Hunters of Old Hawaii

“Cattle ranchers have been the hardest hit,” Espaniola explains. “They do their part in rotating the use of pasture lands to prevent overgrazing by moving their cows around. Unfortunately, the deer remain, and they devour any living vegetation, which doesn’t allow for plant regeneration.”

According to DLNR, the non-native forest around the airport on Molokai is a stark example of the island deer crisis. Every tree is devoid of greenery. In heavy rain the lack of ground cover and healthy trees to slow rain penetration into the ground causes excessive runoff, which eventually flows to the ocean and near-shore reefs. After a big rain last month, waters along the south shore of Molokai were chocolate brown for hundreds of feet off the island.

“Axis deer are spreading into deep valleys and remote ridges, where they trample and eat plants and spread invasive weeds,“ says DLNR Chair Suzanne Case. “We need to protect our native forests because they capture rain and cloud moisture, replenishing freshwater streams and underground water sources. When hooved animals, all of which are not native to Hawaii, turn these ancient forests into bare ground, the steep mountainsides rapidly erode, which deposit mud on beaches and coral reefs.”

Fencing some areas has been helpful to control deer herds and overgrazing. But it’s not enough, particularly in lower elevation areas near communities and agricultural regions, according to Scott Fretz, the DOFAW Maui Branch Manager.

Read Next: Meet the Godfather of Hawaiian Market Hunting for Axis Deer

Fretz says wildlife control permits and other hunting efforts tally more than 7,000 axis deer annually harvested on Maui. DOFAW staff is working to establish additional public hunting agreements with private landowners. There is no limit on how many axis deer hunters can take. DOFAW is encouraging hunters not only to focus on bucks, but to cull does, too. A recent university study on Maui’s axis deer populations found does made up 70 percent of the herds. According to the study, “effectively reducing axis deer will most likely require an annual removal of approximately 20 to 30 percent of the population with a greater proportion of females to increase population decline.”