"I thought it was a very interesting survival tactic..." 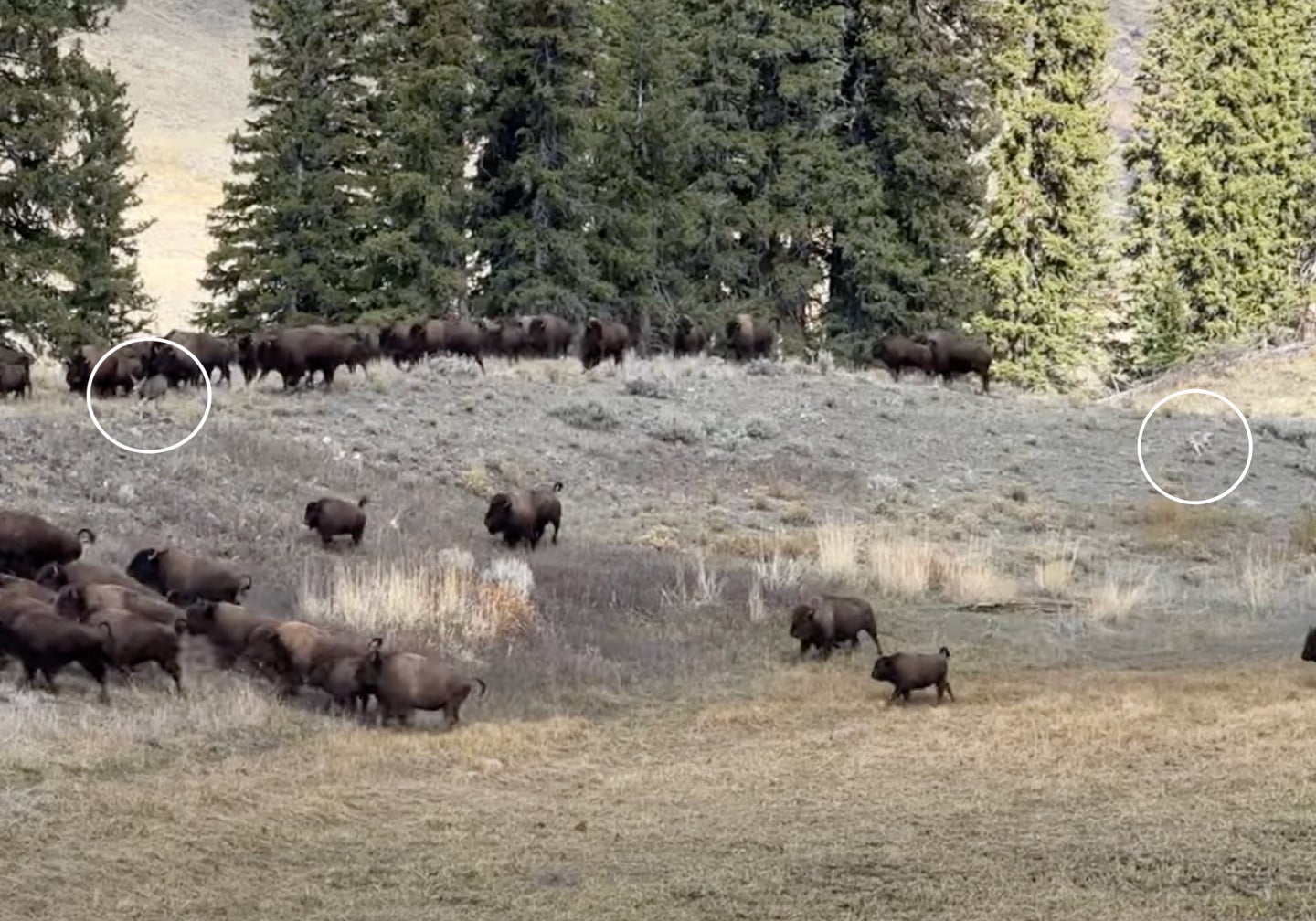 The coyote was hot on the deer's tail until it slipped into a crowd of America's biggest mammals. Katie LaSalle-Lowery / ViralHog
SHARE

Katie LaSalle-Lowery didn’t expect to see much when she jumped out of her Jeep in the Lamar Valley of Yellowstone National Park on Saturday, Oct. 15. The avid wildlife photographer just saw a herd of bison traveling in the distance and was hoping to catch a glimpse of a good stampede. Her professional-grade cameras stayed in the passenger seat and she brought only her cell phone.

Luckily, the camera on her phone was strong enough to pick up crisp footage of Yellowstone’s food chain in action. She watched and filmed as a mule deer doe raced straight into the brown, fluffy crowd to evade a coyote, which screeched to a halt right outside the churning mass as if running into a fence.

“Holy s***. This could get really interesting,” LaSalle-Lowery remarks in the video. There was some question if the predator in pursuit was a wolf or a coyote, but once it gets closer to the camera, the telling fluffy tail floats out from behind the gray body into view.

“I’m a regular visitor to Yellowstone, and the floods in June reduced access dramatically. The Northeast Entrance Road going through the Lamar Valley opened for the first time on Saturday, so I made a trip to the park and a return to the Lamar and see the changes to the riverbed and roads,” LaSalle-Lowery tells Outdoor Life. “I went up Slough Creek, which is a gravel road that goes to campgrounds and trailheads, and there was a herd of bison moving and occasionally stampeding. A few people nearby remarked upon the mule deer. At first folks thought it was a wolf in pursuit, but it quickly became evident that it was a coyote. I thought it was a very interesting survival tactic, for a mule deer to run into the herd of bison, which obviously stopped a single coyote in its tracks.”

Eventually the coyote takes off into the woods as more bison stroll into the frame. The mule deer also disappears, gone to live another day in one of the most predator-rich ecosystems in America.

“When I was a kid, there were no mule deer in Yellowstone. That’s one of the changes that’s come about in the last 20 or 30 years, a possible trophic effect of the return of the wolves,” says LaSalle-Lowery, who studied wildlife biology at the University of Montana. “There might have been a couple, but we didn’t see them hardly ever until about 20 years ago. Now it’s common to see them.”

An estimated 1,900 mule deer migrate through Yellowstone in the summertime, but most of them winter outside of the park, according to the National Park Service. They tend to stick to the northern part of the park, where deep valleys and river bottoms cut through towering mountains.

As for the man LaSalle-Lowery talks about at the end of the video, she confirmed that he stayed far enough away from the bison, even though he was stranded by Slough Creek for a while while the herd passed.

“It could have ended badly for sure, but he kept his head and he didn’t put himself in harm’s way,” LaSalle-Lowery says. “Circumstances can change very quickly when bison are on the move!”