The study indicates new hunters are happy, hungry for experience and wild meat, and reliant on both tech and public lands 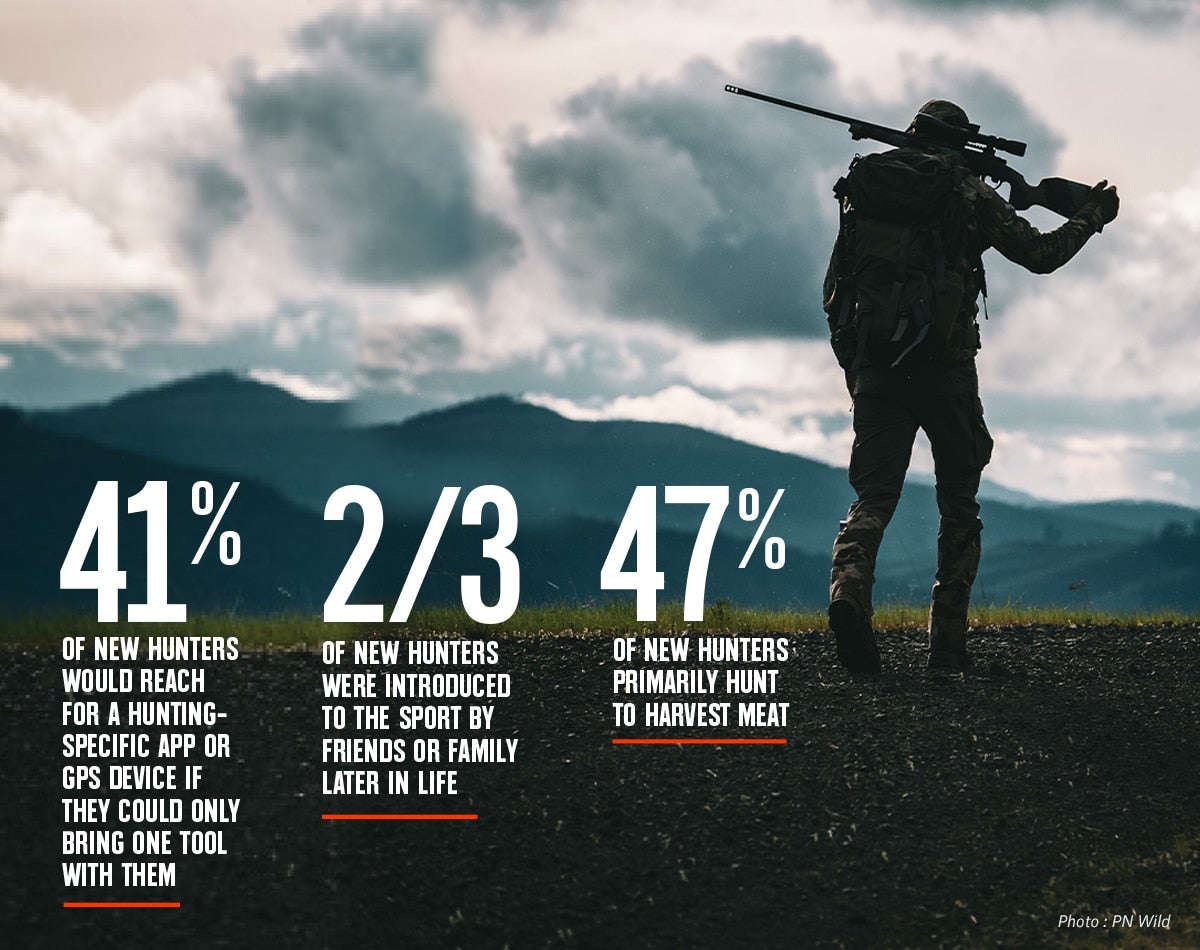 Nearly half of new hunters are primarily driven by harvesting meat. onX
SHARE

A new study of both new and experienced hunters reveals some interesting trends about changing preferences of gear, about how we view newcomers to our spots, and about the reasons why we rise early and endure physical discomfort in the field.

The survey was underwritten by onX, the digital mapping platform that has become as essential to many hunters as a rangefinder or waterproof boots. The Montana-based company hired industry statistician Southwick Associates to conduct the survey of 800 hunters—both experienced and beginners—to determine perspectives on what’s been called the “reset” year of hunting in America: the pandemic year of 2020.

In 2020, the number of hunting license sales jumped around 5 percent across jurisdictions and regions, bucking a downward trend years in the making, according to the Council to Advance the Hunting and the Shooting Sports. A prime energizer seems to be the COVID pandemic, during which Americans increasingly sought outdoor recreation as an escape, a source of healthy local food independent from industrial food chains, and a rediscovery of authentic, self-directed recreation.

Who are these new hunters? Why are they entering the field? What are their needs, in terms of information, guidance, and gear? And what is the impact of all these new recruits on existing hunters?

The onX survey got under the skin of each of those questions. Among the headliners:

The Southwick survey contains a number of other insights. One is that it puts the “pandemic bump” of new hunters close to 25 percent above pre-COVID levels. That’s a lot of fresh folks in the field.

When it comes to the squishier motivations for hunting, experienced hunters said that personal challenges and the opportunity to spend time with friends and family trump other considerations. But new hunters said that being closer to nature and participating in “the thrill of the hunt” compelled them to be in the field.

One of the key national conversations around the topic of new hunters has been how to effectively mentor them. It’s still relevant, even if COVID has done much of the recruitment work and YouTube has done much of the education. It turns out that personal connections to an experienced teacher remains an important determinant for success in the field.

About 44 percent of new hunters said that having a personal mentor was the greatest impact on their success. Reliance on a mentor for success was cited by only about 15 percent of experienced hunters.

So, what does the onX/Southwick survey tell us? The first conclusion—certainly gratifying to a technology company such as onX—is that new hunters are ready customers for digital mapping services, social media, and digital content around hunting.

But a less cynical conclusion is that experienced hunters have a role to play in shaping the experiences and satisfaction of new hunters. We’ll be sharing our spots—especially public-land spots—with this new cohort, and they’re eager to learn from those who have come before.

These new hunters are unlikely to be deterred by a few unsuccessful days in the field, especially if they are motivated by the more intrinsic pulls such as “getting closer to nature” and “the thrill of the hunt.” Validation of that is the 68 percent of new hunters who said they had a “successful” season in 2020. It’s unclear whether success is measured in filling a tag or simply having a rewarding time in the field. But what’s clearer is that 94 percent of these new hunters said they plan to hunt the following season. That’s mighty close to the 99 percent of experienced hunters who recorded the same response.