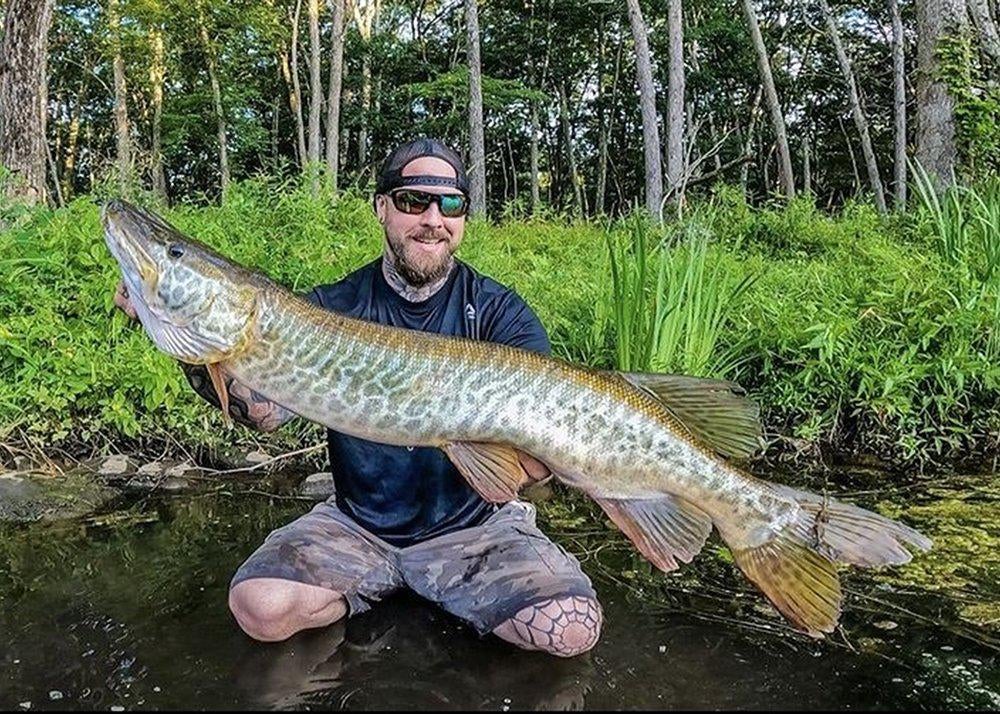 Joe Rivas with one of the tiger muskies he caught last month. Connecticut Fish and Wildlife / Facebook
SHARE

It’s been a good July for Joe Rivas, who caught two huge tiger muskies on two separate trips to Lake Lillonah last month. Rivas’ first fish weighed 26 pounds and measured 41 inches long, according to the Connecticut News-Times. The second fish he caught was closer to 42 inches long, he said, but he was unable to weight it.

Lake Lillonah—which is located in western Connecticut only two hours from New York City—isn’t known as a hotspot for tiger muskie. The species is more common in Midwestern waters. So, when the Connecticut Department of Fish and Wildlife shared a photo of Rivas’ 41-inch fish on July 28, people were surprised. Nearly 400 people had commented on the post as of Aug. 1, with many of them asking how the fish got there in the first place.

CDFW officials confirmed that the state has never stocked tiger muskies, but that it did approve a permit for the Lake Lillinonah Authority to introduce the species five to seven years ago. It appears those fingerlings have not only survived, but thrived, in the time since.

Rivas told the News-Times that he was just as surprised to pull two big tiger muskies from Lillonah last month. He called the first tiger he caught the “fish of a lifetime,” and said he’ll be having a replica made.

“When I saw it flash in the water and I actually saw the wide profile,” he said, “I knew what it was, and the adrenaline just went through the roof.”

All About Tiger Muskies

Tiger muskies are a hybrid fish species known for their aggressive behavior. These hybridizations occur when a male northern pike fertilizes the eggs of a female muskellunge. Because all tiger muskies are sterile, they rarely take hold in water bodies naturally and are typically introduced by fisheries managers.

The first hybridization was successfully conducted in 1965 at the Spirit Lake Hatchery in Iowa, according to the Iowa Department of Natural Resources. The species grew in popularity over time, and within 20 years it was introduced to more than 30 lakes across the state. While Iowa DNR no longer stocks tiger muskies, the species can now be found in water bodies throughout the Midwest.

Anglers love tiger muskies because they’re much more aggressive than pure-strain muskies, and they grow larger that pure-strain northern pike. They are also strikingly beautiful with wavering stripes on their sides—hence the name.

Because tiger muskies are rarely caught in Connecticut, there is no category for the species in the state’s record book. The New York state record is a 35-pound, 8-ounce fish caught by Brett Gofgosky in 1990. Gofgosky’s fish also happens to be an IGFA line-class record for the species.