Mitch Eastabrook had been trying for a decade to top the state’s bowfishing record for bigmouth buffalo, and with this giant fish he finally did 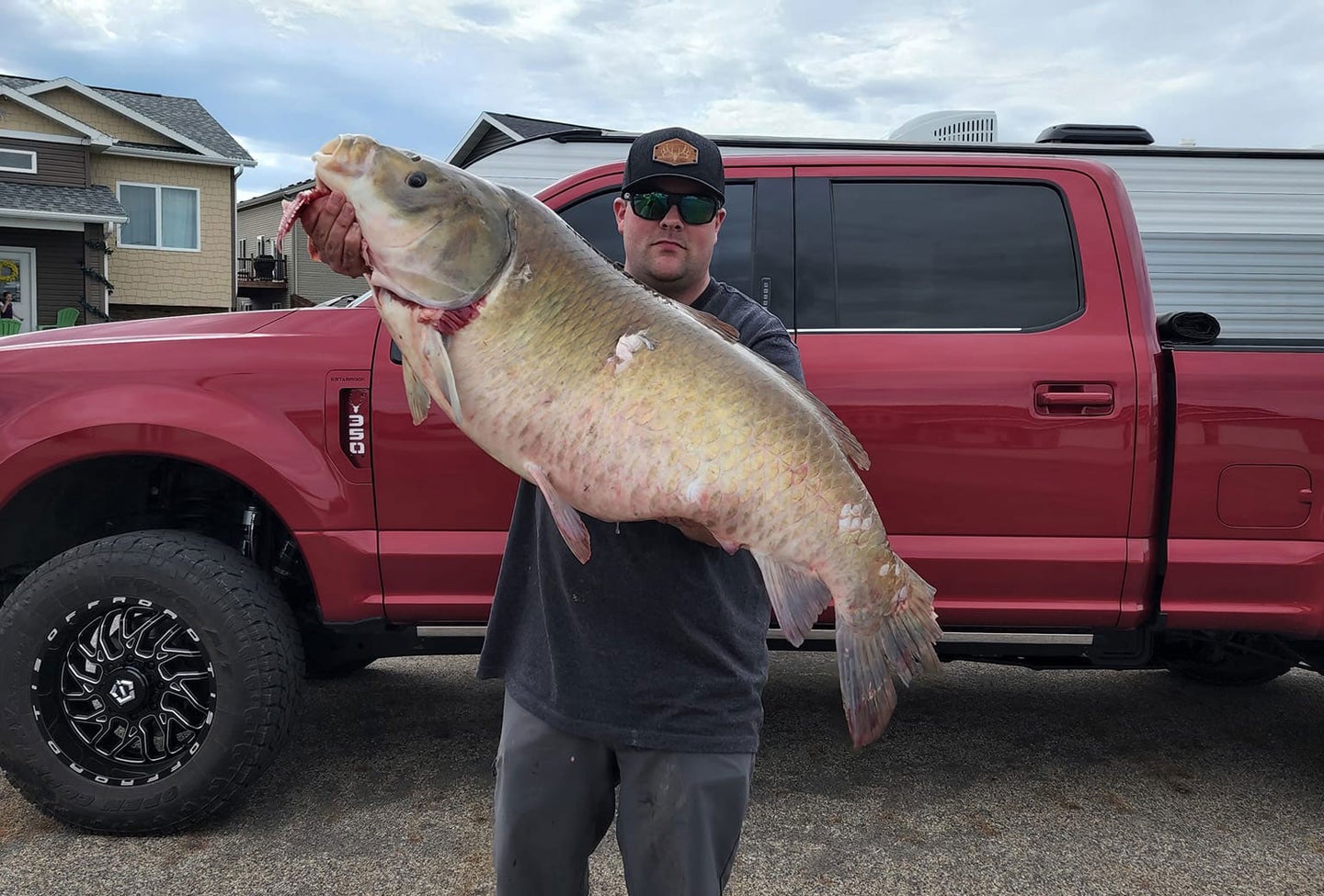 Mitch Eastabrook has been a dedicated bowfisherman for 13 years, and he regularly shoots giant rough fish on his home waters in North Dakota. But on May 16 he shot the biggest fish of his life—it’s also a fish that would break the state record.

“The wind had dropped to less than 10 mph [that morning], and I decided to take a vacation day off work,” said the  31-year old electrician for the Dakota Gasification Co. “I wanted to get my boat out for the first time of the year and shoot some fish to get the rust off my archery gear from a long winter.”

He got his bow tackle and boat, then trailered it to 3,400-acre Heart Butte Reservoir. He launched solo into the lake, then ran his boat upriver into the Heart River and started looking for spring-run, spawning buffalo fish.

“I got on the water and in no time saw some fish,” he says. “Then I went to a couple of my honey holes. Next thing I know I see a school of males surrounding a large female and I knew then that the spawn was on and I hit the water at the best time.”

Eastabrook shot two large fish with his bow, a 38-pound buffalo and a 44-pounder. Both huge archery fish, but he knew bigger ones were around.

“I was being very picky at what I shot,” he says. “I saw a couple hundred fish and was in the boat for about two hours and then spotted a real giant fish about noon.”

The bigmouth buffalo was in about 10 feet of clear water, six feet down, when Eastabrook took his shot with an Oneida Osprey bow.

When the arrow hit, the fight was on, and it took Eastabrook about 15 minutes to battle the brute to the boat.

“I’d get her to the boat, and she would sink and swim back to the bottom again,” he says. “I got her to the side of the boat and hauled her in with a gaff. I knew she was big, so I grabbed my scale and it flew up to 65-pounds.

“My heart started pumping and I had one thought in my mind – I need to get off the water and to a certified scale.”

He raced back to shore with the heavyweight fish in the boat live well.

At the boat ramp he made a video of weighing the fish at 61-pounds, 4.8-ounches. He did this before the fish lost weight, and is sufficient for a Bowfishing Association of America (BAA) state record.

Next, he drove to Bismarck where the last state record buffalo was weighed at a Pony Express station. There, his fish officially weighed 60-pounds, 8-ounces. That’s well above the current 57-pound, 8-ounce bigmouth buffalo arrowed from Heart Butte Reservoir in May 2017 by Derek Larson of Mandan, North Dakota.

“I had a Game and Fish officer confirm the fish and it is now the North Dakota state record. Just waiting on an official news release from them,” says Eastabrook.

READ NEXT: Spear Fishers Shoot Thousands of Pounds of Carp from Lake Powell

Greg Power, chief of the North Dakota Game and Fish Fisheries Division, said he is aware of Estabrook’s fish and said it was likely to be a state record.

BAA has accepted the video evidence of the fish being weighed, and has certified it as the North Dakota bowfishing record for the species at 61-pounds, 4.8-ounces, having a 43-inch length and a 39-inch girth.